These days pretty much  every news item, blog, tweet, report, article, paper, marketing email and blatant sales pitch seems to have a COVID-19 slant. Which is hardly surprising really. But, if you’re anything like me – in which case you have my and, I’m pretty sure, Mrs Oz’s heartfelt sympathies – you probably find it all a bit wearing. So I thought I’d steer clear of it and, instead, dredge up and finish a previously half-written blog from pre-COVID days that has absolutely nothing to do with said virus. So here it is.

Towards the end of last year, back in those dim and distant halcyon days before the world officially went mad and we hardly gave a second thought to going pretty much where we wanted, standing or sitting in close proximity to other people (notwithstanding the fact that, pandemic or not, there are more than enough unsavoury people around that one doesn’t particularly relish being near to), using public transport or visiting a pub/restaurant/café/ hairdresser/gym/sports club/sporting event/theme park/cinema/theatre (delete as applicable), let alone having to wear a face mask or have an argument with some cretin who doesn’t think the rules or guidelines apply to them, Mrs Oz, Barney and I enjoyed a very pleasant and relaxing few days in a cottage in a tiny village called Church Houses, in the Farndale valley in the North Yorkshire Moors.

We’d intended to go away in August or September but, what with work commitments and other stuff going on at the time, including the trials (pun absolutely intended) and tribulations of ‘the great parking fiasco’  we just couldn’t find the time to do it until  mid-November.

Now, my UK-based readers may be thinking that November in the North Yorkshire Moors might be a tad inclement – as did we. But fortune, as they say, favours the brave (or, perhaps, the foolhardy), so we decided to do it anyway. We did, however, think things through and, realising that our previously-purchased ‘extremely waterproof’ dog-walking apparel had, over the course of several years’ regular use, become somewhat less than extremely waterproof we invested in some new ‘extremely waterproof’ coats and trousers (selected and purchased at lightning speed in the few minutes between the end of the famous court case and the subsequent ‘therapy session’, as it happens).

I was, after all, in my youth (albeit more years ago than I care to – or, indeed, can actually remember) a Cub Scout, and the one thing that experience taught me – apart from how to sew on a button and start a fire, both of which were very useful but the latter of which resulted in a massive rollicking from my dad at the age of about nine – was to ‘be prepared’.

However, not unusually, I digress, so back to our holiday. The journey was fairly lengthy, not helped by the torrential rain during most of it, and the fact that we had Barney with us, so we had to stop a couple of times for walkies.

After around five hours, and just a mile or so from our destination, my satnav thought it would be rather amusing (see ‘(Bitten to) death in Venice’) to take us down the steepest, narrowest ‘road’ I can recall ever having driven down. I say road, but a couple of more descriptive words would be ‘dirt track’ and ‘precipice’. If this were a ski resort, it would definitely have been designated a red, if not a black run. As we turned off the ‘main road’ onto said red/black run we did catch a brief glimpse of the sign that said words to the effect of “in  winter don’t even think about using this road”. Which we ignored, obviously. It was, after all, only November.

Despite, or, perhaps because of, the complaints from my car and its out-and-out refusal to change out of second gear, we made it safely to our accommodation. Which was, it has to be said, lovely, made even more so by the fact that no-one was staying in the adjacent cottages so we didn’t have the inconvenience of having to be nice to neighbours. 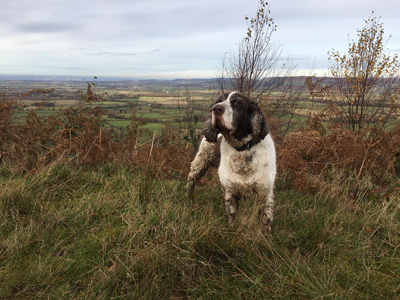 We spent a delightful few days walking miles and miles with Barney through stunning countryside, protected from the elements by our natty new waterproofs, and chilling out, reading and chatting during the evenings. I even played my guitar, which I hadn’t done for months – so it was just as well there were no neighbours around to hear. We also availed ourselves of the board games we found in one of the cupboards. Mrs Oz won the dominoes contest – somewhat convincingly, I have to confess – but I’m delighted to report that the tables were firmly turned in the Scrabble tournament. I suppose that stands to reason really, given that in our business I do the words and Mrs Oz does the numbers – which is actually a pretty fair précis of our respective job descriptions.

I could wax lyrical for several more paragraphs on the relaxedness (if, indeed that’s even a word, which I doubt – as, it seems, does my spellchecker, although that’s far from compelling evidence, given its past history and general linguistic incompetence) and general loveliness of our few days in the North Yorkshire Moors or the various places we visited, but I’ll spare you on this occasion. Instead, I’ll get to the business continuity reference, just in case that’s the reason you’re reading this.

Firstly, preparation is key. Without our ‘extremely waterproof’ attire we’d have spent much of our time in Yorkshire sodden. At the risk of bringing our thoughts back to the dreaded C-word, how many of us can claim we were really prepared for the upheaval we’ve had to go through in recent months, and how many only managed to get through our home working implementation by the skin of our teeth due to the Herculean efforts of our IT and Facilities departments?

Secondly, it’s important that we play to our strengths. In the same way that Mrs Oz and I are, respectively, good at numbers (i.e. financial stuff, to use the proper terminology) and words (i.e. talking quite a lot and writing stuff, or ‘consultancy’, as I like to call it), some people are excellent business as usual managers but, actually, not all that good in a crisis. The problem is that crisis management team roles tend to get assigned on the basis of seniority rather than ability.

Thirdly, if you don’t practise, and practise regularly, you lose your edge. My guitar playing ability these days can be technically described as ‘pants’. Although I had a bit of a go during our holiday and have dabbled now and again since then, I was, and still am, hugely less competent than I used to be. I’m worried that many organisations won’t do any exercising or testing in the foreseeable future on the grounds that “we’ve recently ‘tested’ our business continuity plans”. But just because we got through one particular challenge and are probably better prepared to respond to a similar issue in future, that doesn’t mean we’re automatically prepared for other incidents. And let’s not forget that our other continuity risks haven’t gone away, just because we’ve been focussing on one particular one for the past few months. Fires, floods, cyber attacks, terrorist incidents, earthquakes, extreme weather and all the other things the business continuity plan is there for can and will still happen.

Mrs Oz and I thoroughly enjoyed our brief stay in Farndale and I’d recommend it as a destination if you like the open air, walking (with or without canine company), amazing scenery and aren’t looking for a lively night-life (or, for that matter, a lively day-life). If, in a moment of madness, you decide to go in November, however, take a tip from Cub Scout Oz – ‘be prepared’ and invest in some properly waterproof clobber.

Andy Osborne (known as Oz to friends and colleagues) is the Consultancy Director at Acumen, a consultancy practice specialising in business continuity and risk management. Andy is the author of the books ‘Practical Business Continuity Management’, ‘Risk Management Simplified‘ and ‘Ski Boots and Celery – A Compilation of Oz’s Business Continuity Blogs’, as well as his popular blogs and ‘Tips of the Month’, all of which aim to demystify the subjects of business continuity and risk management and make them more accessible to people who live in the real world.