The devil’s in the detail

Last week my car tax came due for renewal. A simple enough operation, one would assume, particularly as, these days, it can be done online from the comfort of one’s home. If only!

Two weeks previously, the car had its MOT (UK Ministry of Transport) test, needed for the tax renewal, which it passed with flying colours. So far, so good. However, when Mrs Oz attempted to renew the car tax online via the UK Government’s massively user-unfriendly website, she was thwarted by a ‘computer says no’ message suggesting that the vehicle didn’t have a valid MOT certificate.

The message went on to give a phone number for the DVLA (UK’s Driver and Vehicle Licensing Agency), which I duly rang, to be greeted with the usual labyrinth of “press one for this, two for that, three to be plunged into a telephonic black hole”, etc options, none of which really fitted the situation at hand. My first attempt failed dismally. Having navigated the maze of options – interspersed with helpful advice on how to do totally irrelevant and unconnected things and assurances that my call was important (yeah, right) – selecting those that seemed to be the most likely, the final message suggested that I could renew my car tax online and immediately cut me off. How rude.

The second attempt fared no better. I tried a couple of different options, selecting those that seemed most likely to end up with a chance of actually speaking to a real person and, indeed, it seemed that that would be the end result. Except that, after several minutes of irritating muzak, the recorded message cut back in to tell me that “all of our agents are busy at this time and we cannot take your call, goodbye”, at which point I was cut off again.

I tried a third time, this time accompanied by Mrs Oz, who confirmed that the options I was trying were those that she thought were correct. Once again we spiralled into the abyss that ended with a curt goodbye. Mrs Oz agreed in principle with my assessment of the DVLA, their website, automated phone system, concept of customer service and obvious contempt for people who have the misfortune to use their ‘service’, although not quite in the same terms that I used.  I won’t repeat my comments here, lest you think less of me.

Further investigation suggested that my only option was to do the deed in person at a post office. The nearest one to us is a few miles away in Evesham town centre, which I tend to avoid wherever possible due to the almost constant gridlock caused by the incompetence of the ‘planners’ in the local authority’s highways department (I’ll spare you the detail here, as it’s a whole world of needless pain and frustration that probably deserves a blog all of its own) and the fact that it’s degenerated from a once pleasant market town with its own identity to the dull facsimile of pretty much every other once interesting and individual town centre, full of mobile phone shops, rubbish coffee and fast food chains, interspersed with the odd bank, betting shop and loan shark branch.

So I drove into town, the last part of the journey at the usual snail’s pace, parked and went to the post office, only to find it closed. A sign on the door showed a mish-mash of new opening times – clearly designed to cause maximum inconvenience to as many people as possible – including today’s generous two-hour slot, which I’d missed. I photographed the sign, as the complexity of the schedule would have taken far too long to note down, and resolved to return at an appropriate time the following day. 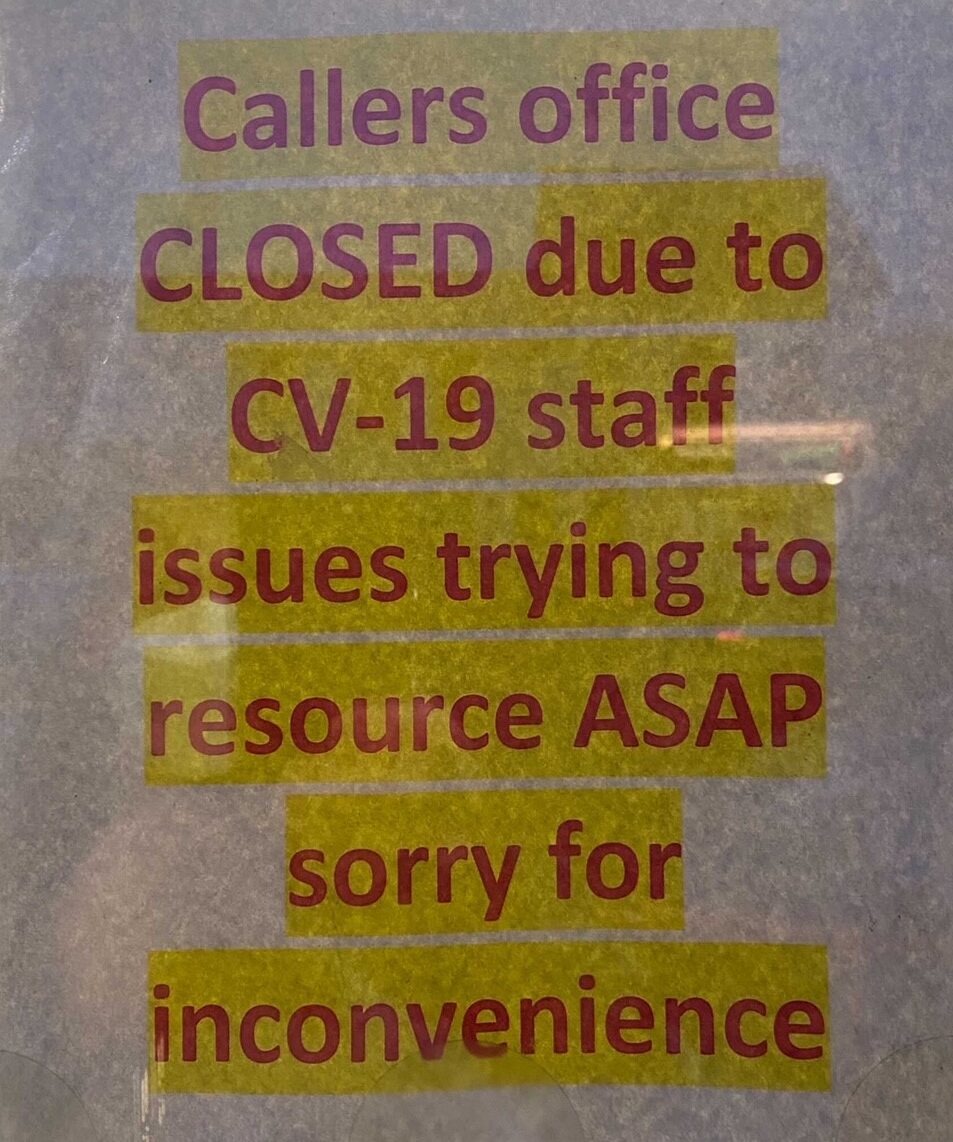 The next day I arrived during one of the advertised open slots, only to find the door locked. A new sign – or, at least, one I hadn’t spotted the previous day – informed me that, due to COVID, they were having staffing difficulties. Fair enough. Although I’ve had to force myself to resist the temptation to comment on the sign-writer’s casual attitude to punctuation (see ‘Reading and Writing‘).

I returned home and explained the situation to Mrs Oz, who pointed out that the door in question belonged to the sorting office, not the post office itself, which was next door. My bad. In fairness, the last time I had cause to visit the sorting office it was situated behind the post office so I felt my error was understandable, until Mrs Oz pointed out that it had moved to its ‘new’ location five years ago.

On the third day I repeated my slow crawl into town, managed to park in a convenient spot without incident or argument and entered the correct building through the correct door. I joined the queue, somehow managing not to say anything to the cretins who either think COVID isn’t a thing any more or who are just plain ignorant and selfish and steadfastly refuse to follow simple guidelines, such as wearing a mask or not standing on top of the person in front, particularly when there are distance markers on the floor and polite signs everywhere asking people to have some consideration for others…and relax. I finally reached the counter to be told that the MOT certificate showed a different vehicle registration number to the one on the tax renewal form – the garage had typed an ‘M’ instead on a ‘N’ – so the post office couldn’t process my application.

As I had to pass the garage on my way home, and had about forty minutes before a scheduled client call, I popped in and explained the problem. The nice lady behind the reception desk was very apologetic and sent me through to the service department, where I explained the problem again. The nice man on the service reception desk apologised profusely, and took my paperwork round the back to one of his colleagues. After a few minutes his colleague returned, apologised profusely and told me that they couldn’t just change the registration, because the computer said no and the only way to get round the problem was to do the MOT test again. Really?! So we had a bit of a chat about it, during which I’m proud to say I remained very calm, but the upshot was that they could either do it right now or next week. As the tax was due to expire in two days, now was really the only option. “It’ll take about half an hour” said the nice man behind the desk. The problem was, I now had twenty minutes before my client meeting, which I couldn’t realistically do from the garage’s waiting area. The nice man checked to see if they had another vehicle they could lend me but they were all booked out (obviously), so I decided to leave my car with them and walk home, which might just about be doable in twenty minutes if I got a bit of a stride on. About three quarters of the way home it became apparent that I wasn’t quite going to make it in time, so I messaged my client with my apologies, only to find that, while I was out and about failing to renew my car tax, they’d rescheduled the meeting to the following day. Ho hum. Half an hour later, I walked back to the garage, collected my car and the corrected certificate, drove to the post office again and successfully completed the operation.

Some people think detail is unimportant, that 80% is good enough and that you “shouldn’t sweat the small stuff”. I beg to differ. If someone had actually sweated the small stuff and bothered to check what was, at the end of the day, quite an important small detail, it would have saved me three trips to the post office (admittedly two of those were down to my lack of knowledge, but I wouldn’t have done them if the paperwork had been correct and I’d been able to renew my tax from the comfort of my PC), two one-and-a-half mile walks (without a dog to benefit from them), a quarter of a tank of petrol (at a time when the UK press was whipping the British public into a frenzy of panic buying fuel), and a day’s lost work. In the scheme of things, whilst inconvenient, these impacts were relatively minor, but in some cases, getting an important detail wrong can have serious consequences. Because a small thing going wrong can easily lead to a chain of events that ends up with a big deal and, sadly, history is littered with the casualties of such chains of events.

The business continuity message here is that, whilst there are undoubtedly occasions where 80% might be good enough, there are others where it’s absolutely crucial to be spot on. Examples of the former might include orders of magnitude rather than precise figures when assessing financial impacts during the business impact analysis or some poor spelling, grammar or punctuation in a report or plan, whilst the latter might include such things as parameters in the technical solutions that protect us from cyber attacks or in plans that enable us to recover systems, or ensuring we record our crisis management decisions accurately so we can justify them if we’re unfortunate enough to have to defend those decisions in court. There are, doubtless, many other examples, but hopefully you get the picture.

So please, do me a favour and sweat the small stuff when it’s important to do so. That few extra seconds required to ensure it’s right might just save someone an awful lot of grief.