If you’ve been on tenterhooks for the last few weeks waiting for news of the bantam’s fate (see ‘The bantam menace‘), I apologise profusely for keeping you hanging, but you can now relax and unhook your tenters as the wait is finally over. I’m pleased to report that, somewhat against the odds, she’s still with us.

Let’s pick up where we left off. After returning home from the vet in something of a state of shock – the bantam from her encounter with next door’s dog and Mrs Oz and I from our encounter with the vet’s bill – we turned our attention to what on earth to do with the patient. Putting her in with our other chickens wasn’t an option, because, a) she wasn’t well enough, b) despite spending time in their general vicinity, she’d never really been accepted by them and c) because chucks have a mean streak and will peck at another’s injuries if they spot a trace of blood (as my sister-in-law can attest, having previously had a large scab on her foot unceremoniously and rather disgustingly, excised by a previous chicken). So we had to keep her isolated (the bantam, that is, not my sister-in-law). The question was how? And where? Which is actually two questions, but who’s counting? Which, technically, is three.

I’d been in the process of building a couple of cold frames, one of which was finished and full of plants and the other partly built. This proved to be quite handy, as I ‘re-purposed’ the part-built one into a bantam-sized isolation unit, which I installed in our garage to keep her out of harm’s way. It would, after all, have been somewhat ironic if she’d survived the mauling by next door’s dog only to be eaten by a fox while she was recovering. 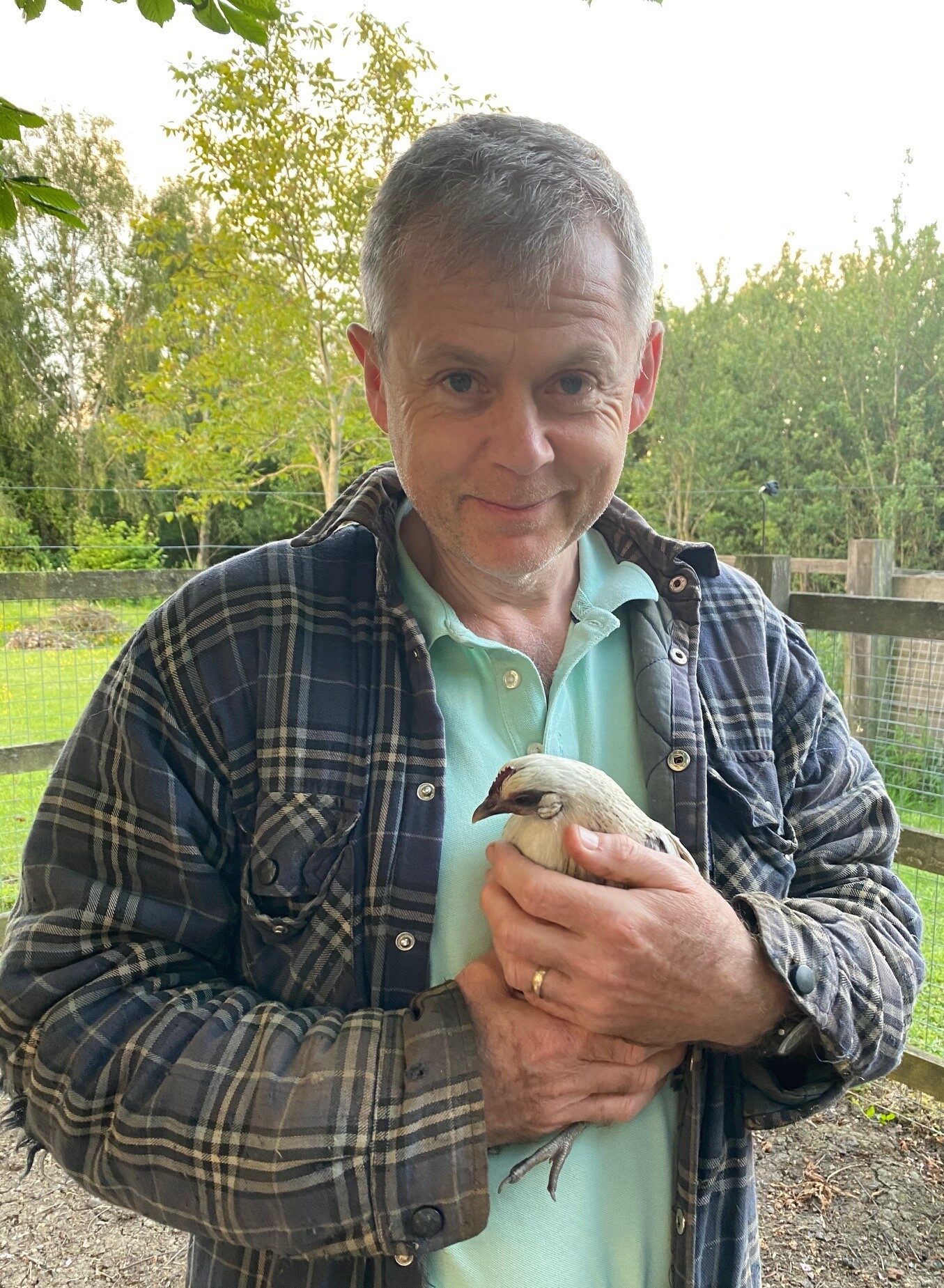 We kept her in the garage for about a month, applying the magic cream twice a day. Slowly, the hole in her back healed and feathers started to grow back on what had been a sizeable bald patch – relatively speaking, as for those of you unfamiliar with the dimensions of a bantam hen, I should tell you that they are tiny. They’re about a quarter to a third the size of a ‘standard’ chicken, if, indeed, there is such a thing – somewhere between the size of a quail and a pigeon, or half a dozen sparrows sellotaped together (don’t try this at home, children!) – and about a hundredth of a bantamweight’s boxer’s weight, which just goes to show that the boxing world knows less about bantams than I do about the finer points of boxing.

But I digress. At this point she let us know, in no uncertain terms, that she felt the time had come for her to leave the confines of the garage-based hospital ward and return to the great outdoors. So, for the next few days, we took her temporary house into the garden each day so she could get some natural sunlight and peck around a bit on the lawn, until we finally decided she was well enough to reacquaint herself with the other chucks. The next question was, what was she going to live in? And how were we going to ensure that as soon as she was well enough she wasn’t going to fly over the fence into next door’s garden again, with the associated risk of a repeat performance?

After much head-scratching, I re-purposed the previously re-purposed cold frame, by extending it upwards and installing a door on the now ground floor. I also hastily built an enclosed run, to ensure she could come outside during the day without the others being able to bully her and without her being able to do a runner – or, more correctly, a combination of a flyer, a runner and a flyer, over the fence surrounding the chicken area, across our garden and over the hedge between us and next door’s potentially murderous hound.

Over the next few weeks, we gradually tried to integrate her with the ‘gang of four’ with some, though far from total, success. They didn’t exactly welcome her back, it has to be said, but at least now, after several weeks of general indifference, by and large they tolerate her, as long as she remains on the fringes of their little clique. Except at meal times, when the pecking order is well and truly reinforced.

Then events took a slightly unexpected turn. Some friends of ours, who live locally, asked us if we’d take on a companionless chicken. They used to have a small flock, which, over the last few months, had been whittled down by a combination of old age and the local neighbourhood foxes and a recent loss had left them with a single, aged survivor. They  asked us if we’d take her in, so she didn’t have to spend her remaining days on her own. Being something of a soft touch, though a teeny bit concerned that we seem to be becoming unintentional carers (or, perhaps, a dumping ground) for homeless or distressed chickens, we agreed and a few days later ‘Wiggy’ arrived, along with her house. 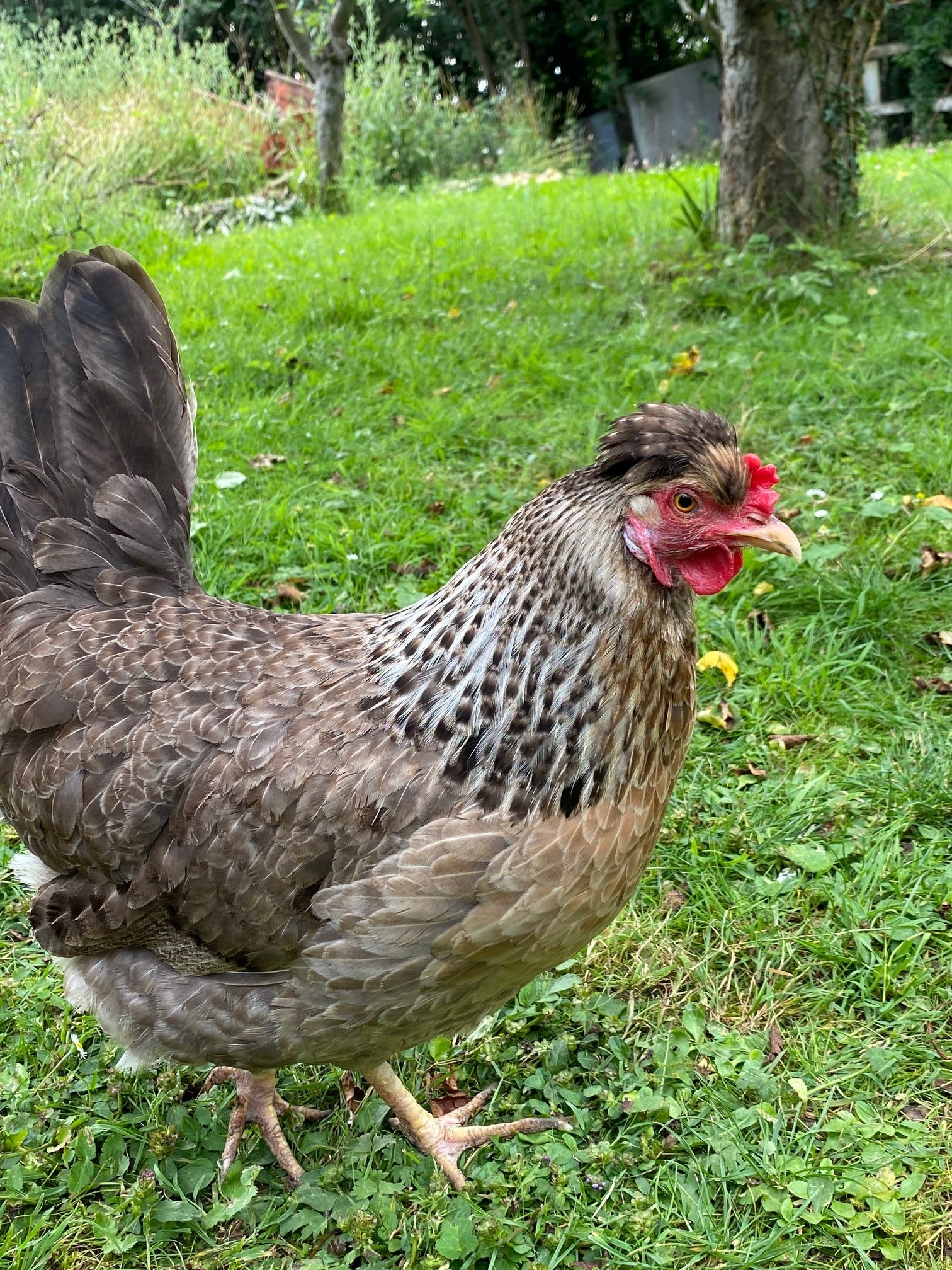 Apparently she’s a Cotswold Legbar, a breed that has a strange lump of feathers on top of its head that our friends thought resemble the proverbial rug or ‘syrup’*, hence the name (apologies to any wig-wearers out there for any unintended offence). We’ve never named our chucks and we certainly don’t see them as pets – that way, we find it slightly less traumatic when they get torn to pieces by a fox, as they occasionally do, despite our best efforts to keep the two parties apart. But this one has a name. I just hope the others don’t get any ideas, or resent the fact that we refer to them as the brown ones, the grey ones and the small one.

Names aside, it’s been really interesting watching them sort out the pecking order since their new guest arrived. The bantam had previously been firmly at the bottom of the pile but the arrival of Wiggy gave her an opportunity to drag her social standing up a notch. Despite the fact that Wiggy is at least four times her size, when the corn comes out the bantam struts and pecks and generally shows her who’s boss. It’s a bit like watching my vertically challenged friend squaring up to someone twice his size (see ‘Horses for courses‘).

Unlikely as it may seem, there are actually a couple of business continuity-related considerations prompted by this little story, to wit : 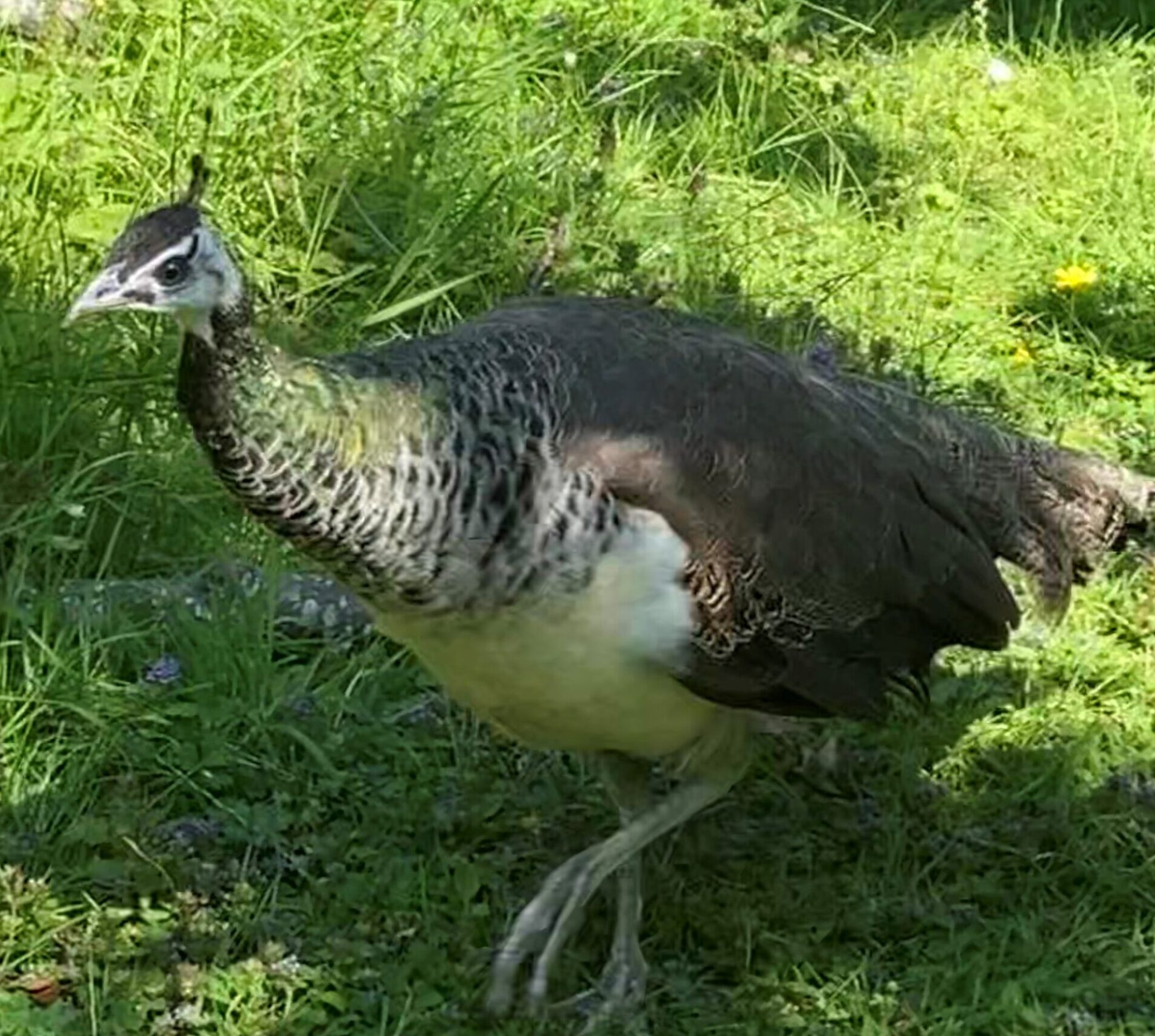 I was hoping to close by reporting that things had finally calmed down on the domestic fowl front and were back to normal. However, it seems our reputation as a care home home for local destitute poultry is getting around, as last week we were visited by another stray bird.

Strange as this may sound – I’m struggling to get my head around it myself, to be honest – a peahen appeared in our garden and seems to have taken up residence. We have no idea where she came from or what to do with her, so I’ll just have to let you know how things pan out in a future blog. Watch this space.

* For those unfamiliar with Cockney rhyming slang, syrup = syrup of figs = wig.

Related articles : ‘A bag of spanners‘; ‘Ready for anything?‘; ‘ One size fits all‘; ‘A leading role‘; ‘The right stuff‘