The second not-going-to-plan bit started with a knock on the door on Saturday afternoon, as we were preparing to continue our project activities. I answered the door to my next-door neighbour, who asked if we had bantams among our poultry flock. “Sort of…” I started to reply, about to add that there was one but strictly speaking it wasn’t ours but, before I could get the words out, he followed up by telling me that his dog had got hold of a bird in his garden. He’d originally thought it was a pigeon but, on further investigation, discovered that it was a bantam hen and thought it might be ours. And, whoever it belonged to, it wasn’t very well, on account of the large hole it now had in its back as a result of his dog’s exuberance. I’m paraphrasing here but I’m sure you get the gist.

It was something of a déjà vu moment, as a similar thing happened some years ago when, not long into our poultry-rearing exploits, a previous chicken somehow got into the same neighbour’s garden and was attacked by one of their previous dogs. There were no outward signs of injury but, whilst apparently still alive, it wasn’t  moving and was clearly on its last legs. Mrs Oz and I decided that we should put it out if it’s misery. However, this was well before our ‘table birds’ experience (see ‘Chicken food’) and neither of us had ever dispatched a chicken, or any other creature for that matter, so there was much discussion about who would do the deed and how. I drew the short straw and decided that the quickest and easiest method would be to chop its head off with a spade, revolting as that sounds. Returning from the tool shed with said implement, we were somewhat taken aback to find that the stricken chicken was no longer where we’d left her. Surely a fox couldn’t have snuck in and taken her while our backs were turned, we thought. But no, she was up on her feet and strutting around with the others as if nothing had happened. Which only goes to show that important decisions shouldn’t be made in haste.

But I digress. Before I go much further, I feel I should explain the bit about the bantam “sort of” belonging to us. 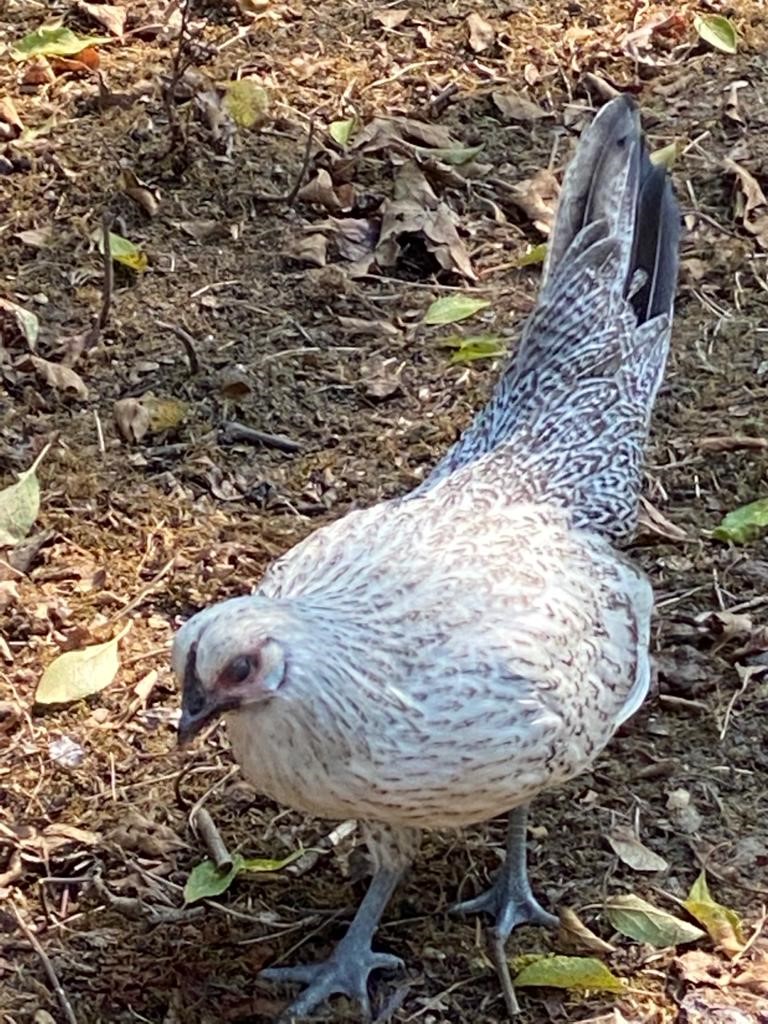 A few months ago we had a visitor. We heard an unfamiliar squawking in the garden, investigated the source and saw a strange looking bird, a bit like a pigeon with a fancy tail, strutting around. An internet search suggested it was a bantam hen. It had clearly escaped from somewhere, so we asked around but none of our neighbours could throw any light on where it had come from. In any case, we couldn’t catch it, as it ran off every time we approached it.

The bantam was a regular visitor over the next few weeks and, at some point, she discovered our chickens, whose ‘compound’ (see ‘Murder most fowl’) is at the top end of our garden. She eventually worked out that she could fly over the fence and join them, although it took her several months to work out that she could just walk through the gate in the morning when we opened it.

Every morning she would fly in, spend the day with our chickens – albeit at a distance, as she wasn’t overly sociable and the resident hens didn’t exactly welcome her with open arms (or, rather, wings, as, if you’re at all familiar with chicken anatomy you’ll know, they don’t really have arms) – then fly out again as evening approached and go home, wherever home was. A bit of a freeloader, really. Not unlike number two son in many ways – as he suggested, I should point out. I’d never say such a thing. As time went by, the bantam became slightly braver and the chucks became more accepting of her. Not to the extent that she was allowed in their coop, however, and she still went ‘home’ every evening.

So, back to our conversation with our neighbour. He passed me a shopping bag containing the injured bird and left me wondering what on earth to do with her. I took her inside and checked her over. She was alive but had a nasty gash on her back. It didn’t look good but I couldn’t tell quite how bad it was, so I ummed  and ahed about whether it was best to dispatch her or try to patch her up. A quick web search suggested that dog bites are bad news for poultry as, even if the damage itself wasn’t terminal, subsequent infection often was. Another web search suggested that “surviving chickens are often traumatised and may show signs of shock and emotional distress for several days to months following an attack“. So, if she did survive, it seemed I’d potentially need to find a counselling service that specialises in poultry-based trauma.

In the end I phoned our vet who said they’d have a look at her before deciding whether or not to send her to the great chicken coop in the sky. Post-examination, he told me that, whilst the bite had resulted in fairly sizeable hole that couldn’t be stitched, there seemed to be no internal damage and she seemed relatively comfortable, notwithstanding the aforementioned hole. He gave her an antibiotic injection and gave me some cream to apply to the wound twice a day. Then the receptionist gave me a bill for £47.

If you’re a regular reader, it won’t surprise you to learn that a few elements of this story suggested some business continuity-related considerations to me.

Number one : Preparation is key. For any project of any significance we need to get the groundwork right and implementing a business continuity capability is no different in that respect. Leaping straight into plan writing without any analysis or strategy is a recipe for a plan full of holes. Unfortunately, it’s something that far too many organisations do.

Number two : Those affected by a major incident are often affected by stress or, in extreme cases, trauma. I’ve said it before but I’ll say it again, most business continuity programmes are woefully inadequate when it comes to considering, let alone planning and preparing for, this important issue. I do think things are finally starting to improve in this regard, but for many organisations there’s still a long way to go.

Number three : Sometimes, it’s a good idea to seek expert advice when faced with something we’re not personally expert in. This applies both during our business continuity planning efforts and when responding to and making critical decisions relating to a crisis or major incident.

Having waffled on for the best part of 1,300 words, it’s time to conclude this sorry tale, at least for the time being. “But did she survive?”, I hear you ask. I’ll let you know in the next episode, so watch this space…

Related articles : ‘How do you eat an elephant?‘; ‘A personnel challenge?’; ‘Keeping one’s own counsel‘; ‘A little knowledge can be dangerous‘