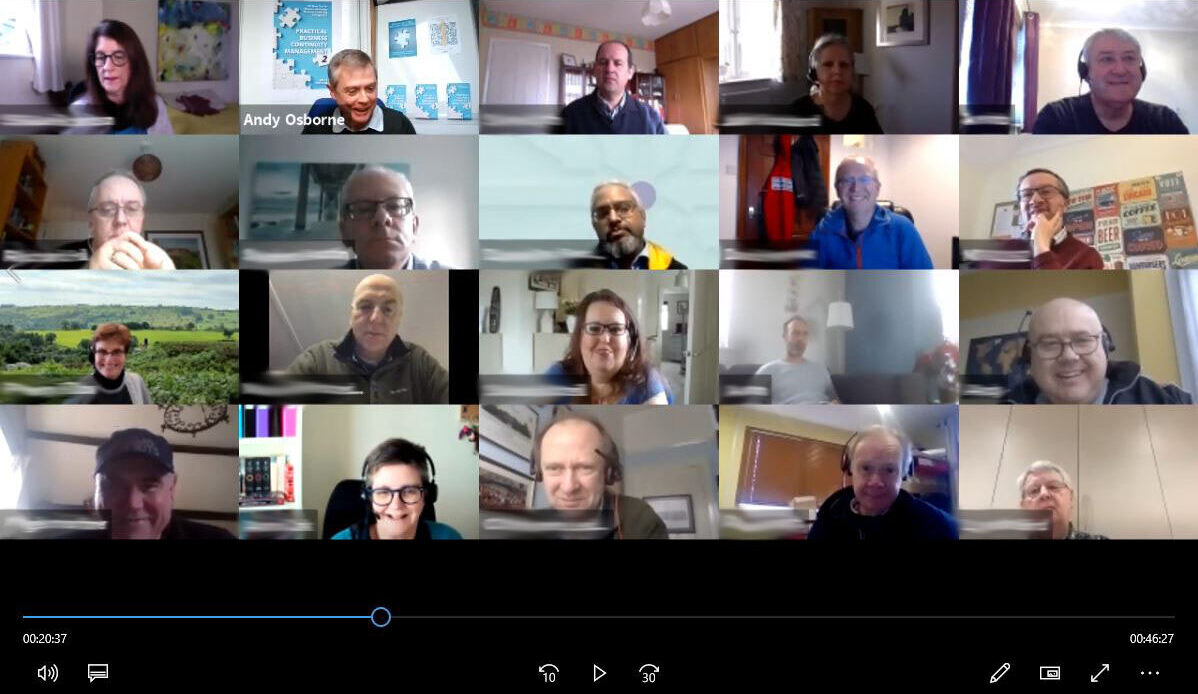 As you may know (I think I might have mentioned it a couple of times!), the beginning of February saw the official launch of my new book Practical Business Continuity Management 2, marked by an online get-together of around thirty of my business continuity pals.

If you were there I hope you enjoyed it as much as I did. If you missed it and want to watch the recording and pretend you’re there, click here (if you do, I suggest fast-forwarding to 2 minutes 50 seconds, where it really starts, as before that it’s really just people joining, which is about as exciting as the start of most online meetings).

It was a shame we couldn’t do the launch face-to-face but, on the plus side, it enabled people who otherwise wouldn’t have been able to make it to attend – in fact, we had attendees from half a dozen countries in three continents. Better still, it meant I didn’t have to fork out on a venue, some cheap fizz and a packet of Twiglets, so what’s not to like about online book launches?

Prior to the event, I gave some thought to how to spruce up the backdrop behind my desk, in my home office, where I planned to sit for the session. A bare wall and the door to what Mrs Oz and I grandly refer to as the ‘server room’ aren’t particularly visually stimulating, so a bit of titivating was definitely in order. After protracted discussions with the marketing department we finally decided on a poster of the book’s cover on the wall and a nice tall plant in front of the door.

The only problem was that we didn’t have any indoor plants, other than a very small cactus belonging to number two son, which didn’t really have the visual impact I was looking for. Whilst Mrs Oz and I are reasonably accomplished outdoor gardeners, we’ve never really been any good with houseplants. We usually end up killing them through neglect, which, I suppose is a reasonable definition of not very good. I’m pleased to report that we’ve been slightly better as parents and animal owners, and I can confidently say that, ineptitude aside, the demise of two colonies of bees and the violent deaths of several chickens and ducks at the hands (or, more correctly, teeth) of the neighbourhood foxes (see ‘Murder most fowl‘) over the years weren’t actually due to neglect.

So, a couple of weeks before the event, I ordered a suitable plant online. A lovely looking weeping fig (Ficus benjamina for those with an interest in botanical names). I decided on the 70 centimetre tall version. I’d have liked a taller one but, on the grounds that it was really only needed for one performance and was probably going to be spending its last few months (if it was lucky) on the botanical equivalent of death row, I decided that the exponential additional cost for the one metre tall version wasn’t justifiable and the same effect could be achieved by standing it on something. Trust me on this, I know about standing on things to make one look taller for the camera! Delivery was quoted as “three to five working days”, which was plenty of time, so I happily clicked the ‘buy now’ button.

The day before the launch, when preparing to mount my larger-than-life book cover poster on the wall behind my desk, I realised that I was out of double-sided sticky tape. No problem, though, as a well-known online retailer could deliver by 1pm the following day as long as I ordered it within the next couple of hours. So I did, within the next couple of minutes, in fact.

Come the morning of the event, there was still no sign of the plant, despite it now being 10 working days since I’d ordered it. And a text from the other retailer told me that the expected delivery time for my sticky tape wasn’t 1pm after all, but 2:15 – fifteen minutes after the start of the book launch. So plan B was hastily cobbled together, involving a grubby old lump of  blu-tack and my portable whiteboard, which was rapidly transformed into an impromptu bookshelf and display, in place of the carefully thought-out  botanical one. We did the launch and, on the grounds that nothing fell down or off during it, I think it’s reasonable to assume that we got away with it. 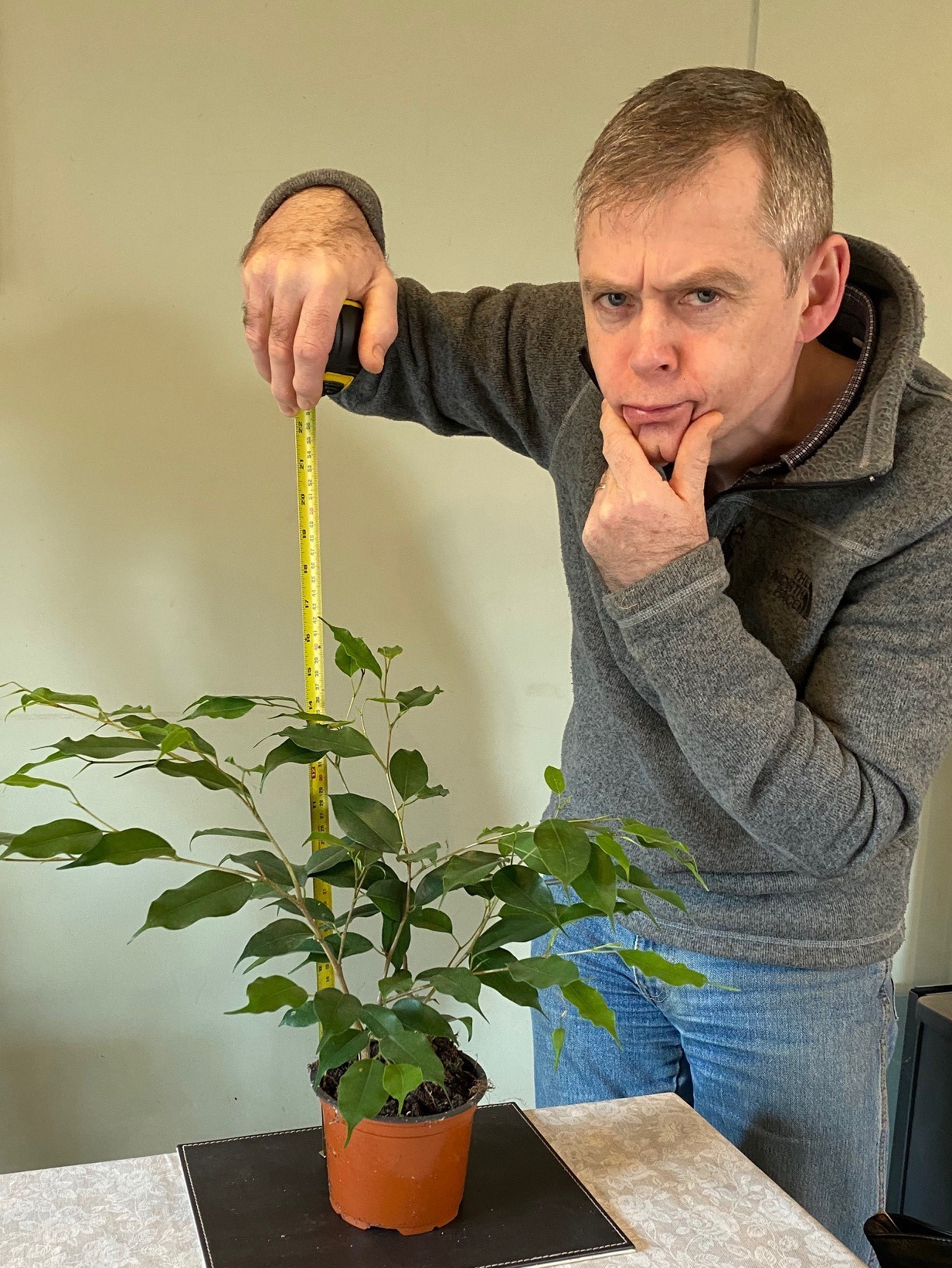 The double-sided tape actually arrived just after four o’clock, as I was enjoying a well-earned post-event refreshment. The plant arrived the following day. As it turned out, even if it had arrived on time, it wouldn’t have been any use to me, as it was quite clearly not the advertised height. In fact, at 31 centimetres, it wasn’t even close.

Now, I’m  no stranger to a small amount of exaggeration in the height department, being somewhat vertically challenged myself. I confess that I have a tendency to round up my height a teeny bit, as five foot seven (approximately 170cm in new money) sounds so much taller than than five foot six and a half (169cm) – but I’ve never claimed to be 125% taller than I actually am. I’m fairly confident that I generally get away with my five foot seven claim (at least it’s never been openly queried), but I’m pretty sure people would notice if I told them I was twelve foot six!

I contacted the plant supplier, as I thought they’d prefer that to me simply posting a negative review on their website. They offered me a partial refund (although, it has to be said, nowhere near the percentage difference vis-à-vis the plant’s height versus its description), which at least means I haven’t wasted quite so much money on a superfluous and almost certainly soon-to-be-dead plant, and they blamed the issue on their supplier, which, I have to say, didn’t impress me one bit.

Because of the way my mind works, several aspects of my virtual book launch experience prompted the following business continuity-related thoughts :

Thought number one : The ability to easily reach a global audience these days is incredibly powerful and can be hugely advantageous. However, from a crisis management point of view, it also has some potential downsides, one being that news of and/or opinions on our troubles can spread a lot faster and wider than ever before. Which means our crisis communication planning needs to include due consideration of how we might deal with this important issue.

Thought number two : Online meetings aren’t the same as physically being together in the same room. They have some advantages and disadvantages, and most of us have had to adapt and learn how to deliver meetings, workshops, courses, exercises, etc in a slightly different way in recent months. Online meetings are almost certainly here to stay, and crisis management via Zoom, Teams or whatever will, in all probability, remain the norm. We therefore need to think carefully about how we address the disadvantages and maximise the advantages. This may involve changes to the way meetings are run, the use of shared electronic whiteboards and event/decision logs and more regular ‘time-outs’ to review them, amongst other things.

Thought number three : Setting expectations is really quite important, to ensure people know what they’re actually going to get, rather than what they assume they’ll get. It’s usually better to under-promise and over-deliver, rather than the other way around, particularly when it comes to achievable recovery times and recovery points. And finding out about a serious shortfall against expectations at the point of delivery really isn’t ideal.

Thought number four : When your crisis is caused by a supplier’s screw-up, it’s generally poor form to publicly blame them. Most of your customers and other key stakeholders see your name ‘on the door’, not your supplier’s, and see it as your foul-up. Unfortunately, the buck stops with you and unsubtle attempts at passing it aren’t generally considered to be a sound or effective crisis communication strategy.

As I write this blog, some four weeks after the book launch, the superfluous little plant is alive and well, which is quite an achievement, given our past form. I even remembered to water it last night, so hopefully it will survive longer than its predecessors. Who knows, it might even live long enough and grow tall enough to form the backdrop for my next book launch!

Related articles : ‘Breaking with tradition‘; ‘Fight, flight or film‘; ‘What’s the story?‘; ‘Log it or lose it‘; ‘It’s about time‘