The last few weeks have been quite busy – and, at times, a teeny bit stressful. I’ve prepared and facilitated four crisis management  and business recovery exercises (two of which included actors and journalists and mock TV and radio news reports and one of which had participants in four different time zones), run a couple of incident management and business continuity team briefing workshops and attended several client meetings in various far-flung locations (during one of which someone, who, it should be noted, isn’t a business continuity consultant or practitioner, stated that they were – and I quote – “excited” by the results of a business impact analysis, which, I have to say, is a first for me!). 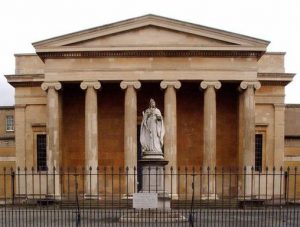 If that wasn’t enough, all of this was rounded off with an afternoon in my local County Court.

The court thing was, without doubt, the most stressful of all of the activities. I was there to contest what I considered to be an utterly unreasonable parking fine from what some might describe as a cowboy parking company and their shyster solicitors. And because, whatever else I may be, I consider myself to be a man of principle, and there was, without doubt, a principle at stake here.

Some people might suggest that I can be a teeny bit stubborn at times (Mrs Oz has been known, on occasion, to use the word ‘stroppy’, which I feel is a tad unfair, but we’re all entitled to our opinions – after all, you get to hear mine often enough!) and, in all fairness, that may be true, particularly when my hackles are up. And on this particular occasion my hackles were standing to attention and saluting the flag of righteous indignation.

I’ll spare you the detail and be as brief as I can, but it’s important that you understand why I felt I had to make a stand.

A little over eighteen months ago, Mrs Oz parked in a hotel car park to visit a hostelry that we’d used many times over a period of over two years. A couple of weeks later, as the owner of the vehicle in question, I received a £100 penalty charge notice from the newly appointed ‘parking management company’. I use this term loosely – others might describe them as scammers or racketeers or extortionists, but far be it from me to use that kind of language. Anyway, there was a distinct lack of visible signage* informing users of the new regimen, either in the car park or the bar itself – as evidenced by the fact that around twenty other acquaintances who visited said establishment that evening and/or the following week, some of whom also received similar penalty charge notices, didn’t see any either.

We spoke to the owners of the establishment, who told us to ignore the notice as they were waiving them for all genuine customers up to a certain date. So we ignored it. Then we received another one, which the owners advised us to ignore too. Which we did.

There ensued, over the following months, a veritable torrent of increasingly intimidating correspondence from the parking company, a debt collection agency and a ‘firm of solicitors’ (make what you will of the punctuation, but you might want to refer to the footnote below), including threats of legal action, all of which contributed to my vertical hackles.

At one point, Mrs Oz suggested that we might just pay it, as we could well do without the hassle, which was perfectly true. But a) that’s clearly the way this particular company make their ill-gotten gains and b) I’m afraid that rolling over and accepting injustice just isn’t in my nature and I’m one of those people who believes you should stand up to bullies. Obviously, as a risk management professional, these days I tend to look at the likelihood and impact of getting my head kicked in or my kneecaps broken as a result, and I did briefly consider the potential downsides in this case. But then Mr Stubborn put in an appearance and I convinced Mrs Oz that we should fight these people (I’ve heard some people describe them as scumbags, and worse, but I’m far too polite to resort to that kind of terminology).

To cut a long and sorry story short, after months and months of hassle and general unpleasantness, the case finally came to court. 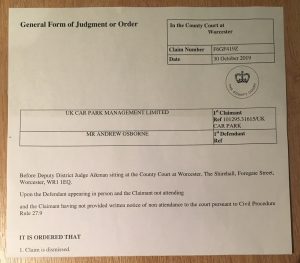 I’d prepared my defence meticulously (again, I’ll spare you the details, although I’m more than happy to provide lots more details for anyone who’s interested or who may be in a similar situation and wants some moral support), helped by a couple of visits to a solicitor I’m fortunate enough to know. I’m delighted to report that the judge ruled in our favour and dismissed the case. I may have misinterpreted his comments, but I’d be tempted to use the words ‘scathing’ and ‘contemptuous’ to describe his attitude to the aforementioned ‘cowboys’ and ‘shysters’ (as others have described them, though I wouldn’t stoop so low, obviously). 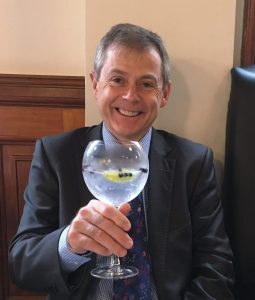 As you can probably imagine, I’m absolutely chuffed that I got the result that I wanted and felt I deserved, and I feel that my stubbornness (or stroppiness – you choose) has been entirely vindicated, despite the grief that it’s caused over the past eighteen months or so. It’s an understatement to say that Mrs Oz and I were relieved at the outcome, but we attended a therapy session shortly after the hearing, which helped enormously, as you can see.

Aside from me railing against injustice and what some might consider to be sharp practice, what has all this got to do with business continuity management? Well, it highlights a few things that I think are worthy of consideration…

Aside from the satisfaction of being able to metaphorically stick two fingers up to the parking company in question and their dodgy solicitors**, I’m considering where to go from here. Don’t tell Mrs Oz, but I’m seriously thinking about starting an online petition in an attempt to curtail the sharp practices employed by the less-reputable and less-scrupulous ‘parking management companies’ that make their money by intimidating people. I just need to get my head around what I’m asking people to petition against, which requires me to research the law and associated regulations in a bit more detail. I’ll let you know as and when I do that as I may well ask for your support if you feel you’re able to give it.

In the meantime, do let me know if you have any similar stories or advice as to how I might progress this, as I really feel quite strongly about it, as you may have noticed!

…and relax. After all, whilst it’s been a bit of a stressful period, I did find someone (a normal business person, mind you, not one of those strange business continuity types) who was excited by a business impact analysis. Which, to be fair, is probably far less likely than me winning my court case!

Related articles : ‘Questions, questions‘; ‘PPPPPPP‘; ‘One at a time‘

* A quick search of the relevant online forums suggests that this is hardly an unknown phenomenon – I can’t think why.

** Dodgy because their owners just happen to also own one of the parking industry’s trade associations, which rather conveniently sets its own code of conduct, even more conveniently gives them access to the DVLA’s vehicle owners‘ database and oversees an ‘independent’ appeals process, which, quite frankly, is a joke, and is about as independent as my right leg is from my left one. For more information have a look at  https://www.parkingcowboys.co.uk/gladstones-solicitors/ and http://parking-prankster.blogspot.com/search?q=gladstones – they make interesting reading.