Barney has a new friend. When I say friend, it’s more of an enforced acquaintance. A bit like that weird cousin or creepy family friend who’s clearly a bit dodgy but we’ve had to tolerate and pretend to like so as not to offend our parents. You know the one. 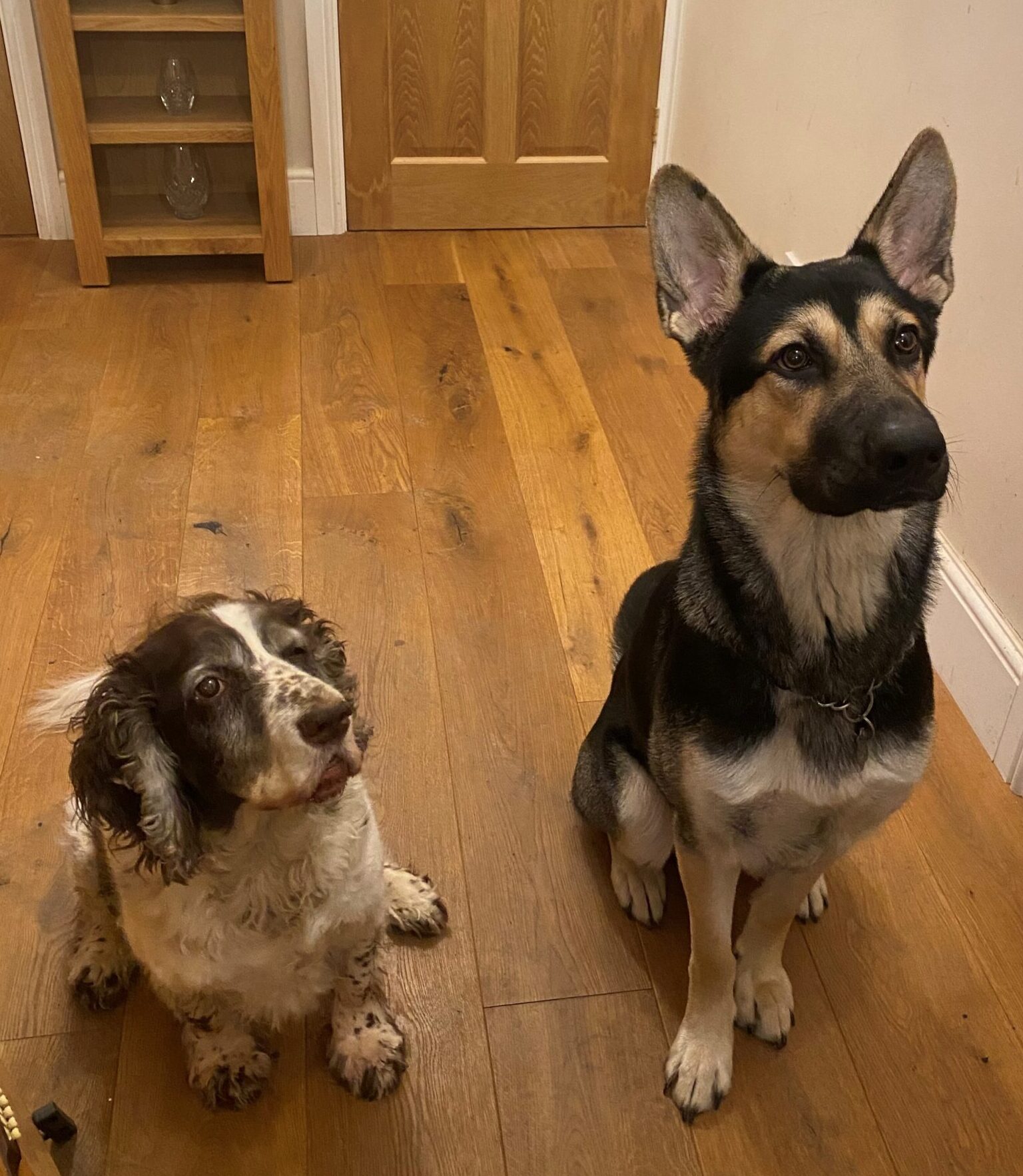 The acquaintance in question is Zeus, number one son’s dog, a German Shepherd puppy. At least that’s what he’s alleged to be – it’s  what it says on his pedigree certificate at any rate, although all the signs indicate that there’s a fair amount of kangaroo and a bit of crocodile or shark somewhere in his family tree. He’s only eleven months old but he’s already a big lad, towering over Barney, and is a tad boisterous, to put it mildly.

Barney, who’s now eleven years old – which, depending on the dog-to-human-years formula you subscribe to, is somewhere between sixty and seventy-seven of our years – takes life at a fairly sedate pace these days, is partial to a bit of peace and quiet and, like many of us approaching our more mature years, has been known to get a teeny bit grumpy when it’s disturbed. His favourite thing nowadays, besides food of any kind – he is, after all, a spaniel – is sleeping. So he doesn’t exactly appreciate it when  his peace  is shattered by a  huge, bouncy, overly-enthusiastic, slightly uncoordinated, whirling dervish invading his personal space. Which Zeus, tact and diplomacy not being his strongest suits, specialises in.

Zeus comes to visit us several times a week. A fairly standard encounter involves Zeus bounding into our house and, after a robust and enthusiastic hello to me and Mrs Oz, smothering Barney with massively over-the-top affection, involving huge amounts of personal space invasion and face-licking. This is usually met with a firm rebuke in the form of  much growling, barking, baring of teeth and an altogether pompous display of mock ferocity, which is all bluff and bluster as Barney doesn’t actually have an aggressive bone in his body. Thus far, it’s been reasonably effective and generally results in Zeus backing off, at least for a few moments until the process is repeated, usually multiple times throughout the visit. What Barney clearly hasn’t twigged, however, is that it’s going to come back in spades once Zeus realises that he’s bigger, stronger, faster and infinitely more capable of actually carrying out such an implied threat than a grumpy old, well-past-his-prime Field Spaniel, a breed not renowned for their street-fighting prowess.

Usually, Zeus’s visits are relatively short-lived and things quieten down after a few hours when he goes home. Over the Christmas period, however, he came for an overnighter, along with number one son and his girlfriend. We were a bit nervous about how things would turn out, as a few weeks previously, in an  unguarded moment, we’d agreed to Barney and Zeus’s first sleepover. As most parents who’ve been daft enough to allow their children to invite friends for a sleepover will know, the sleep part of sleepover is a misnomer, as there’s often precious little sleep involved, either for the sleepover-ers or the unfortunate parents, and everyone’s exceedingly grumpy next morning. Why we thought a doggie sleepover would be any different beats me but, in our defence, it had been a good few years since our last sleepover experience, and I suppose the memory had faded somewhat. Suffice to say that this one played out in a remarkably similar way, albeit with over-excited dogs, rather than hyped up children.

In terms of the (admittedly tenuous) relevance to business continuity…

Firstly, things aren’t always as they seem. Over the years I’ve seen many, many business continuity strategies and plans that fall into this category. They may look OK to the uninitiated, or to those who don’t have the time or inclination to give them more than the most cursory of glances, but a rootle around (or a health check, to give it it’s proper name) often reveals elements of bluff and bluster. It can be useful to ask someone who knows what to look for to give them the once-over, provide an unbiased view on their potential effectiveness and identify any gaps in capability. But I would say that, wouldn’t I?!

Secondly, some people like new things and can be quite gung-ho in expressing their opinions, whereas others are resistant to change or new approaches. On the one hand “because we’ve always done it that way” doesn’t necessarily mean we should carry on doing it that way, as sometimes new or different ways of doing things are improvements on the old ways. On the other hand, different isn’t always best. Therefore, whatever approaches we choose, we should ensure we think things through, and not leap blindly into something that doesn’t fit our particular situation. Caveat actor or caveat emptor, to put it another way (or two ways, if you want to split hairs!).

Thirdly, perception is hugely important – you’ve probably heard the saying “perception is reality”. So, in the unfortunate event of having to manage a crisis, whether or not we feel like we’re in total control of the situation, it’s crucial to at least give our stakeholders the impression that we are. Which means that perception management needs to be a significant element of our crisis management planning, a large part of which is crisis communications preparedness.

Thankfully, notwithstanding Zeus’s bouncy in-your-facedness and Barney’s frequent posturing and pseudo-aggressive defence of his personal space, toys, meals and Christmas doggie treats, our fears for a sleepless Christmas sleepover proved to be unfounded and everything went off surprisingly well. Although, to be fair, the soporific effects of our over-indulgence in the food and drink departments may have played their part!

If I haven’t done so already, I’d like to take this opportunity to wish you a happy, healthy, prosperous and peaceful new year.
Andy (Oz)

Other articles : ‘Perfuming the pig!‘; ‘The devil’s in the detail’; ‘A matter of perception‘.