The Osbornes recently suffered a tragedy in our menagerie (which is almost good enough to be the title of this blog, but not quite).

Regular readers will know that I’m a bit of a yokel and that I live in semi-rural idyll with a variety of strange creatures – of the furry, feathered and buzzing variety, as well as two teenagers.

But our bucolic bliss has been shattered by the loss of two members of said mengerie to the evil Mr Fox, who evidently managed to find a way into the high security wing of the garden where the chickens and ducks live – or, in the case of the ducks, lived.

Until Mr Fox’s visit we had a pair of Indian Runner ducks, which admitedly were a complete waste of space in terms of egg production (the books say they lay pretty much 365 days a year but if ours managed a dozen eggs last year I’d be surprised) but were highly entertaining. If you’re not familiar with Indian Runners, they stand very upright and, as the name suggests, run everywhere. Or at least they did. Sadly, not quickly enough, it would seem.

Now, we’re well aware that one of the risks one faces when one keeps any kind of poultry is from foxes. Foxes like ducks and chickens too, although for their calorific rather than their entertainment value. So one has to be alert to this particular threat and take appropriate precautions. Having lost birds to foxes in the past, we decided to create a secure area for them.

On two sides of this area is a five foot high fence, fronted with steel mesh and with electric wires top and bottom. On the third side is a brick wall of a similar height and on the fourth a stock-wire fence with a really, really spiky, tangly hedge in front of it. The hedge contains hawthorn, wild roses and pyracantha – it’s vicious and regularly tears chunks out of me when I’m trimming it. All that’s missing is a couple of searchlight towers and some armed guards, as our neighbours hilariously point out to us on more than the odd occasion. The point is that there was no way that a fox could get through it.

Except that over a period of time, while our backs were turned, wily old Mr Fox somehow managed to create a way through the seemingly impregnable hedge and eventually put his cunning plan into action. He must have torn himself to pieces actually getting through but, give him credit, he did it. And once he was in poor old Mr and Mrs Duck didn’t stand a chance. Next morning, the only evidence was a pile of feathers and part of wing. Yuck!

All of this is an object lesson in risk management. As I point out *** warning, blatant and shameless plug approaching *** in my book ‘Risk Management Simplified‘ the risk management process involves five simple steps, as illustrated below. 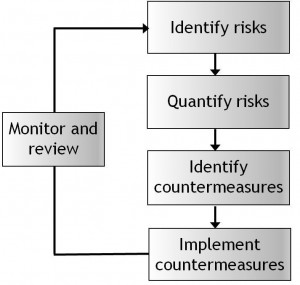 As I’m a consummate risk management professional I obviously followed the process to the letter in my poultry-based risk management efforts. Except that I didn’t – not quite anyway.

What I neglected to do was to carry out the ongoing, regular monitoring and reviewing, to ensure that the countermeasures that I’d put in place continued to provide the level of risk mitigation that they did when I originally implemented them. Which is an absolutely key point that is so often overlooked.

I’ve now addressed the gap in my risk management strategy, by installing some electric fencing along the border in question. And unless Mr Fox either can either pole-vault or teams up with a local kangaroo, of which there aren’t many in Evesham to my knowledge, he’s not going to get in again. I think I might just keep an eye on things though!