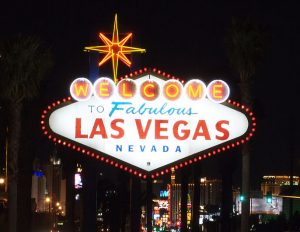 I’ve never been to Las Vegas. I’m going there soon and I’m really quite excited at the prospect. Not because I’m a gambler, I hasten to add. I have been known to buy the occasional lottery ticket and enter the office Grand National sweepstake but that’s about the extent of my gambling habit. I am, after all, a consummate risk management professional and it’s my professional opinion that gambling is a mug’s game.

This is borne out by the fact that I’ve never won more than a tenner on the lottery and I can’t remember any horse I’ve ever picked in the sweepstake actually finishing the race, let alone winning. I like to think of myself as risk aware rather than risk averse, though. And you never know, do you? The odds of winning the big one on the lottery might be something like forty-five million to one but, on the grounds that you have to be in it to win it, I do still buy a ticket now and again. Incidentally, did you know that the odds of being hit by something falling off a ‘plane or being fatally struck by lightning are, apparently, only about ten million to one? Not really worth worrying about then, if you ask me.

But I digress. The reason I’m going to Las Vegas is that some very nice people at IBM very kindly invited me to attend their ‘Interconnect’ conference there. When I asked why they’d invited me they told me it was because the conference in general, and the resiliency stream in particular, includes a ‘social influencer program’ and, it seems, they consider me to be a ‘social influencer’ – whatever that means. I think it means that I write a few blogs and post the odd tweet, but ‘social influencer’ has a certain ring to it so I’m more than happy to be described as one. I’m just relieved that they didn’t try to tell me I’m a ‘thought leader’ as that’s a phrase I’m allergic to, along with the words ‘holistic’, ‘paradigm’ and ‘black swan’. In any case, the world already has more than enough thought leaders in it. From what I can tell, it seems all you need to do to be a thought leader is to say you’re one in your LinkedIn profile or on your website or, better still, get one of your mates to say it for you. Unlike us ‘social influencers’, obviously.

To be honest, I was a bit worried that they’d got me confused with someone else, so I did ask them whether they’d actually read any of my blogs, pointing out that they’re not exactly scholarly articles. But they said they had, and that they liked them because they’re a bit different. I didn’t think it prudent at that stage to ask how much they’d been influenced by them.

Anyway, the deal is that I attend the presentations that interest me, talk to a few people (perhaps some fellow ‘influencers’, or maybe even the odd thought leader, who knows?), post a few tweets, maybe write a blog or two and take part in some filmed discussions that might then (and here’s the scary bit) find their way onto YouTube, Facebook, Twitter, etc. I know it sounds like a really tough gig but, on the grounds that now I’m a social influencer I clearly have a responsibility to my army of influencees, I’m willing to give it a go. And anyway, as I get to stay in a swanky hotel in Las Vegas, I figured I’d be daft to turn down the opportunity. So watch this space and prepare to be influenced.

I suppose I should at least attempt a link to business continuity here, rather than just bragging about my newly-discovered social influencer status and my impending trip. So here goes…

Firstly, risk perception is a curious thing. Human nature is such that our judgment is generally overly optimistic, so we tend to downplay negative risk but over-estimate the likelihood of success. It seems strange that people who are willing to accept odds of tens-of-millions to one of winning the lottery often don’t believe that a business continuity incident will ever affect them, despite the fact that the odds are almost certainly far shorter. But that’s what we’re up against.

Secondly, social media definitely has its place in our business continuity and crisis management planning. The very first blog I wrote, back in 2010, (blimey, does that qualify me as a thought leader, after all?) touched on this theme and asked whether social media might be used for awareness-raising or crisis communications (see ‘Hello world!‘). Seven years on I’d say the answer is a resounding “yes” on both counts. Moreover, I’d contend that we now also need to consider the power of social media in a crisis management context, both as an aid to situational awareness and in terms of its potential to cause, or at least exacerbate, a crisis. The fact that social media crisis management has become something of a subject in its own right, with its own tools, training courses and, of course, thought leaders, would appear to bear this out.

So my travel arrangements are in hand and, assuming my new chums at IBM don’t realise they’ve made a terrible mistake and invited the wrong bloke after all, I’ll soon be jetting off to the city of lights (or sin city, depending on your preference).

I hope to return having influenced someone, at least. And you never know, I might come back several million dollars richer. Or minus my shirt!