It would appear that my body clock has gone a bit haywire.

Yesterday was quite a long day. By the time I got to the ironing episode (see ‘Viva Las Vegas, part 2‘) I’d been up for almost nineteen hours, which probably went some way to explaining my clumsiness with both the iron and my razor (the throat-slitting was an accident, not a cry for help, in case you were worried). And by the time I got to bed after my equally unsuccessful attempt to find my new friends I’d clocked up around twenty-three hours. Although it was only about 10pm, my body thought it was 5am, so it was unsurprising that I was out like a light.

However, I woke up at 3am and couldn’t get back to sleep. I read for a while and eventually dozed off, but I woke again at five and was wide awake, so I got up and did a bit of work before going to the conference.

The morning went fine and I attended some interesting presentations, including an opening session in which various speakers shared, amongst other things, their enthusiasm for the brave new world of cloud and artificial intelligence, followed by an appearance by Will Smith, in which he talked about his career and his various reinventions, along with some sage advice on paying your taxes (apparently it’s quite a good idea!). Other sessions covered data protection in today’s world of overwhelming size, diversity and complexity of information and cyber resilience, both of which gave me lots of food for thought.

It all went swimmingly until mid-afternoon, when I hit the proverbial wall. I was seriously worried that I might fall asleep during the last presentation and even more worried that I might snore if I did so, but I’m pleased to report that I managed to get to the end without embarrassment. I followed this by staggering, zombie-like, to another reception, which, amazingly, I managed to find. 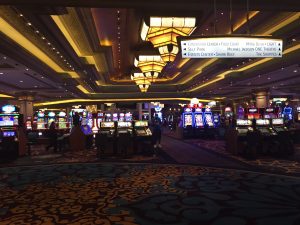 I baled out at about six forty-five, wondering (and worrying) what time I’d wake up if I went to bed at seven. But a stroll through the casino, with the flashing lights of the jackpot machines and an entertaining half-hour watching a couple of people win, but most people lose, on the roulette and blackjack tables (during which I observed, rather than participated) woke me up and I got my second wind.

So, saddo that I am, I fired up my laptop and did some work before popping down to the bar for a nightcap, during which this blog somehow appeared.

And so to the business continuity part…

We all have our favourite war stories about how we heroically worked for 24/36/48/60/72 hours or more (delete as applicable) at a stretch. What we almost always neglect to mention is how effective our decision-making and our ability to think rationally or operate with any degree of normality was by the end.

Whilst many of us like to think we’re super-human, actually we’re not (not even you, dear reader!) and there’s going to come a point at which our effectiveness takes a serious dip.

So we need to think about deputies and alternates, in advance. And, just as importantly, to involve them in the training and awareness sessions and the exercises that the primary members participate in.

I’m hoping that the jet-lag settles down a bit tomorrow, as I’m looking forward to some more interesting-looking sessions. I’ll let you know how things go.