The wood from the trees (or, more accurately, the trees from the wood) 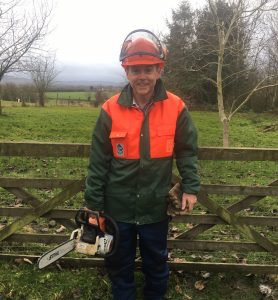 Just before Christmas, my chainsaw (see ‘Boys’ toys’ and ‘No jacket required’) made one of its increasingly infrequent appearances. It doesn’t come out to play very often, but Christmas is one of the rare occasions when it does, as it helps the Oz family obtain our Christmas tree. Before you perform the proverbially erroneous two plus two calculation and picture me sneaking down to the nearest bit of pine forest during the hours of darkness, chainsaw in hand, perhaps I should explain.

We moved to Chez Oz twenty-something years ago. The house we bought needed a bit of work, to put it mildly, but the main attraction, keen gardeners that we are (or at least were, in the days before children and a business came along and deprived us of all but the merest trace of free time) was that it has about an acre of land behind it, in the form of a relatively large garden, behind which is a small field.

When we originally looked at the house, pre-purchase, we noticed that part of the field had some baby Christmas trees growing on it. Apparently they’d been planted by the previous owners to the previous owners (or to put it another way, the owners before the owners before we became the owners). The trees were clearly quite immature so it did seem a bit strange that someone would go to the effort of planting them then move just a year or two later, before they could realise their investment. However, no explanation was offered and we didn’t think too much more about it.

Anyway, despite our better judgement – and the fact that we subsequently realised that neither of us actually liked the house all that much! – for some obscure reason we bought it. Shortly after moving in, I was walking around the field early one morning with the two dogs we had back then (two of the three dead dogs referred to in ‘The skiing bug‘, as it happens) and decided to count the Christmas trees. I’d previously thought in passing that there might even be over a hundred of them and was interested to know exactly how many there were. Whilst the ‘over a hundred’ bit rendered that estimate technically correct, it turned out to be a teeny bit on the low side, as there were 435 of them!

Realising that, even if a) we were massively extravagant, and put a tree in every room for the next fifty-plus Christmases (which would have been economically crippling in terms of the additional lights, baubles and so forth), or b) there were huge advances in medical science over the next thirty or forty years, resulting in our life expectancy doubling or tripling, there were ever-so-slightly too many for our own personal use. So, over the next decade or so we thinned them out, selling a few each year, at very generous mates-rates, it has to be said, to friends, family, workmates and other acquaintances, using the proceeds to fund replacements in the form of somewhat more native species, such as beech, birch, oak, willow, etc.

Twenty-something years after inheriting them, the majority of the remaining Christmas trees are now twenty-something feet* tall, which is a little on the large side for most normal people, so the Christmas tree business is no longer operating. Except for the Oz family tree that is. Each year for the past ten or so, I’ve felled a twenty-something footer, lopped off the top six feet of it so we could fit it in the house and logged the rest as fuel for our wood-burner.

Every year for the past five or so, we’ve wondered whether we’ll be able to find a tree with a suitable top section, but we’ve managed thus far. Occasionally they’ve been a bit sparse or spindly, but it’s amazing what a few lights and baubles will do, and once decorated they’ve always looked perfectly fine. 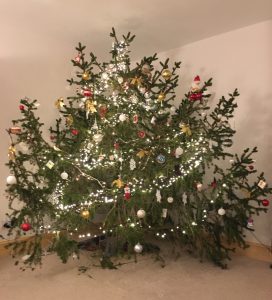 Actually, this year’s tree has surpassed all expectations in terms of possible sparseness or spindliness. In fact, it’s a beast – the widest ever. In my defence, it’s quite difficult to assess those characteristics from ground-level, when surrounded by other twenty-to-thirty footers. Also in my defence, I wasn’t the only one making that assessment. But, it would seem, that doesn’t cut any ice when one’s wife and one are completely rearranging the furniture in one’s lounge to accommodate a serious contender for the 2019 Widest Christmas Tree in Britain award.

A few years ago, I realised that sawing through a twelve-inch** diameter tree trunk by hand, whilst it might be bread and butter for your average muscle-bound lumberjack, was approaching the limit of a slightly less well-muscled business continuity consultant’s physical capability. So I bought a chainsaw.

Having started down the chainsaw route, I had planned to regale you with a small issue with its performance on the day in question. However, given that the word count of this blog is already approaching that of a novella, I’ll save that part of the story for another day and move swiftly on to the business continuity bit…

In the same way that a bit of tinsel can make a sparse Christmas tree look reasonably good, the same is true of many a business continuity plan which, once you strip away the decoration, don’t actually have much substance to them. Whilst a bit of judicious prettying-up can turn an otherwise deficient tree into something that’s fit for purpose, a plan that’s full of gaps (in terms of the strategies and solutions that its success relies upon) can’t.

Sometimes it’s a good idea to check things, rather than estimating or assuming. In the same way that my estimate was spectacularly wrong, all too often I see examples of wildly inaccurate estimates and assumptions, such as how many workarea recovery positions are required, or how many people can actually work from home, or the level of impact of disruption to an activity, or assumptions by well-meaning IT departments as to how quickly or otherwise the business needs a particular IT system to be available. As often as not, though we don’t often admit it, because we haven’t checked we don’t actually know and we’re just guessing.

At the last count, there are 56 Christmas trees left standing in our little wood, most of which are growing ever more humongous with each passing year. Assuming we can still find one with a decent top section each Christmas, they’ll almost certainly see me out, at least from the point of view of me felling them. Somehow, I can’t see me still playing the amateur lumberjack in my eighties or nineties (even assuming I can still a) see the tops of the trees and b) lift the chainsaw, let alone use it), valiantly attacking a two-foot diameter trunk and felling a forty-footer without seriously damaging myself, but who knows? If you’re still around then – and I sincerely hope we both are – watch this space!

* Seven or eight meters, if you live in one of the vast majority of countries that prefer a far simpler and more more sensible form of linear measurement to one based on the lengths of a previous ruler’s body parts.

** A smidge over 30 centimeters or alternatively, if you’re still wedded to ancient measuring systems, twelve thumbs, thirty-six barleycorns or just over a third of a cubit.