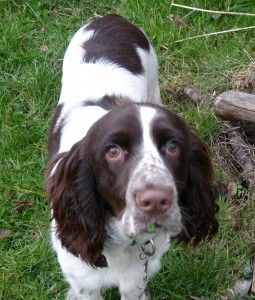 On Sunday, my wife and I took our dog Barney to Cleeve Hill, near Cheltenham for a walk. We had a very nice time, but it was ever so slightly marred by a minor altercation on our way back to the car.

Now I’m the type of chap who tends to avoid confrontation (which can, admittedly, be difficult at times when you have teenage sons). Not because I’m a cowardy-custard, you understand, it’s just that I don’t find the hot-and-bothered-ness of it all particularly gratifying.

Unfortunately, I’m not a total stranger to confrontation. I have on occasion found myself in some interesting situations thanks to a good friend of mine who seems to thrive on it.

Like the time, on holiday, when he had a small disagreement in the village store with the village nutter. I realise that’s not particularly politically correct of me but one does tend to form snap judgements when one witnesses someone punching a wooden counter, in preparation for punching someone’s head. Actually, I was a bit concerned for him at the time as I was worried that any bruising sustained might obscure the lovely tattoos on his knuckles. But I digress.

Back to our Sunday afternoon walk, part of which took us along a series of public footpaths through a golf course. There was a sign on the gate asking dog owners to keep their dogs under control, so as not to upset the golfers or the sheep that roam the course. So we duly put Barney’s lead on and continued our walk.

On the way back we saw, below us on the hill, a family and their dog, which suddenly raced off towards a group of golfers on a nearby fairway. The man made a token effort to call the dog back, which was a complete waste of time as the dog carried on making a nuisance of itself, finally running off with one of the golf balls (you can imagine how well that went down).As we continued down the hill, the rogue dog ran up to us, which was a bit of a distraction for our easily-distracted puppy. Despite a complete lack of intervention from the owner, the dog eventually left us alone and, as we passed the gentleman concerned, I just sort of felt compelled to to say something.

So I made the helpful suggestion that he might like to consider buying a lead. I was about to offer the additional advice that they’re available from all good pet shops when he replied that he did, indeed, have a lead – in his pocket. I suggested that he might like to try putting it on the dog, to which he asked why I felt his dog needed a lead on. Not wishing to insult his intelligence (he was, after all, doing a reasonable job on his own), I replied that the answer to that particular question seemed fairly evident, to which his carefully considered and reasoned reply was “shut your @&*%ing mouth”.

Having briefly considered the merits of continuing this line of jolly banter, I suggested that he might want to think about keeping his @&*%ing dog under control (touché!), at which point he sort of frothed a bit at the mouth, muttered something unintelligible (though, presumably, obscene) and stomped off. Then, bizarrely, he stopped and stared menacingly at me – a stare that I’m proud to say I returned with equal menace – we waved each other goodbye (one of those special waves, normally reserved for road rage incidents) and went our separate ways.

Understandably proud as I was with my macho performance, I have to admit that it put a bit of a damper on the afternoon and introduced an element of stress to proceedings that I could have done without.

And so to the, admittedly tenuous, point of this little tale. The point, from a business continuity perspective, is that sometimes people aren’t best suited to the situations that we inflict on them by dint of their roles in our crisis or incident management teams. Often they’re nominated because of their business-as-usual positions, and, in particular their seniority.

So we should think carefully about how we select our crisis management team, and try not to be overly swayed by job titles or internal politics – which is easy to say but not necessarily so easy to do. And we should also give proper consideration to the training that we provide for these key people.

The old adage “horses for courses” rings true here – as opposed to anything to do with dogs on golf courses!

One response to “Horses for courses”