A long and winding road

If you’ve been reading my blogs for a while you may recall one I wrote a while ago (“Keeping it together“) about my younger son’s hockey goalkeeping exploits and the fact that he was hoping for selection to the under 16 England squad.

Goalkeeping is a strange occupation. I’ve done it once and that was enough for me. For one thing, I had this this strange conflict of feelings, yo-yo-ing between wanting my defenders to clear any opposition attacks before they got anywhere near me and wanting them to mess up so I could demonstrate my goalkeeping prowess (or not, as the case may be – I think we lost 6-1). And then there was the fact that being in goal really puts you in the spotlight. Playing as I usually do either in attack or midfield, I can get away with any number of mistakes during a game. I might lose the ball through a poor pass or by trying to dribble past a defender who was too good for me or even miss a sitter (yes, it has been known). But nobody really remembers those errors for very long. As a goalkeeper, however, if you make a mistake (or if your defence does), the chances are you’re then fishing the ball out of the back of your net and everyone remembers it for a very long time. So you have to be a certain kind of person to be a goalkeeper – mentally tough as well as just plain mental!

Anyway, back to the England squad selection. “Did he get in?” I hear you ask. Unfortunately not. As you may well suspect, I might just possibly have mentioned it if he had. This is probably going to sound like sour grapes (and there may well be a smidgen of that) but Mrs Oz and I have tried to look at this objectively and we feel that there was more to the selection process than his performance at the tournament. Of the eight ‘keepers there we honestly feel that “Fred” (you’ll have to read the previous blog to understand the quotation marks) was easily as good as any of the others and quite obviously better than some. We can talk conspiracy theories or how much of a “who you know rather than what you know” element there was, and whether the club that you play for or the school that you go to matters more than it should, but it’s all somewhat moot (as opposed to mute – see “Reading and writing“) at the end of the day. He didn’t get selected and that was that.

He was gutted, as we all were. All that hard work, all that hope and ambition dashed in a moment. It wasn’t a nice time, as you can probably appreciate. As much as anything, Fred had a major decision to make. Was he prepared to pick himself up and start all over again or should he just accept defeat, give up on his ambition and settle for playing club hockey, albeit at a pretty decent level? To his credit, he chose the former. 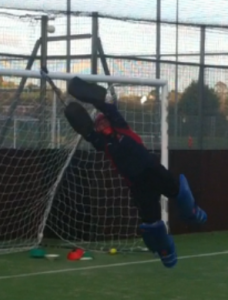 Since then he’s worked his wotsits off. He’s trained and/or played two or three times a week, sometimes more; he’s worked hard on all aspects of his game, from fitness to technique to psychology and all points in between; he did several weeks of twice-a-week, goalie-specific strength and conditioning training at Bath University (73 miles away); he’s currently halfway through England Hockey’s version of the AASE (Advanced Apprenticeship in Sporting Excellence) programme at Lilleshall (76 miles in the opposite direction); and he’s done a number of regional training sessions in Cannock (56 miles), Nottingham (83 miles) and other far-flung locations (lots of miles). Yes, the Ozcabs taxi service has been working overtime again. And, rightly or wrongly, he’s moved to a larger, “better-connected” club (a mere 30 miles away), at considerable inconvenience to our number one taxi driver.

But I have some fantastic news to report. A couple of days ago we heard that he’s been selected to play for England in the School Games in Manchester in September. It seems that the hard work is finally paying off. As you can imagine the various members of the Oz clan are somewhat chuffed to say the least (apart from Barney, who really couldn’t care less – although he will when we take him to the kennels on our way up to Manchester!)

So, apart from me blowing my own (or at least Fred’s) trumpet, what has all this got to do with business continuity management? Well, where shall I start? :

I could go on (yes, it has been known!) but that’s probably enough for now.

On September 4th Fred will take to the pitch in his England shirt (although he won’t be down on the team sheet as Fred) and no-one in the crowd will be shouting louder than his old man – although I suspect Mrs Oz will give me a run for my money. I can’t wait!

Andy is the author of the books ‘Practical Business Continuity Management‘, ‘Risk Management Simplified‘ and now ‘Ski Boots and Celery – A Compilation of Oz’s Business Continuity Blogs‘, as well as his popular blogs and ‘Tips of the Month’, all of which aim to demystify the subjects of business continuity and risk management and make them more accessible to people who live in the real world.