This is a tale from the mists of time; from days of yore when it was difficult to get people interested in business continuity management and even more difficult to secure their involvement in exercises and tests (OK, in fairness, that could have been this week, but just indulge me for a moment).

Some of you may have heard me tell this story before, but recounting ancient tales didn’t do Hans Christian Anderson (or my Dad) any harm and, in any case, I’m a big fan of recycling.

Having been asked to contribute something on exercising and testing to this year’s Business Continuity Awareness Week Flashblog, and despite conforming in terms of using the snappy title demanded of all the contributors, I really couldn’t bring myself to write about strategy or methodology or process or the difference between a test, exercise, rehearsal, etc, etc, etc. So I’ll leave that to those whose boats are floated by that sort of thing and tell you my favourite exercising story instead. 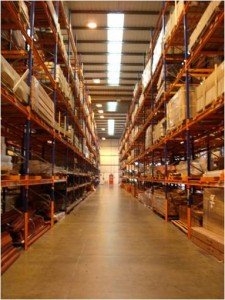 Once upon a time, in a far off place, I facilitated an incident management exercise for a retail client at one of their distribution centres. In case you’ve never seen one, a distribution centre is essentially a huge shed. This one was around 37,000 square metres (something over 400,000 square feet for those of us who still think in old money) and around 15 metres high, with floor to ceiling racking full of all manner of stuff, destined for their stores around the UK. It held around 50% of their total UK stock, so, being quite important to them, they felt they should exercise the site’s incident management and business continuity teams and their plans. A very good idea as it turned out.

Because everyone’s always got something more interesting, more important (or more anything else they can get away with) to do than look at their business continuity plans, let alone exercise or test them, this was the third or fourth time we’d tried to get the key people together for this event. But on Thursday 8th December 2005 – a date etched in my memory, as is Sunday 11th, despite the fact that I can’t usually remember what I did yesterday – we finally managed it and the exercise took place. 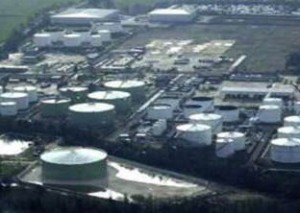 Whilst planning for the exercise I did a recce of the site. As I was wandering around I noticed a cluster of rather large fuel tanks in the near distance. On enquiring what they were I was told “that’s the Buncefield oil depot”, apparently the fifth largest oil depot in the UK at the time, with a capacity of approximately 60 million gallons (273 million litres for those of you who think in new money) of fuel.

“I could do something with those”, I thought – from a scenario point of view, I hasten to add. But my client talked me out of it, because (apparently) a) my proposed scenario wasn’t realistic as it would never happen and b) if it did happen, their distribution centre was far enough away not to be directly affected. It’s funny how wrong people can be isn’t it?

So we created a scenario involving a prolonged area-wide power failure instead. Not quite as dramatic as my original idea, admittedly, but it did the job in terms of the issues that it raised, which included health and safety, communication, security, logistical, supply chain, commercial and people issues, amongst others. The teams involved concluded that their existing business continuity plan (not written by me, I hasten to add!) had some shortcomings and identified a number of follow-up actions. After a few hours of fairly intense activity, we wrapped up the exercise and they went back to their more interesting, more important and more whatever else day jobs. 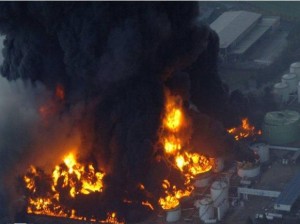 Three days later, on Sunday 11th December, the Incident Management Team found themselves doing it all over again – this time for real, after a series of explosions and a massive fire destroyed the Buncefield oil depot.

Much has been written and said about the aftermath of the Buncefield incident (I have a couple of presentations of my own that I still trot out from time to time), so I don’t plan to add to that here – if you’re not familiar with the incident, check out “Buncefield fire” on Wikipedia.

Suffice to say that the the explosions caused significant damage to a number of buildings in the vicinity, including my client’s, and the resulting exclusion zone denied them access for several days. To cut a long story short, the incident presented them with a number of issues, which included health and safety, communication, security, logistical, supply chain, commercial and people issues, amongst others. Sound familiar?

The point here is that, even though the previous exercise revolved around a completely different scenario, the issues were very similar. And, despite the fact that my client hadn’t addressed the follow-up actions identified, the fact that they’d been through the process put them, in their view, a couple of days ahead of where they would have been had they not done the exercise. Just  one practical example was the fact that they managed to rescue their fleet of trucks, whilst other companies looked on jealously and wondered how they’d managed it. The reason was simple – they’d thought it through in advance by carrying out the exercise.

People like me often promote the importance and value of exercising and testing. But there’s a good reason (apart from the obvious one of trying to flog you something!). My experience is that exercising and testing is absolutely essential for an effective business continuity programme, which is a jolly good thing, seeing as that’s the title I was asked to use for this blog.

Those of you who know me will know that I’m forever banging on about capability vs. plans. Writing a plan is the easy bit. Capability takes a bit more effort. Exercising and testing, if done well, contributes massively to the development of that capability. It often brings the business continuity programme to life and highlights its importance. If planned and executed effectively, exercises and tests will prove that strategies actually work and validate (or highlight deficiencies in) assumptions. They clarify roles and responsibilities, raise awareness and allow key players to rehearse their activities in a safe environment. If nothing else, taking part in an exercise is usually a tad more exciting than writing a plan. So why wouldn’t you? Even if you do have lots of other  important, exciting (and whatever else) things vying for your attention?

My client’s experience was that exercising was invaluable and the lessons learned helped them immensely when they had to deal with a real incident.

It does, of course, help if you carry out an exercise three days before your disaster!

Related articles : “Fortune favours the prepared“; “All the world’s a stage“; “Ready for action“