I recently had the misfortune to have to book a doctor’s appointment. Nothing serious, I hasten to add, just a minor ear-related inconvenience, but it did warrant seeing someone slightly more medically qualified than the one current and one lapsed sports first aider in the Osborne household.

Now I don’t know what it’s like where you are, but the appointment booking system at the medical practice where I’m registered is, not to put too fine a point on it, pants. It goes something like this…

Step 1 – the patient – or, as I prefer to call myself, the customer (although I realise that’s very much an alien concept to the receptionists at said medical practice) either goes onto the Heath centre’s website or ‘phones the surgery at a time that’s convenient to them.

Step 2 – an appointment is booked for a time that’s convenient to the customer, within the next few days.

Ah, no, sorry, I’ve got that slightly wrong. That’s a sensible process that would meet the requirements of most normal people. The actual process goes like this…

Step 1 – the customer goes to the health centre’s website and clicks the ‘Book an appointment’ button. The system tells them there are no appointments available and advises them to ‘phone the surgery. 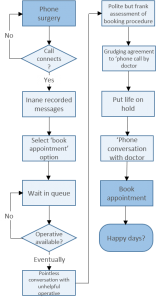 Step 2 – the customer ‘phones the surgery at a time that’s convenient to the customer. The receptionist, who has all the charm and customer  service skills of a Rottweiler with a hangover, tells them that they should have ‘phoned at 8am for a same-day appointment, failing which they can book one for thirty days’ time. The customer declines this generous offer on the grounds that in thirty days they are likely to be either better or dead.

Step 3 – the customer ‘phones again at 8am the following morning. The line is engaged until 8:27, at which point they get a recorded message that spends four minutes imparting a stream of utterly irrelevant information (surprising as it may seem, for instance, in my experience, most  people actually know that they should call 999 if it’s an emergency, and most of us don’t really want to know about flu jabs for pensioners, or that they’re available from September!) before being asked to select options 1, 2, 3 or 4, each of which has a two-minute story associated with its use. Rapidly losing the will to live (which may well be part of the strategy) the customer presses the appropriate number and finally gets through to Mrs Rottweiler, who tells them that all the appointments for today have gone and they need to call again at 8am the following morning.

Step 4 – the customer has a massive strop and is finally told that a doctor will call them to discuss their problem and decide whether they’re worthy of actually being seen. Upon asking when this is likely to be, the customer is assured that it will be by 9am at the latest.

Step 5 – the customer avoids doing anything productive in case they miss the doctor’s call. It’s only another 20-odd minutes, after all. The doctor calls at 9:57. The problem is explained and the doctor tells the customer that he wants to see him.

Step 6 – an appointment is finally offered. At 10:30. Not only is this now completely nadging up the customer’s morning – not that they had anything better to do, obviously – but the doctor has now effectively doubled the number of appointments and the time he’s going to spend talking to said customer, which presumably is the exact opposite of the intended outcome of this ridiculous process.

So I dropped everything – not that I was really doing anything at this point – jumped in the car and headed off to the surgery, where I sat waiting until 11:05 for my 10:30 appointment. The appointment itself lasted four minutes. It had cost me an entire morning’s lost working time.

Infuriating as it was, it gave me pause for thought. My first thought was that, as a colleague in a previous life was wont to say “it was like déjà vu all over again” (see ‘Is it just me (part 2)‘). My second thought was that some of the issues highlighted by this latest palaver aren’t just applicable to nonsensical appointment booking systems.

Firstly, some business continuity plans, and the processes and procedures therein, are unnecessarily convoluted, unwieldy and difficult to follow, and would benefit from some serious pruning.

And thirdly, whilst the Business Continuity Manager or IT department might think that a particular recovery time is acceptable, it’s a really good idea to ask your stakeholders for their views. Assumption is, after all, the mother of all foul-ups.

I’m off to lie down in a darkened room and listen to my mindfulness app. Ah, no, slight flaw in the plan – I won’t be able to hear it. I’ll explain why next time.