They say that pride comes before a fall so perhaps I only have myself to blame.

In my last blog I expressed my pleasure at taking delivery of a shiny new car (see “Pressure tested“), and very nice it is too. Since then, however, I’ve had one or two “issues” involving said vehicle, aside from my ill-fated car washing attempt. The first happened not so very long after that.

Driving to work one fairly grotty morning things didn’t feel quite right stability-wise. I was, however, on a notoriously wibbly bit of road and I thought that maybe the wind had got up a bit, so I didn’t think too much more of it. Until I got to work to discover that one of my rear tyres was almost flat. 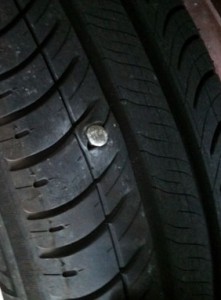 At lunchtime I pumped up the offending tyre and drove a couple of miles to my local tyre centre, where they discovered a dirty great nail stuck in the tread. Now, my lease agreement includes maintenance, so whenever the car needs a service or new tyres the finance company foots the bill. Except that the tyre thing only applies to wear and tear, not punctures.

The tyre centre manager was a very nice chap. Filthy, obviously, but I didn’t hold that against him. What I did hold against him was the fact that he couldn’t possibly repair the tyre because I’d driven on it. As opposed to getting to the tyre centre by telekinesis or time travel, presumably. I really, really wanted to question him on that score, but I thought it might prejudice my negotiating position.

After several minutes of getting absolutely nowhere fast on the repair front I had to bite the bullet and get my credit card out. A hundred and eighty seven quid later (plus three for the valve – silly me to expect it to be included!) I drove out, chuntering quietly to myself, as, somewhat worryingly, I find myself doing more and more often these days, and wishing I’d had the telekinesis conversation after all.

Not long after the tyre incident Mrs Oz ‘phoned me to report another small issue with the car. Driving to school to pick our son up, on a road which is always heavily populated with parked cars, she’d stopped to let the oncoming traffic through as it had right of way. Unfortunately, boy racer behind her wasn’t paying attention and came to a slightly more sudden stop when he discovered almost two tons (or, if you prefer, almost two tonnes) of four-by-four impeding his progress. 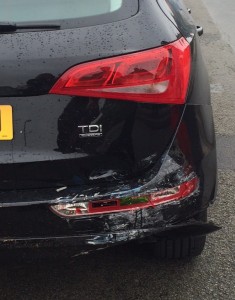 I made the classic mistake. “How bad is the damage?” I asked. Oops. “Are you ok, my dear?” I rapidly followed up with. I think I got away with it but I wouldn’t necessarily recommend that as the ideal sequence of questions in such circumstances. Thankfully it turned out that Mrs Oz was fine, which was more than could be said for my lovely new car.

Now the trouble with new cars, a fact that I’d never really given much thought to before, is that spare parts aren’t always readily available. Especially, as it transpired, rear tailgates and bumpers for this particular vehicle.

And the relevance to business continuity management?

Well, firstly, this puncture was the third one I’ve had in as many years (see “It’s just not cricket“) – all of them the result of a nail in one of the rear tyres. I’m starting to get a bit paranoid about it. After all, what are the odds of that?

But just because you’ve experienced a particular incident, disaster, crisis, or whatever you choose to call it, doesn’t mean you’re necessarily immune from it happening again. 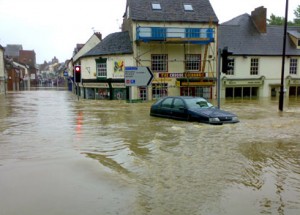 I’ll give you another example. Easter 1998 was a bit rainy in the UK. So rainy, in fact, that the river in Evesham, not too far from where I live, rose something like eighteen feet (almost five and a half metres in new money) above its normal level, causing severe flooding and affecting lots of local businesses and residents.

It was described as a “hundred year event” by those who apparently know these things. Then, in 2007, the same thing happened again, demonstrating with near-perfect irony that probability statistics are about as useful to business continuity practitioners as a chocolate teapot and that our continuity strategies and plans should, in the vast majority of cases, be based on impacts rather than specific risks.

Secondly, we should always check the small print in our contracts, whether they’re for business continuity or business as usual outsourced services, so we know exactly what we’re going to get in the event of an unforeseen event.

And thirdly, we need to check that the assumptions we make are correct with regards to the availability of stuff that we need post-incident – whether it’s IT systems, people, plant, equipment, information or whatever – because the time to find out that our assumptions were wrong isn’t when we’re having our crisis.

For the last few weeks I’ve been enjoying driving my shiny new car and, touch wood, I haven’t had any further incidents to speak of. Unless, of course, you count reversing into Mrs Oz’s car or having a cat sleep in it. But I’ll save that for a future blog.

Related articles : “Have you heard the one about…?”; “A source of embarrassment”