The ramblings of a travelling consultant – episode 8

I recently spent a week in Sofia in Bulgaria, with a colleague, helping a client with some business continuity exercises and tests. The work went fine and, as expected, an assortment of successes, gaps, suggested improvements and follow-up actions were identified. Client confidentiality prevents me from divulging further details – that and the fact that it would make for a very boring blog – so I thought you’d probably rather hear about some ancillary issues that we experienced instead. 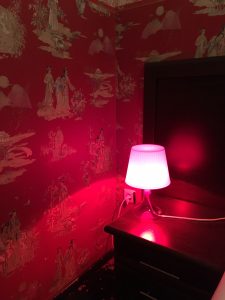 The first issue was our hotel, an apt word for which would be ‘interesting’. The first interesting aspect was the salubriousness (or, rather, the lack of it) of the area it was located in. Admittedly it was dark when we arrived but it seemed to be in the middle of an industrial estate, approached via what looked very much like a rubble-strewn wasteland. The second interesting aspect was the utterly miserable reception staff. The third was the bedrooms. I’ve stayed in an awful lot of hotels (some of them particularly awful) over the years but never one quite so orientally-themed as this one. Not even in Hong Kong. In fairness, I’ve never been to mainland China, but this was, after all, Sofia not Shenzhen. And I’ve certainly never stayed in one quite so red. Everything, from the bedspread to the wallpaper, was red. Even my reading lamp was red. And it flashed on and off when I switched it on, which was a tad disconcerting given the aforementioned salubriousness of the area. I quickly closed the (red) curtains, so that people outside didn’t get the wrong idea. As it turned out, I was closer to the truth than I thought, but I’ll come to that.

I unpacked, hung the things that needed hanging in the wardrobe and made my way to the restaurant, which, thankfully, wasn’t quite so red. It was also about as far from orientally-themed as it’s possible to get. I felt that the decor didn’t really go with the techno music, which wasn’t so much in the background as in your face, but I don’t claim to be an expert in restaurant ambience and the other diners didn’t seem to have a problem with it – although it’s quite possible that they had other things on their minds. 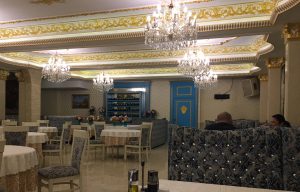 Despite my low expectations, the food wasn’t half bad. It was, however, served in an interesting order. First to arrive was my colleague’s starter. So far, so good. This was followed, after a wait of about five minutes, by my main course. After another ten minutes my colleague’s main course arrived and, just as we were discussing checking the bill to make sure we hadn’t been charged for my absent starter, it finally put in an appearance. Better late than never, I suppose.

Back in my room, I attempted to read a report before turning in. Unfortunately, to save paper, I’d printed it two pages per sheet. This in itself wasn’t a problem, until combined with the extremely dim lighting, the result of which was that I couldn’t actually read it (I now have some reading glasses, by the way). In the end I resorted to dismantling the bedside lamp, in an effort to stop it flashing and enable it to actually be used as a reading lamp. This turned out to be no mean feat as, on closer inspection, it turned out to be a sealed unit, entirely made (presumably in China) of a really cheap and nasty plastic. A generous helping of brute force and ignorance provided access to the now not-so-sealed unit, exposing the bulb, which, after a bit of judicious twiddling, finally ceased flashing and provided just enough light (with the red lampshade duly removed) for me to read my report.

And so to bed. Cue the obligatory noisy fan, which I hadn’t really noticed until I attempted sleep. To be fair, I’d have been surprised if there hadn’t been one, as most hotels seem to fit them as standard these days (see ‘The ramblings of a travelling consultant – episode 4 (part 2)‘ and ‘The ramblings of a travelling consultant – episode 6 (part 1)‘). Not a problem for the seasoned traveller, however. Out came, and in went, the earplugs, an ever-present item in my travel bag these days, enabling me to get a decent half-a-night’s sleep. Only half, mind you, as I woke in the early hours worrying that I wouldn’t hear my alarm go off!

In the morning I experienced the delights of my ‘interesting’ shower, the output of which oscillated between scalding and near-freezing. At breakfast, we got to see the ‘interesting’ other guests. Now I’m not a snob, but even in my ‘business casual’ attire, I felt massively over-dressed compared to the other diners, who had clearly eschewed business-casual for just plain casual. Another word might be ‘informal’ or, perhaps, ‘industrial’, assuming one wanted to be polite. If not, then scruffy or ‘tramp-like’ might be more accurate.

Breakfast itself was ‘interesting’ too, with several unidentifiable items on the buffet. Now I don’t particularly have a problem with unidentifiable items on the breakfast buffet and when I’m on holiday I may well be brave enough to try some of them. But when  I have business commitments to fulfill I tend to play safe and stick with stuff that I recognise. Generally speaking, you can’t really go wrong with coffee (see ‘ A nice cup of tea‘) but I have to say that the coffee served at breakfast in this particular hotel was, without a shadow of a doubt, the worst I’ve ever had. I like strong coffee but this stuff was undrinkable. I tried my best but after just a few sips I had to admit defeat and throw in the towel, as did my colleague.

Like the coffee, the taxi drivers in Sofia are something of an acquired taste. The driver who had to use a magnifying glass to read the address of our hotel was a bit worrying but the next day we met what has to be Bulgaria’s grumpiest. First we had a ‘conversation’ which basically involved him shouting at us in Bulgarian before starting to drive off without us. In hindsight, we should have waved him a fond farewell but we made the mistake of having another try. Seemingly unable to understand where we wanted to go, despite me showing him the address and the exact location on the map on my phone, he shouted something into his radio, thumped the steering wheel and screeched out of the hotel car park into four lanes of nose-to-tail traffic without slowing down. He somehow threaded his taxi through several impossibly small gaps without killing us all and screeched to a halt at our destination, whereupon he pretty much threw a receipt at us before screeching off again. How rude. I can only assume that he’d had a whole cup of the local coffee with his breakfast.

During coffee break small-talk at the client’s office, we were told that the hotel we’d been booked into is used mainly by truckers – which explains the appearance of three-quarters of the clientele at breakfast – and that, day or night, rooms can be rented by the hour – which goes some way to explaining the appearance of the other quarter. Just as well I dealt with the flashing red light then. Much merriment ensued, after which, I’m delighted to report, we were booked into another hotel, although we did first have to endure another night, and another breakfast, at the ‘interesting’ one first.

I’ve used the word ‘interesting’ several times in this blog, and that prompted me to wonder how the word might be relevant to business continuity management (I can’t help it, it’s just the way my mind works!).

Firstly. those of us who live and breathe business continuity management may find it difficult to appreciate, but (shock, horror!) many people, particularly those with ‘proper’ jobs, don’t find the subject particularly interesting. Which is a shame. Because, believe it or not, it can be made interesting with a bit of thought and a bit of effort. Whilst the business continuity process itself isn’t particularly exciting (but, to be fair, what process is?), the way it’s packaged can make all the difference. It really doesn’t all have to be completely dull and a teeny bit of creativity in the approach to the way the process is implemented can make a big difference to people’s willingness to engage.

Secondly, I’ve seen a lot of ‘interesting’ business continuity plans over the years. That’s the polite way of putting it, by the way. In this context, ‘interesting’ can mean anything from incomprehensible to utterly useless. Because too many plans are either difficult (if not impossible) to follow or they’re based on flawed assumptions and/or have gaping holes in the strategies and solutions that supposedly underpin them.

There is, purportedly, a traditional Chinese expression, which translates as “may you live in interesting times” and is said to be a curse rather than a blessing. Whether or not this is true, it seems rather apt, so I’ll leave you with that thought.

One response to “The ramblings of a travelling consultant – episode 8”