The ramblings of a travelling consultant – episode 7

I do a fair amount of travelling. It goes with the turf really, particularly as Evesham, where I live, being somewhat rural, isn’t exactly a hotbed of business continuity consultancy opportunity. Much of that travelling takes place in my car.

Most of the time it goes OK, insofar as I make it from A to B alive and without serious incident – notwithstanding the occasional observation on the driving ability of my fellow road-users. Occasionally, however, things don’t go quite to plan (see ‘It’s just not cricket‘, ‘The ramblings of a travelling consultant – Episode 4‘, ‘What’s the damage?‘ and ‘A cracking story‘,) and I thought I’d share one such occasion with you.

I was driving through the picturesque Oxfordshire countryside, minding my own business, when my car felt the need to ‘bing’ loudly at me (is it just me or is there far too much binging these days?), suggesting that it had something to say that was far more important or interesting than the audio book that I was listening to.

I glanced at my dashboard, expecting the usual “you only have a few hundred miles of fuel left” message, to find it illuminated with a picture of a cog and an ‘R’ with a line through it, accompanied by the very helpful message “Gearbox malfunction. Reverse gear not available. You can continue driving”.

“OK”, I thought, “if you’re happy to carry on, then so am I”, mainly because I was on my way to a client meeting and I didn’t want the embarrassment of having to ‘phone and cancel. It struck me that I’d have to find a parking space that I could drive into and out of forwards but, as it happened, that thought turned out to be somewhat premature.

It soon became clear that the message had omitted the word “normally” from the end as, having stopped at a red light, I pulled away and my automatic gearbox became distinctly un-automatic, refusing steadfastly to change from first to second gear. I did a quick check to make sure I wasn’t inadvertently in Mrs Oz’s car, which has a manual gearbox (a fact that, admittedly I occasionally forget – until the screaming engine, or the fact that I’ve stalled it, reminds me) and concluded that I wasn’t, on the grounds that if I was I’d just driven about forty miles without changing gear, b) hers is red and mine’s black and c) they’re completely different in almost every other respect.

My car remained in first gear for an unusually long time, and reached an unusually high level of rev’s before changing up, with a clunk, into third gear. It then remained in third for far too long before eventually changing up to fifth in the same manner. Now I’m not an expert on automatic gearboxes but this didn’t seem quite right to me. Much as I didn’t want to miss my meeting, I now had serious doubts about whether I was actually going to get there. It being my considered opinion that the M25 wouldn’t be the best place in the world for the rest of my gears to go AWOL, I decided that discretion was the better part of valour, ‘phoned my client and turned back.

My decision was vindicated by the fact that things got steadily worse and just a couple of miles later I pulled into a lay-by to call the recovery service. They said they’d send a man in a van, who should be with me within an hour and a half. So I made a couple of calls, during which I watched a couple of buzzards hovering  overhead. At least I think they were buzzards, I’m not that good on my birds of prey. I know they were bigger than kestrels and, despite my initial worries, I concluded that it was a bit premature for the vultures to be circling. To be on the safe side, I decided to stay in the car and break out my rations, which consisted of one banana, after which I got out my laptop in order to use the waiting time a little more productively.

As promised, almost exactly an hour and a half later, said man in said van arrived. He plugged in his diagnostic box, pressed a few buttons then told me what I already knew and had already reported to them. The conversation can be summarised as “your gearbox is broken, a recovery vehicle should be with you within an hour and a half, sign here, bye”. I expressed my disappointment that he hadn’t brought a replacement gearbox; or a tow truck; or anything other than a black box that told him exactly what the equivalent black box in my car had already told me, at which point he smiled politely and left me to my buzzard watching.

To cut an already long story short, I eventually got home some four hours later, having abandoned my car at the ‘local’ dealership (some twenty miles from home), and impinged on Mrs Oz’s plans by asking her to come and fetch me.

It turned out that a replacement gearbox was needed. Which had to be shipped from Germany, because apparently that’s more efficient than keeping any in the UK. I beg to differ. But what do I know. After all, I’m only the customer. The end result was that German efficiency meant that my car was now off the road for a week.

You wouldn’t believe the hassle I had organising a replacement car, largely due to the extremely small print in my lease agreement that basically said I had to pay for my free replacement vehicle after 48 hours, as well as continuing to pay the lease on the dead one. 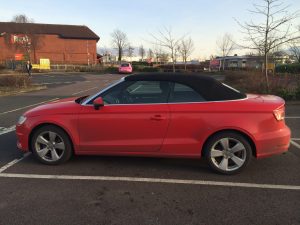 Eventually, after many, many ‘phone calls, to their credit, the dealership sorted me out – with a little red cabriolet, described by one of my sons as a “hairdresser’s car”.  I feel I should point out that I have absolutely nothing against hairdressers. Some of my best friends have been to hairdressers. But I understood what he meant. Compared with my big, macho, black, four-by-four, two-ton, testosterone wagon, the little red one was a tad ‘hairdressery’. Even the nice lady at the dealership who booked me in described it as “a bit of a girlie car” (her words, not mine). But at least it had a gearbox that worked – albeit a manual one, with all the added interest that that brought.

And so to the business continuity part.

Firstly, no matter how reliable we assume things are, sometimes they break, often spectacularly and usually at the least convenient time.

Secondly, remote working isn’t always all it’s cracked up to be. In theory, as people so often tell me, mobile technology enables us to “work from anywhere”. But there’s working and there’s working. Yes, I was able to do a bit on my laptop and mobile ‘phone from my car, as I sometimes do on a train or a ‘plane, or in an airport or a hotel room, but I will happily argue with anyone who claims that they’re anywhere as near efficient and effective doing this as they are when they’re working in their office (see also ‘No business like snow business‘).

Thirdly, we come to the business of outsourcing, supply chains and service level agreements. Not that I have any issue with outsourcing per se. What I do have a problem with is a) service level agreements that totally disregard the customer – the manufacturers of my car (who shall remain nameless to protect the guilty, and to reduce the likelihood of a call from their lawyers) outsourced their recovery service to a large, well-known, nationwide recovery service (who shall remain nameless, etc), who in turn, outsourced to a local ‘man with a couple of vans’ recovery company. Whilst everyone in the chain met their one-and-a-half-hour service level agreement with each other, the result was that I sat in a lay-by for over three hours. Moreover, the first two tried to pass the buck and blame their suppliers for the delays. I really didn’t care who was outsourcing to whom – the only name I was interested in was the one on my car. And, by the way, I don’t doubt that five days to ship a gearbox from Germany met someone’s service level agreement too, but it didn’t meet my expectation and it didn’t impress me one bit.

A bit of a tangent, admittedly, but the point is that, whatever outsourcing agreements you have with your suppliers, if you can’t meet your customers’ expectations, whether it’s as a result of your ill-thought-out service level agreements or a failure in your supply chain, it’s your name, not your suppliers’, that your customers (and other interested parties) will focus on. And trying to blame your suppliers really isn’t a good crisis management strategy (some have tried this and failed spectacularly – no names, no pack-drill!) so my advice would be to just not go there.

After a week of a) parking the little red cabriolet where none of my clients was likely to see me getting in or out of it and b) enduring an inordinate number of scathing comments from my son, I was glad to get my own car back. Of all the cars I’ve had over the years, it’s probably the one I’ve enjoyed driving the most – when it works, of course. After this experience, however, there’s a good chance that I’ll go for a different make next time. And I may well use a different leasing company too. Which, I suppose, is another salutary lesson in the dangers of not meeting your customers’ expectations.

One response to “The ramblings of a travelling consultant – episode 7”