The ramblings of a travelling consultant – episode 6 (part 2)

A couple of blogs ago I wrote about a trip to Oman (see “The ramblings of a travelling consultant episode 6, part 1“) and a couple of minor glitches I experienced while I was there. I promised to finish the story with a part 2, so here it is. 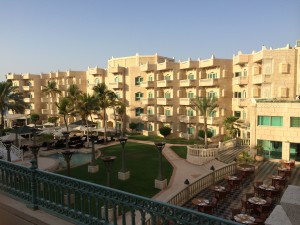 I went with a colleague, who I’ll call Bill so as to protect the innocent – and embarrass the guilty! We stayed in a big swanky hotel near the beach, which had a pool, a gym, a couple of shops and four or five bars and restaurants. And very nice it was too.

As you can probably imagine, it was quite warm in Oman, so the well-prepared traveller would obviously have packed a pair of shorts to wear during non-working time. I hadn’t. Bill had, and he chose to wear them on the second evening when we met in one of the hotel bars for a pre-dinner aperitif. We were immediately asked to leave. They had a dress code and, whilst the waiter’s fancy dress sailor suit was apparently acceptable, shorts weren’t. Personally I thought Bill’s shorts were OK, although I’d have understood if we’d been told we were being ejected because his legs were upsetting the diners.

So we went to the “Sports Bar” around the corner instead. This was a far less formal venue and shorts were perfectly acceptable there. Indeed, Bill’s were quite conservative in comparison with some others on display. You see, although there were TVs around the walls showing football, motor sports and wrestling, the main sport in the Sports Bar involved several “ladies” of a certain type in very short dresses or very skimpy shorts being overly nice to the “gentlemen” in the bar. Now I don’t mean to sound uncharitable but one (how shall I put it?) somewhat mature and (I’m afraid there’s no way of gilding the lily here) particularly grim looking “lady” wandered over to us and engaged us in conversation. We politely declined her offer to let us buy her a drink and she moved on to a more likely punter while we sat giggling like schoolboys. It was hugely entertaining in one respect, though obviously not quite so amusing for the ladies involved, particularly when you saw some of their would-be clients.

It reminded me of the time, some years ago, when I made the mistake of walking from Kings Cross station in London to a client’s office not too far away. It looked OK on the map, but what maps don’t necessarily show you (at least they didn’t in those days) is the salubriousness of the area you’re planning to walk through. I was asked, at a bus stop of all places, if I wanted “business” by a similarly “mature lady” (she couldn’t have been far off drawing her pension) in a very short leather mini-skirt and not a whole lot else. At 9.30 in the morning for goodness sake. Again, faintly amusing but also somewhat depressing to think that I obviously only attract a certain type of hooker!

Back to Oman. The next evening we returned to the trousers bar. Leg coverings satisfactorily deployed this time, Bill was allowed to stay. It was then that I discovered his guilty secret. Something that I found quite shocking if I’m honest – as, I’m sure his Glaswegian relatives will if they ever find out. Bill is a rosé drinker! 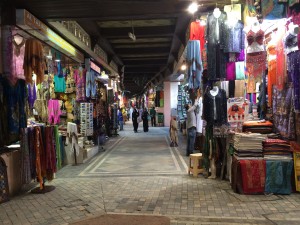 The following evening we went into town, strolled around the harbour and visited the souk, where I bought some quality souvenirs. These included a hat for me and a pashmina (for any blokes reading this, that’s a scarf) for Mrs Oz. For some obscure reason the shopkeeper felt he needed to prove to me that it was made from llama wool. He did this by setting fire to one of the tassels and telling me to sniff it. Obviously I could tell it was genuine straight away, so I bought it. 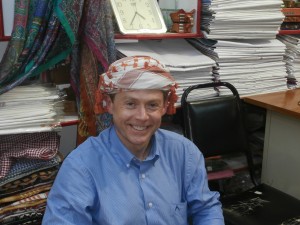 In a moment of madness I also bought two replica ceremonial daggers for my sons (what on earth was I thinking?) and a Rolex watch for me. Not quite as genuine as the llama wool, admittedly, but what can you expect for fifteen quid. I haggled the price down from twice that, I’m proud to say, as it must have been worth at least ten.

The bracelet was a bit big for my puny wrist but the shopkeeper assured me that it could be adjusted to fit. The jeweller back in the UK disagreed, however. With a big grin on his face. So if any of you have fat wrists and want to buy a genuine fake Rolex, let me know as I have just the thing for you. And it’s a bargain at just £40.

At the end of our stay we had the whole day and evening before our flight home – an uncommon bonus, so we made the most of it by booking on a boat trip to see the dolphins. About fifteen like-minded tourists boarded a small boat and we headed out to sea. We went miles, without seeing anything but sea and a few other similar boats. Not a sausage, let alone anything resembling a dolphin.

As Oman disappeared out of sight behind us my mind returned to the film I’d watched on the flight over – Captain Phillips. For those of you unfamiliar with it, it’s about a ship (a slightly larger one than ours, admittedly) being attacked by Somali pirates after setting sail from Oman! I’m pleased to say that we weren’t and we eventually got to see the dolphins, which was a fantastic experience. 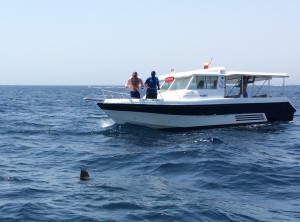 We also saw a shark. Our boat stopped, the skipper cut the engine and pointed out a black fin in the water. Everyone immediately moved to that side of the boat for a better look, tilting it alarmingly. Then someone asked if the shark was a man-eater, which the skipper confirmed was indeed the case, at which point people hastily returned to their seats for some reason. I’m delighted to say we made it back to shore without being kidnapped by pirates or eaten by sharks and we spent a pleasant, though relatively uneventful, afternoon and evening by the hotel pool before flying home.

So, I suppose I should include some references to business continuity management. I assume it’s what at least some of you are here for, after all.

The first point is a somewhat tenuous reference to the shorts issue. It’s advantageous to have the right facilities and equipment available when you need them. And that requires proper planning and preparation, in advance, otherwise you run the risk of them not being available. Just as importantly, though, you need to know how and when to use them if they’re to be effective. The right facilities and equipment inappropriately deployed are unlikely to be of much use.

The second point is an even more tenuous link to the watch, which didn’t fit when I bought it and couldn’t subsequently be adjusted to make it fit. So, even at what seemed like a bargain price, it was a waste of money. This can apply just as well to business continuity products and services, whether that’s consultancy, software, IT or workarea recovery services, or whatever. Firstly, one size doesn’t fit all and secondly, as with many things in life, we should beware the apparent bargain until we’ve confirmed that it actually meets our needs.

I can’t think of even the most tenuous link to the “ladies” so I’ll pass on that one for now. If you have any suggestions, let me know by posting a comment (do be aware, though, that all comments are vetted and may be moderated if they’re deemed inappropriate. I still get to read them though so don’t let that stop you posting them!).

I really hope to return to Oman someday as I enjoyed my all-too-brief time there and met some really nice people. And anyway, I need to take my watch back and get a refund, which I’m sure won’t be a problem. The shopkeeper was, after all, my best friend. If I go back to the same hotel, however, I’ll probably give the Sports Bar a wide berth!

Related articles : “All the gear, no idea”