I spent last weekend in Wales, at the world-famous annual golfing event, the Abersoch Open. There’s a blow-by-blow account in my previous blog “@TheAbersoch” so I won’t repeat too much of it here. 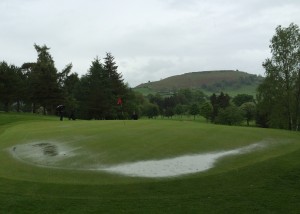 Suffice it to say that it was just about the wettest weekend in living memory, I played like a rank amateur, my team lost heavily, I think I have trench foot and my car still smells like a stagnant pond. Apart from that it was great fun.

There was one aspect, however, that I do want to mention in a bit more detail, because, unlike my last blog, it does actually have some relevance to business continuity management.

You see, I had a plan – for the associated blog at any rate. My golfing plan consisted of playing a massive three rounds since last year’s Open, not practising at all and somehow expecting to play like a real golfer. Anyway, back to the blog plan. I decided to go about things a bit differently this year. My plan was to record events (almost) as they happened, via Twitter and to consolidate those Tweets into said blog. So I duly researched how to insert tweets into a blog post, set up a new Twitter account (@AbersochOpen) on which to record events for posterity, told my golfing buddies what I was planning and asked them to contribute with their own tweets, and wrote the blog’s introduction. The plan looked good. Then I tried to put it into action, at which point a few previously unconsidered issues surfaced…

Firstly, my plan to tweet the action (almost) as it happened failed miserably. Despite what the mobile ‘phone companies tell you about their 99% coverage across the UK, shock horror, mobile reception in the wilds of mid-Wales isn’t actually all that great. This is particularly true out on the golf course at Builth Wells (who’d have thought it, eh?) but also in the clubhouse and at our hotel, where the fabled wifi only seemed to work in a particular, and particularly small, corner of the lobby.

Secondly, when I did manage to get a mobile signal, trying to tweet between shots proved to be a huge distraction and didn’t, I suspect, do anything to improve my already shaky game. I’d also overlooked the fact that I wear contact lenses when golfing and when I have them in I have to wear reading glasses to see anything close up (see “A spectacular disaster“). And yes, you’ve guessed, I didn’t have my reading glasses in my golf bag.

Thirdly, it’s a good idea to make sure your ‘phone is fully charged before embarking on a four and a half hour venture into the unknown, wouldn’t you think? Enough said!

Fourthly, my assumption that other members of the party would assist by tweeting stuff themselves proved largely unfounded, so I ended up with my head down over my phone for much of the weekend – the exact opposite of my cunning plan.

Fifthly, the resulting blog, far from being concise as I’d intended (it is, after all, made up of tweets, which as you probably know, are a maximum of 140 characters each) ended up being quite lengthy, at least in terms of scrolling through it, if not the actual detail.

“So”, I hear you cry, “what’s all that got to do with business continuity management?”. Well, it’s like this…

Sometimes our plans, created, as they almost certainly were, with the best of intentions, just don’t work when they’re called upon – because they’re untested, contain incorrect assumptions or have dependencies that aren’t there when we need them.

As Mike Tyson so succinctly put it “everyone has a plan ’til they get punched in the mouth”. The trick is to minimise the chances of being hit in the first place.

Related articles : “Personal effects“; “Touchy feely“;  “When is a plan not a plan?”