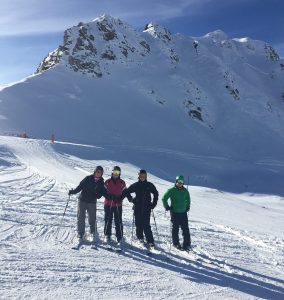 The Osborne family has recently returned from a skiing trip in France, our first in four years (see ‘Piste again‘). Actually, for family, read family plus one, as this year we were joined by our lodger, AKA number two son’s girlfriend. For the avoidance of doubt, I should reiterate that the ‘number two son’ label refers to the order of appearance, as opposed to any favouritism (see ‘University challenge‘). I like to think I treat both my sons equally – at least with equal levels of intolerance and impatience.

Anyway, I’m pleased to report that we managed to survive the week without falling out too badly and a spiffing, and for the most part (more about this shortly) accident-free, time was had by all. This in spite of the testosterone-fuelled entreaties from number two son to ski the black runs on day one – despite a) not having skied for four years and b) the low cloud that had reduced the visibility to about six feet – and to race each other at every possible opportunity.

Whilst the Osborne’s have skied quite a lot over the years, it was the lodger’s first time, so she had lessons in the mornings and we skied together in the afternoons, during which time I like to think I gave her the benefit of my vast experience and expertise. Except that it’s probably thirty-something years since I last snowploughed and I managed to fall over trying to remember how to do so. On a nursery slope. In front of a great many people. Including my sons. Perfect.

Much as we enjoyed the holiday, unfortunately that enjoyment was ever-so-slightly marred by three events – aside from the now legendary snowplough face-plant incident.

The first happened on our last afternoon in the resort. The girls were tootling down a blue run whilst the boys had taken our testosterone off to more challenging slopes. Number two son’s girlfriend took a bit of a tumble. Nothing too serious, although she lost a ski in the process, which was retrieved by a very nice Frenchman.  He was just helping her up when a snowboarder attempted to jump over her, failed, and caught her on the head with his board. Thankfully she was wearing a helmet so, whilst badly shaken, she wasn’t seriously hurt, but it could have been much, much worse. The helpful Frenchman was livid and proceeded to tear the boarder off a strip. To which, unbelievably, he replied “Well, I thought I could make that jump. And anyway it wasn’t me who fell over”, following which he beat a hasty retreat, leaving those who had witnessed the incident gobsmacked.

When number two son found out he was, quite understandably, livid and wanted to go looking for the offender. Unfortunately, in the stress and confusion of the moment, no-one really noticed what the idiot snowboarder looked like in any detail, other than he probably had a beard. Hmm, a snowboarder with a beard, that really narrowed it down. The only potentially more useful bit of information was that he might have been wearing orange trousers. You’d think that would help quite a lot. Unfortunately, this season, at least on the slopes of La Plagne, it would seem that orange is the new black. There were dozens of them. Number two son was all for taking them all on one by one, on the grounds that we’d eventually get the right one, but we finally managed to calm him down, pointing out that a probable beard and possible orange trousers weren’t really sufficient as evidence of identity. And that assault and battery is generally frowned upon, even though I was inclined to agree that the offender deserved a good slap at the very least.

I’m afraid that the incident only served to reinforce my general dislike of snowboarders (see ‘Ski boots and celery‘). Not that I wish to tar them all with the same brush, you understand. I don’t hate all snowboarders. Just the stupid ones, who give the rest a bad name. And yes, there are stupid skiers too, and they should also be forcibly removed from the slopes and locked up for their own, and the rest of the skiing world’s, good. But in my experience, the percentage of the former is exponentially higher than that of the latter.

The second ‘event’ happened when we got back to England. We were all quite tired, having begun our journey at 3am, which is the excuse I’m using for my little senior moment, when I couldn’t for the life of me remember which part of the car park I’d left my car in. Yes, I know I should have written it down, but it was 4am when we got there and with that and the rush to check in I forgot. And, in fairness, I wasn’t the only one in the car when I parked it. But the passengers were equally useless. I had a pretty good idea which row I’d parked in, within two or three at least, it was just the level that eluded me. Still, I only had seven to choose from and I knew it wasn’t the top or bottom one, so actually it was only five. I fly from Birmingham quite often and usually use the car park in question. And I normally end up on level six, because on weekday mornings the car park is quite full. So we tried level six. No joy, so we tried five. Then four. We finally hit pay dirt on level three. 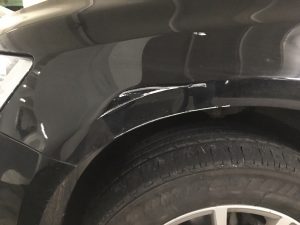 Ok, so that was a bit inconvenient but it wasn’t really anything to get overly upset about. What was absolutely worthy of getting upset about was arriving home and noticing the damage to my front wing, where the person next to me had obviously driven into it. Quite hard by the look of it. This wasn’t just a small scratch, which would have been galling enough, but a dirty great dent.

Now I don’t know about you, but if I’d done that to someone else’s car I’d have left a note, apologising and giving my contact details, thus restoring the other person’s faith in human nature and enabling our respective insurers to sort things out. Did they do that? Did they b******s. So I think I’m actually quite justified in the level of cheesed-off-ness that I’m still feeling. Still, worse things happen at sea, apparently. And worse things definitely happen on hockey pitches (see ‘Going head-to-head‘ and ‘Eye eye captain‘), and the dent paled into insignificance compared with event number three.

Having survived a week’s skiing without any serious injuries, despite his brother’s attempts to get the Osborne males killed, number one son managed to break his ankle playing hockey the day after our return, resulting in a five-hour sojourn in A&E, a couple of hours at the fracture clinic and a cast that has to stay on for at least four weeks.

Three things spring to mind from a business continuity point of view.

1. Experience is fine but you get rusty if you don’t practise regularly. That training course we went on five years ago or the exercise we participated in two years ago probably helped to raise our game at the time. But if we haven’t given it any thought since, let alone practised, how sharp do you think we’re likely to be now?

2. Our memories can sometimes let us down. That can be a bit inconvenient at times. At other times it can result in far more significant issues. Writing things down, in the form of our incident management and recovery plans can provide an aide-mémoire when we’re in the thick of things. As importantly, writing things down, in the form of our event and decision logs, can actually save our bacon if we have to subsequently justify our actions and decisions, possibly several years after the event.

3. People who have been involved in incidents are often affected in some way. Not necessarily full-blown trauma – there are varying degrees of upset. And even incidents that to some may seem relatively minor can leave a mark. But the people element is all too often overlooked in our continuity strategies and plans, other than as a resource to help with our recovery. And maybe, often as a bit of an afterthought, the inclusion of a ‘phone number for a counselling service. Which really isn’t good enough.

I’m told that one of the best ways to unwind and de-stress is to go on a nice relaxing holiday. I really ought to try it sometime!

Related articles : ‘Ready for action‘; ‘Log it or lose it‘; ‘Keeping one’s own counsel‘