A few weeks ago I took delivery of a shiny new car.

So you don’t think I’m showing off, or that I’ve won the lottery, I should perhaps explain that the previous vehicle was well over four years old and had clocked up the best part of a hundred thousand miles. More to the point, it had come to the end of its lease, so I had to say goodbye to it – somewhat reluctantly, if the truth be known as, despite the odd glitch (see “It’s just not cricket” and “The ramblings of a travelling consultant – episode 4 (part 1)”) and the fact that it had the turning circle of a supertanker and drank fuel at about the same rate my eldest son and his university mates get through lager, it wasn’t a bad car. But it had to go and the time had come for a new one. 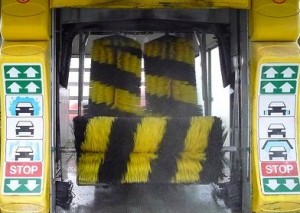 At the weekend I gave it a wash. Nothing particularly unusual there, except that my previous car cleaning activity involved driving to the local car-wash and sitting comfortably in the car whilst the machine did the work. This time, however, in something of a rash moment, I decided to actually wash it myself. Partly because my local car-wash is a bit of an acquired taste.

For one thing, it’s only a couple of inches wider than my car. Plus it’s set on a somewhat jaunty angle with a narrow access road so getting into it in my old car was always a bit of a rigmarole, owing to its bus-like dimensions and the aforementioned turning circle. I recall an “interesting” conversation with the chap on the till who, despite me attesting to having previously used his car-wash on numerous occasions, was adamant that my car wouldn’t fit in it. He even canvassed the opinions of other customers (somewhat reminiscent of the exchanges Mrs Oz used to have with total strangers about whether or not our sons were twins – see “Not what it seems”) before he reluctantly sold me a ticket after I promised to take full responsibility if I got stuck or broke either the car wash or my car. But I digress. Suffice to say that I decided to try a different tack with the new vehicle.

A few months ago Mrs Oz bought a pressure washer from the local DIY store, not because we necessarily needed one but because it was on special offer – a form of logic that I’ve never really got to grips with. I tend towards the opposite approach of deciding that I absolutely need something then paying the maximum possible price for it. Anyway, said pressure washer had been used approximately once in the five or six months since its arrival, so I decided to put it to some use. I duly read the instructions – in itself a minor miracle – which basically said plug in a hosepipe, turn on the tap, switch on the machine and away you go. What could be easier?

So I followed the instructions to the letter only to find, after switching on the machine, that my hosepipe had several leaks. The first jetted upwards like the fountain at my local golf club, fifteen feet into the air. The difference being that whereas the water from the golf club fountain lands in a small, decorative lake, my fountain rained down with impressive accuracy onto my head. A second leak squirted sideways just above ground level onto my feet. The third was due to a faulty connector which, when I wiggled it, blew off in a great spray of water which soaked me to the skin (not unlike my recent ice bucket challenge – aside from the ice cubes of course). I got even wetter when, in a moment of gross stupidity, I attempted to push the offending connector back on without turning the water off.

It was a perfectly decent looking hose, or so I thought, although it had been left lying around unused for a few months and, sometime during that period, the weaknesses had developed. And it’s the weakest parts of a hose where the leaks appear, in the same way that a chain is let down by its weakest links.

Like the hosepipe, many business continuity plans look OK when given a passing glance. But if, as is all too often the case, they’ve been left lying around unmaintained and untested for a while the likelihood is that weaknesses will have developed and they won’t work properly when you need them to.

And, just like my hosepipe, the weaknesses only really appear when the pressure is turned up. At which point it’s too late – far better to check them for leaks before that pressure situation arises.

I finally got my act together, cut out the leaky sections of hose, fitted new connectors and eventually managed to wash my car. It was a rubbish job though. In fact, after a huge amount of effort and sacrifice on my part, the car wasn’t much cleaner than when I started. So I took it to the car wash. Which is precisely what I intend to do from here on in.

Related articles : ‘A change of plan‘; ‘When is a plan not a plan‘