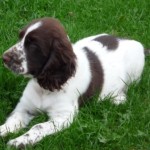 My last but one blog (“A bit of a Barney”) featured our new puppy, Barney.

He’s now had his various inoculations and is able to venture out into the world and a couple of weeks ago he spent his first day at work. The office where we work allows tenants to bring their dogs in (as long as they behave), so the intention is that, as my wife works for Acumen too, Barney will come to work with us when we’re both in the office, rather than staying at home on his own.

Anyway, it all went surprisingly well. After the initial excitement and spending the first couple of hours checking that he wasn’t chewing anything he shouldn’t (and repeating the word “no” several hundred times) he calmed down and slept for a large chunk of the day. And I’m delighted to report that it wasn’t a one-off and (touch wood) he’s remained relatively calm in the office so far. Except, that is, when Roger comes to visit.

Roger, who works in an office just along the corridor is Barney’s new best friend. When Roger calls round to play, he gets quite excited. And despite being completely house-trained he does have a teeny-weeny bladder control problem when he gets excited (that’s Barney I’m talking about now by the way, not Roger). But I digress.

I’ve actually found having Barney at the office with me quite therapeutic. I have to admit that I do tend to get a bit involved in my work, to the extent that I’ll often sit in front of my PC for several hours, hardly moving (other than my mouse finger and my two typing fingers), until I find myself staring at the screen in a semi-catatonic state or my wife spots me dribbling and suggests that I take a break for a few minutes, or at least walk around the office for thirty seconds or make a cup of tea (she out-scores me about five to one in the tea-making stakes, but I justify this to myself by the fact that she makes a much better cuppa than I do).

So having to get up occasionally to check on Barney or to take him out for walkies (which he needs regularly, for reasons that probably don’t need expanding on here) has forced me to move around a bit more that I used to. We’ve also been taking proper lunch breaks, even indulging ourselves with the odd picnic in the park just around the corner, which, I have to say beats having a sandwich at the desk hands down.

And it got me thinking (which can be dangerous, I know). As I often say to my clients when we’re putting together their crisis management and recovery teams, we all like to think that we’re super-human and can work ridiculously long hours in stressful circumstances with no impact on our performance. But, actually, we’re not and we can’t and there comes a point at which we become ineffective if we try to.

So we really need to recognise this fact. We need to nominate alternates for all our key players. And in the event that we have to invoke our plans, we need to ensure that people take the occasional break and that no-one works such long hours that it affects their performance or their wellbeing.

We all need to re-charge our batteries occasionally, whether we’re a seasoned 40-something-year-old, super-human (deluded?), slightly obsessive, workaholic business continuity consultant or a fifteen-week-old puppy.

One response to “Paws for thought”