It’s been an interesting few days. If I had to sum them up in one word, I think that word would be “watery”. Let me explain why.

Large parts of the UK have experienced wet weather for a couple of weeks now. On Friday there were something like seventy flood warnings around the country, with lots more rain forecast over the weekend. On Saturday morning I went downstairs, let Barney out, put the kettle on and checked the post. 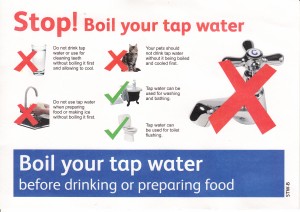 There was a card advising us not to drink the tap water without first boiling it, and a very apologetic letter from the water company telling us that the water supply had been contaminated. This was fantastic timing as I’d downed a glass of water about two minutes before I checked the post. I was now also regretting the large glass of water I’d drunk before bed the night before, as part of my new increased-water-intake regime, which is apparently going to make me healthier. Funnily enough, on Friday I started writing a blog about this, which I’d originally given the title “Water, water everywhere” but that’s now been trumped by this one so it’ll have to wait. But I digress.

As you might reasonably expect of the family of a consummate business continuity and crisis management professional, the Oz’s keep an emergency pack at home, which includes, amongst other things, some bottled water. The trouble is, we’d used it and hadn’t got round to replacing it yet. So, straight after breakfast I popped to the local supermarket to buy some, hoping I’d get there before the panic-buying started. It was fine and they had loads, so I put a couple of packs in my trolley. Then I remembered that the letter had suggested it could be two or three days before the tap water was ok to drink again so I went into panic-buying mode myself. I resisted the urge to go completely overboard and load the car up to the gunwales and settled for two more packs. Twenty-four two-litre bottles should see us through. I got home to find that the water company had very kindly left us a pack outside the front door too, so we were now up to sixty litres. No need to panic now.

Now, as you may know (see ‘Fit for the job‘, ‘Mid-life crisis management‘, ‘Out of the blue‘ and ‘A team effort‘), Saturday means hockey for the Oz family (as does Sunday morning, Monday night, the occasional Wednesday night and Sunday afternoon and most Friday evenings!). My older son and I were playing away from home, so at the appropriate time we loaded our kit into the car and were about to set off when we spotted another four packs of bottled water on the drive, again left by the water company. We were now up to a grand total of a hundred and eight litres.

We drove through the pouring rain, played hockey in the pouring (and freezing) rain, lost heavily and left the pitch thoroughly wet and miserable – and I managed to pull a hamstring, just to add injury to insult (see also ‘Fit for nothing‘). We then made the mistake of following one of our team-mates who claimed to know the way from the pitch to the opposition’s clubhouse (a journey of less than ten minutes). He got us hopelessly lost and we arrived forty-five minutes later just in time to see the last of the food disappear. So we had a quick drink and drove home through the pouring rain. The rain continued unabated overnight.

By Sunday morning it had finally stopped raining, which was excellent news as I was off to Worcester to be assessed. Because I clearly don’t do enough hockey-related stuff, I’ve been doing a coaching course and Sunday was assessment day. I left in plenty of time, so as not to be late for my big day. Or so I thought. 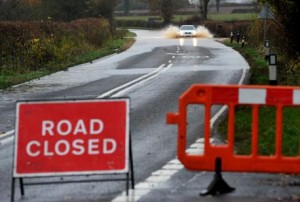 On the way I encountered three separate road closures due to flooding, the last of which I drove through anyway as I’d almost run out of options. That wasn’t as fool-hardy as it might seem as it wasn’t actually all that deep and I have, to my great shame, a large, gas-guzzling four-wheel drive monster-truck of a car, which has got me out of trouble on more than one wet and snowy occasion. I arrived (just about) in time, did my assessment (which I passed, thank you for asking) and set off back home, only to find that the small flood I’d driven through earlier was now a sizeable lake and, discretion being the better part of valour and all that, I decided not to risk it. I took a detour, only to find my route blocked by another raging torrent. This happened another twice and I was beginning to worry that I wouldn’t get home at all. I eventually did, however, whereupon Mrs Oz made me a nice cup of tea, made with bottled water, of course. We took Barney for a walk and returned – yes, you’ve guessed it – to find another four packs of water on the drive!

And so to the business continuity bit.

Firstly, the experience reminded me of the importance of that emergency pack and, more specifically, of the importance of checking it every now and then and keeping the contents up to date. I often advise my clients to do so with their emergency supplies or their “battle boxes” and I feel suitably chastened by my own shortcomings in this regard.

Secondly, I have to say that the communications from the water company were excellent. Notwithstanding the fact that I’d prefer them to have told me before I inadvertently acted against their advice, they’ve kept us informed throughout the event with regular “dear householder” letters, containing just the right balance of concern, action and reassurance (see also ‘Take CARE‘). And they’ve done a really good job of maintaining supplies to their customers – a little too good if anything – with a fleet of (you’ll probably find this hard to imagine – courteous) white van men cruising the area and quietly and efficiently delivering bottles to us every time we turn our backs. 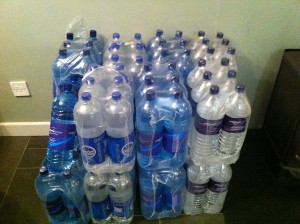 It’s now Monday and I’ve just had a bit of a Victor Meldrew (“I don’t believe it”) moment! They’ve only gone and delivered us another four packs! Now I don’t know about you, but even with my recently increased daily water intake and the fact that there are four adult-sized people plus one small but thirsty spaniel living at Chez Oz, and even using bottled water for cooking and teeth-cleaning and, possibly, ice-making (see ‘An icy crisis‘), unless I start washing the cars with it too it’s going to take us a while to get through the hundred and eighty-four litres we still have left as I write this. I suppose I could use it to water the garden in the spring when the inevitable drought and hosepipe ban is once more upon us. At least it’ll be a while before I have to replenish our emergency supplies.

Glass of water anyone?