On Saturday evening I couldn’t wait to get my trousers off. In fact Mrs Oz helped me, so as not to delay the process unduly. This was nothing to do with the fact that it was my wedding anniversary or any associated promise, I hasten to add.

It was our 22nd anniversary, which only goes to prove that a) I’m a delight to live with or b) Mrs Oz has the patience of a saint and/or the skin of a rhino. The latter of which, I’d like to point out, she definitely hasn’t. In fact she has lovely skin, which I just thought I’d make absolutely clear. Because its true. Not because Mrs Oz proof reads my blogs or anything like that.

Anyway, back to my trouser removal motive, which was perfectly innocent and nothing for you to be concerned about, as I shall explain.

I spent the afternoon chainsawing (see ‘Boys’ toys‘). Not the most common, or romantic, of anniversary activities, I admit, but we had been out for a very pleasant walk in the woods in the morning and there was a large pile of timber in our own tiny bit of woodland that needed logging for firewood. I’d been meaning to do it for months but just hadn’t got around to it. With cooler nights not that far away, and rain forecast for the rest of the week, I couldn’t put it off too much longer. So, after much agonising and soul-searching, out came the chainsaw.

I hadn’t used it for some time so I thought it prudent to have a quick read of my course notes and a whizz through the user manual to refresh my memory. Then, because I hadn’t done so after the last time I used it, I had to give it a bit of a clean and sharpen the chain, which delayed the actual chainsawing for a couple of hours. Finally, I got dressed up for the job. 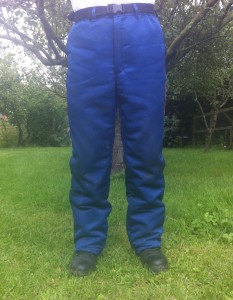 I suspect that most of you won’t be familiar with chainsaw trousers. They’re designed to protect the user from accidentally cutting his or her leg(s) off. To this end, they’re lined with Kevlar, which, in the event of contact with a moving chain, wraps around the saw’s drive sprocket, thus halting the chain and limiting the damage to the operative’s lower limbs. The optimum number of legs for most of the pastimes I indulge in being two, I’m more than happy to wear said trousers, despite the fact that they’re not the most comfortable item of clothing ever invented.

In fact, chainsaw trousers are almost certainly the heaviest trousers  in the world. And the hottest, particularly when the sun decides to make a rare and unexpected appearance just as you start work. It’s like having your own personal sauna in your trousers. And after a few hours of strenuous activity I was only too ready to get out of them. Which brings me back to my opening line.

“And the link to business continuity?”, I hear you ask.

Firstly, chainsaw trousers are not only a good idea if you want to finish the job with the same number of legs that you started it with, they’re a legal requirement – at least if you want to comply with UK health and safety legislation. Strangely, chainsaw jackets aren’t and it’s perfectly legal to use a chainsaw wearing just a t-shirt. Whilst, admittedly, it’s more difficult to lop off an arm than a leg, or to perform unscheduled major surgery on your upper body, it’s far from impossible. But most chainsaw users only wear what they absolutely have to wear to tick the compliance box, rather than what common sense would suggest is a better bet.

Similarly, I come across lots of organisations that do the bare minimum from a business continuity point of view. They take the same ‘tick the box’ approach to meet either legal, regulatory or customer requirements, rather than doing everything they know they really ought to do to make them more resilient. In both cases it’s more expensive and more hassle to do the latter. And it often takes a near miss, or worse, to convince them to do what they really should have done all along.

Secondly, my chainsawing capability was somewhat compromised by a lack of practice. I’d pretty much forgotten how it worked and what I was supposed to do with it. Proverbially, as well as quite literally, I hadn’t kept the saw sharp. Need I say more?

And so to our anniversary evening. We had a lovely meal, cooked for us by one of my sons, which, in itself was a rare treat, and a few glasses of prosecco (after all, champagne’s for posh people and the big anniversaries – and anyway we rather like prosecco (see ‘Bitten to death in Venice‘)). And then? You might be relieved to hear that we fell asleep in front of the telly! And who says romance is dead?