I’ve not long returned from a trip to the supermarket. Not my favourite activity at the best of times, I have to say, but I usually manage to get through it without having to have an argument. Sadly, not today.

It all went remarkably well to start with. There were no herds of pensioners standing four-deep in the aisles talking in loud voices about their latest ailments; no spotty Herberts with trolleys full of cardboard boxes forgetting that bit about customers; no screaming infants being dragged along by a red-faced parent; no Mexican stand-offs in aisles narrowed by special offer displays or abandoned trollies. No, none of the usual obstructions or irritations of supermarket shopping to contend with. It was almost (though not quite) a pleasure. Then I got to the checkout. 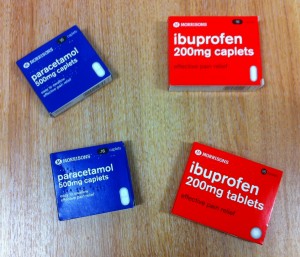 Among the items in my trolley were some headache tablets – two boxes (of sixteen) paracetamol and two boxes (of sixteen) ibuprofen to be precise. We’d completely run out at home so I didn’t think that was a particularly unreasonable amount to buy. A box of each for the bathroom cabinet, one for Mrs Oz’s handbag and one for my hockey kit bag – ibuprofen being my drug of choice on hockey days. Apparently, though, the thought police have different ideas, as I was about to find out.

“I can’t sell you those”, said the girl on the checkout. I politely enquired why this might be. “Because you’ve got too many” she replied. “Too many for what?” I asked, feeling a faint stirring of my hackles. “Too many in one go”, she said.

“It’s ok I’m not going to take them all in one go, just as I’m not going to drink all of those in one go” I said, pointing at the four bottles of wine that she’d just blipped through the scanner, so was obviously more than happy to sell me. “I know, but I can only sell you two at a time” she replied. “Well, if that’s the case, after I’ve finished here I’m going to walk over to the pharmacy just behind this checkout and buy two more boxes”, I said, “but at that point I’ll be quite cross and will probably have to have a chat with the store manager.”

Then, in what I think was intended as an act of helpfulness on her part, she said “you can pay for two of the boxes separately”. Unfortunately, all it achieved was to awaken the until-now-dormant Mr Stroppy that lurks just below the surface. “You are joking?” I asked. But no, she was deadly serious. I remained polite and manfully resisted the urge to bludgeon her with my unripe pineapple (let’s not even go down the route of supermarket fruit at this juncture), in my view as lethal a weapon as any of my shopping in the wrong hands – particularly those of someone denied his ibuprofen fix.

But I did feel duty bound to enquire how, exactly, this cunning system would prevent  a suicidal maniac, hell-bent on ending it all in a frenzy of anti-inflammatories from obtaining the wherewithal to do so. I did explain that I realised it wasn’t her fault, but that the whole thing was quite ridiculous. I briefly toyed with the idea of getting her to call the manager over but concluded that a) it probably wouldn’t get me anywhere and b) it would probably irritate the chap behind me in the queue, who was starting to mumble and shuffle from side to side – a sure sign of a fellow grumpy. So I bit my tongue, paid once for the bulk of my shopping then paid again for two packets of the offending drugs. As a parting shot I pointed out this was the same result as if she’d just served me in the first place but that the store had managed to cheese off two of its customers (me and the shuffling, mumbling bloke she’d be serving next) for no sensible reason.

When I got home Mrs Oz explained to me that it’s the law, so I suppose I was quite lucky not to be arrested and banged-up for my attempted crime, ignorance being no defence and all that. But if that’s the case what on earth is the world coming to? If there really are that many people out there who are daft enough to top themselves using paracetamol and too stupid to buy them in more than one transaction then I think Darwin’s law of natural selection is more than adequate to sort that out! If we really want to stop people damaging themselves or other people, let’s maybe have a law limiting the amount of crisps or ready meals you can buy in one go, or a law banning alco-pops, or or maybe actually enforce the one about not driving with your mobile ‘phone in your ear.

I don’t know about you but I find the near-total lack of any common sense in the world these days incredibly frustrating. In fact, common sense is, in my view, spectacularly badly named.

Now, despite what some ‘experts’ would have you believe, I reckon that business continuity management is about 60% common sense. The rest of it consists of a bit of process and methodology, and maybe some education. Oh, and a bit of experience doesn’t go amiss. But a very large chunk of what we, as business continuity practitioners do, boils down to good old-fashioned common sense. The problem I come across all too often, though, is that common sense in the business continuity world seems to be somewhat lacking at times. I suppose I ought to be thankful for that as, to a large extent, it keeps me in a job. But, for instance, why would you store your IT backups in the same computer room as the live systems?; or consolidate all of your manufacturing plants into one big one and put it on a fault line in a politically unstable country?; or make a large chunk of your business entirely reliant on one person?; or entrust the continuity of your business to someone with no business continuity – or business – experience? These are all things that otherwise-intelligent people do. I could go on but I’m sure you get the picture. And anyway, perhaps you’d like to employ an expensive (or, in some cases, remarkably reasonable!) consultant to point out some of the glaringly obvious business continuity issues in your business. Or you could just have a good look yourself. Go on, I dare you. And I’m willing to bet that you’ll find at least one example of a common sense bypass!

I’d just about calmed down following the unnecessary hassle of my little “computer says no” experience. Then I tried to book a dental appointment. I’ll tell you about that another time.