Warning : this blog contains bad language, violent scenes and images that some may find distressing. Particularly me and Mrs Oz!

I’m starting to get a bit racked off now. I realise and fully accept that with the amount of hockey I play and, yes, the fact that I’m not as young as I was, I’m going to pick up the odd twinge and minor injury (see “Fit for nothing“). But this really is getting to be a bit much. 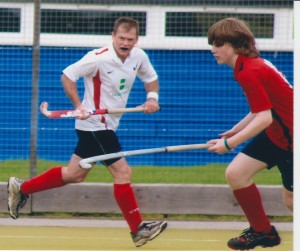 On Saturday I played in an intra-club friendly match and it was really enjoyable. At least it was until just before half-time. It started to become less so when I followed in on a shot on the opposition’s goal, knowing that their ‘keeper was going to get to the ball first but anticipating a rebound. I charged into the ‘D’ as he kicked the ball out, straight at me. My cunning plan, formulated in that split second, was to deftly stop the ball, then even more deftly dribble round the ‘keeper and, more deftly still, flick it into the net. The crowd would cheer, I’d raise an arm in celebration and my team mates would applaud me. A cracking plan, if I say so myself. The trouble was that he wellied the ball, from a distance now of about three metres, not along the ground but at knee height. I deftly failed to get my stick anywhere near it and it hit me squarely on the kneecap. Which hurt. A lot.

It’s the same kneecap that I got hit on a few weeks ago when, as I went in for a tackle, the opposition player, instead of passing the ball to any of his nearby team-mates, elected to blast it at me as hard as he could. Which, I have to say, was impressively hard. Unfortunately, I stopped being impressed sometime between the intense pain starting and hitting the ground a second or so later. I became distinctly unimpressed a few minutes after that when I tried walking, failed miserably and realised that I wasn’t going to be taking any further part in that particular match. Or the next.

It always seems to be the right knee. That’s the right knee as in not the left knee, rather than the right knee as in the correct knee. I’ve had lots of trouble with that particular knee over the years, including cortisone injections, an operation and more physio than you can shake a stick at. If it’s possible to have an unlucky knee then my right knee is just such a beast.

Anyway, back to Saturday’s match. This time the injury was comparatively minor. I remained upright and hobbled around for a bit looking forward to a half time breather (and an ice pack). However, my anticipation was rather short-lived. About three minutes later, having recovered enough to run almost properly, I sprinted gazelle-like to intercept a pass. As did one of the opposition. I’m delighted to say that I got there first. I was just congratulating myself on this when he arrived a split second later and my nose exploded! At least that’s what it felt like. We’d collided, in a scene reminiscent of those male bison you see going quite literally head-to-head, at full tilt, in those wildlife programmes on TV. Although, more precisely in our case it was forehead-to-nose, rather than head-to-head. His forehead and my nose. At full tilt. “Goodness me, that’s made my eyes water”, I thought (or words to that effect), as I made my way ground-wards.

After a while someone arrived with the first aid kit and I heard the words “is there a first aider here?”. “Yes, me”, I mumbled through the blood, snot and tears. “And if you @&#*ing come anywhere near me with that @&#*ing antiseptic wipe we’re going to fall out big-time!”. I’m not entirely sure my words were completely intelligible, which is just as well as there were ladies present, but I think he got the gist as, thankfully, he backed off.  At which point my team-mates scraped me up and packed me off to the Minor Injuries Unit at the local hospital. 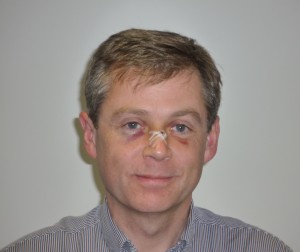 I really do dislike hearing the words “this may sting a bit”, particularly from anyone in the medical profession, as I know exactly what’s coming next. It’s not going to sting a bit, it’s going to hurt like hell! And it did. First of all the nurse administered the dreaded antiseptic wipe, then she grabbed the bridge of my nose and gave it a tweak, which apparently is the way that highly-trained medical practitioners check whether a nose is broken. Although it seemed a bit unnecessary to me, as she followed this up by saying “I don’t think it’s broken, but of course we won’t know for sure until the swelling goes down”. Now I think our nurses do a marvellous job, but…

The nurse finished patching me up and sent me on my way. By the time I got back to the club the heavy-duty painkillers had kicked in and I was feeling quite philosophical about the whole thing.

I mused on the fact that all three male Oz’s have now been the unfortunate victims of sport-related facial injuries that required hospital treatment. My older son suffered a similar collision in a hockey match a while ago (see “Out of the blue”’) and my younger son executed what I believe is known as a “face-plant” whilst skateboarding earlier this year. Rather bizarrely I found myself wondering what sort of odds I’d have got on that particular treble.

Then, possibly even more strangely, I started thinking about any business continuity connections. Perhaps it was the drugs, but I suspect it was the fact that I just can’t help myself these days. This is where my thoughts took me :

1) Stuff happens. If you play sport, you’re going to pick up an injury at some point. And if you’re in business, something is going to go horribly wrong sometime, probably when you least expect it. And no matter how high the odds might seem, improbable things do happen, sometimes more than once. So you need to think about the consequences and make whatever provisions you deem appropriate.

2) If your plans rely on individuals and those individuals are unavailable or incapacitated, you might find yourself in more trouble that you’d like. So you really ought to think about mitigating those risks by cross-training, documentation, succession planning or whatever.

So have I learned anything from this sorry experience? Will I give up playing hockey to avoid further injury? Will I $&??@#*! I might avoid playing in any more “friendly” matches though!