I’ve spent the past week hobbling about with a sore calf. Before you ask, no I haven’t branched out into veal farming or bovine veterinarianism (if, indeed, that’s a real word) – the sore calf in question is my latest hockey-related injury. 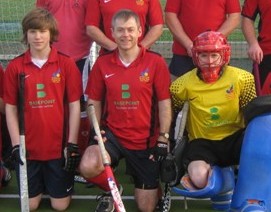 As regular readers will know, I play hockey in the winter and cricket in the summer. It gets me out of the house (a bit too often sometimes), gives me an opportunity to interact with my sons in a way that doesn’t require too much intelligent, meaningful conversation (and one that doesn’t result in too much abuse – depending, of course, on your definition of too much) and keeps me fit and healthy. At least that’s the idea.

Anyway, the calf thing happened on Sunday morning during a training session with the juniors, following a particularly strenuous senior match on Saturday afternoon. I’m not entirely sure what caused it – presumably I was attempting something overly energetic, like breaking into a gentle trot – but all of a sudden my calf muscle just sort of went ping and that was it, game over.

To be fair, I wasn’t all that surprised that something went ping as I seem to have been plagued by mishap and injury for the last couple of seasons (see below), and I’m rapidly reaching the conclusion that I’m getting too old and creaky to do something energetic two days in a row. I had, however, expected the ping to be connected with this season’s most regular affliction, the hamstring strain.

My last bout of hammy trouble occurred about three weeks ago, also during a training session, this one with the grown-ups (although I use that term loosely). Things had seemed to be going so well, too. I’d recently recovered (or so I thought) from the previous episode, thanks to a couple of particularly violent physiotherapy sessions which involved having needles stuck in the backs of my knees, the flesh being stripped from my the backs of my thighs with some kind of mediaeval torture implement – at least that’s what it felt like – and a (thankfully) failed attempt by a white-coated sadist to break my spine with his bare hands. And I thought my previous physio had issues!

I will admit that I have to take some responsibility for that particular relapse. I just overdid it, plain and simple. I’d played hockey on the previous Saturday, helped with the juniors’ training on Sunday morning and played another match on Sunday afternoon. And, because by some miracle I could still walk on Monday, I thought it was a good idea to go to senior training that evening. It wasn’t.

The trouble is, when I’m on the pitch I think I can still run around like I used to do when I was quite a lot younger. And, because my game is based on making up for my spectacular lack of talent by giving the proverbial 110%, I do tend to cover quite a bit of ground. And it does take something of a toll on an ageing and increasingly fragile body.

I guess we all like to think we’re super-human but, sadly, we’re not. It doesn’t matter how young and fit (or in my case how slightly-less-young and not-quite-so-fit) we are, or consider ourselves to be, if we push ourselves too hard someting eventually has to give. For me, the time that I find out I’m not super-human is during, and for a couple of days after, a hockey match. For others, it’s when they hit the proverbial wall having gone on for far too long in difficult or stressful conditions. Like those that often prevail when managing a crisis, for instance.

Most of us have stories about how we did 24/36/48/72 (delete as applicable) hours at a stretch. What those stories usually don’t include, however, is an honest assessment of how effective we were by the end of it. Not very is almost certainly the answer. In some cases, in all probability, next to useless. But very few of us would readily admit that.

However, in a crisis management or business recovery context, it’s important that we do admit it and that we recognise it as a serious issue. One that needs to be considered both in our planning efforts and when we have to use our plans in anger. Because if we push ourselves too hard, for too long, or extend too far beyond our capabilities, just as in the case of the creaky old hockey player, we will eventually break.

So we need to nominate alternates or deputies; we need to brief and train them; and we need to exercise them – just like we do with our primary team members. And, if and when we end up invoking our plans, we need to call on them and not try to be the super-humans that we’re really not.

Back to my own personal lack of super-human-ness for a moment. If you’re interested, the list of injuries (to me, not the whole team!) in last couple of seasons of playing hockey and cricket includes :

I think that’s everything – at least for now.

Let me just remind myself why I play these sports – oh yes, that’s right, to keep fit!

Related articles : ‘It’s just not cricket‘, ‘A toe-curling tale‘, ‘A team effort‘, ‘Mid-life crisis management‘ and ‘Fit for the job?‘