A night at the opera

I had a fabulous weekend, thank you for asking. It wasn’t the usual, run-of-the-mill weekend of dog walking, cricketing, operating the Osborne taxi service or household chores, enjoyable as (most of) those things are, because this weekend Mrs Oz and I jetted off to Verona. To the opera, no less. I must stress that we don’t make a habit of this sort of thing. This was Mrs Oz’s birthday present for this year. I won’t tell you which one but suffice it to say it was a special one – one with a zero on the end.

We’d never been to the opera before so we thought it was about time we let a bit of culture into our lives. Not that we’re total strangers to culture, you understand. We went to the ballet in Rome for her previous special-birthday-with-a-zero-on-the-end. We had tried to go to the opera then, but it all went a bit pear-shaped and the tickets never materialised, so we ended up at the ballet instead. That’s another story but I have to tell you, at the risk of you thinking me a heathen, it was one of the funniest things I’ve ever seen. It wasn’t supposed to be, obviously. But the trouble was, the dancers weren’t actually that good and, not to put too fine a point on it, the prima ballerina was, and this is the kindest way I can put it, a tad past her prime. It wasn’t helped by the ‘eclectic mix’ of dances either, the best of which we dubbed ‘Pocahontas meets the Smurfs’ or ‘let’s see how many different ways we can walk around in a circle in very strange costumes’. But I digress, just for a change.

Back to the opera – Aida, incidentally. I have to admit that I wasn’t entirely sure that I’d enjoy it that much, never having been before. I do enjoy a good show and I like quite a wide range of music, although most of it is more recent than your average opera and I have to confess that I do find some sopranos just a teeny bit screechy for my sensitive disposition.

But it was brilliant. In fact the whole weekend was brilliant – from the scrummy food and excellent wines to the relaxed atmosphere; from the friendliness of pretty much everyone we met and a fantastic show in the open-air Roman amphitheatre to the lovely weather (for the most part, anyway – I’ll come onto that in a bit ) – from the moment we checked in at the hotel to the moment we got on the bus to the airport we had an utterly splendid time.

The only slight downer was that, having been gloriously sunny on the Friday afternoon and Saturday morning, Mr Murphy and his law came to the fore and it clouded over on Saturday afternoon. And, worse still, it decided to rain intermittently during the opera itself, which isn’t ideal when the theatre doesn’t have a roof. 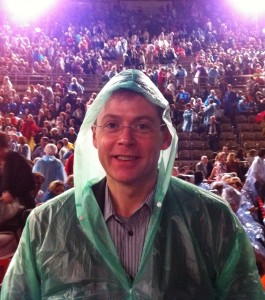 When it rains on the opera in Verona, the opera stops. The singers and the orchestra just stop what they’re doing, give a little wave and exit stage right. Their excuse is that they don’t want the costumes or instruments to get damaged, which is fair enough, but why they can’t just put up a brolly or pop on a plastic mac like the rest of us is beyond me!

This happened three times and each time the show was paused until the rain stopped. Then a small army of people scurried about for a while with mops and buckets and cloths and a special machine, drying the stage before things restarted.

During one of these unplanned intermissions, in a Cliff-Richard-at-Wimbledon-esque moment, a choir who happened to be in the audience put on an impromptu performance for us (that’s us and the 13,986 other spectators, as opposed to just us, obviously). They were absolutely fantastic, and it was one of those magical moments in life that just happens completely unexpectedly and proves that many clouds do, indeed, have a silver lining.

Aida and Radames finally met their fate at 2am (this being one occasion when it isn’t over ’til the fat lady stops singing), milked the applause for a while and left the stage for the last time. Following which we went for dinner! Following which the heavens opened and it absolutely lashed it down. Following which we finally got back to the hotel at about 4am, slightly damp around the edges but very happy.

And so to the tenuous link to business continuity. It struck me that there were two types of plan in operation that night. There was the opera itself – finely crafted, highly detailed and followed pretty much to the letter. Then there was the cleanup operation, which was somewhat less scripted and more flexible, albeit those involved knew what they had to do. In both cases the players knew their parts and had obviously rehearsed them well but the two situations were prepared for somewhat differently.

And it struck me that there’s something of a parallel to our business continuity plans, insofar as there are elements that need to be fairly rigid and scripted, such as the IT recovery plans, but there are also elements that need a degree of flexibility, such as the incident management plans, which rely more on the capabilities of those involved and the toolkit of resources at their disposal than a rigid, prescriptive, detailed procedure that can’t be deviated from.

There was also the observation that, for all our careful planning and preparation, good old Mr Murphy is always just around the corner, waiting to rain on our parade – or, in our case, our opera.