It’s finally caught up with me. I tried to ignore it and hoped it would go away but whatever I did it was destined to happen anyway. I was utterly powerless to prevent it. Resistance was futile. In the end I just had to take it on the chin. 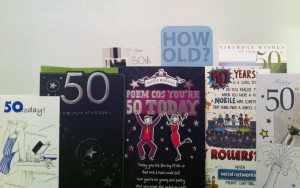 I’m talking about my recent birthday. One with a zero at the end. More to the point, one with a five at the front.  Yes, “the big five-o” as a number of people seemed to take great pleasure in telling me, and as highlighted by several hilarious cards I received, most with a large “50” on the front. Or, as my two delightful teenagers so sensitively put it, the official start of my old age. Actually, that’s not quite the words they used but I wouldn’t want to offend your sensibilities – not that they showed any such hesitation in offending mine, bless them.

You may have read my previous ramblings on the various elements of my mid-life crisis (see ‘Mid-life crisis management‘, ‘Boys’ toys‘ and ‘Fit for nothing‘). When I think about it, though, being forty-something didn’t really bother me that much. For some strange reason, however, the thought of being fifty did. But thankfully, now that it’s here I find it’s not that bad after all. Admittedly bits of me hurt for ages after I do anything remotely strenuous and I occasionally find the odd curiously long, and often grey, hair sprouting where they didn’t sprout in my younger days (just to clarify, that’s ears, nostrils and eyebrows, so there’s no need to look so alarmed), but these are hardly new phenomena and they certainly didn’t arrive with fifty-hood.

So why go on about it then? Well firstly, I know what a caring and thoughtful group of people my readers are and I thought I might elicit a modicum of sympathy to counter the general abuse that my fiftieth birthday seemed to evoke from other quarters. Secondly, you can blame my nephew, who expressed some doubt that I’d be able to work said birthday into my blog. And I do like a challenge.

The other challenge, of course, is to somehow work a business continuity-related observation into it. So here goes…

Some things are going to happen whether we like it or not. No matter how much risk mitigating and plan writing and navel-gazing we do (or not, as the case may be), we can’t prevent everything that could possibly go wrong from doing so. It’s possible that we might see it coming. Or it might hit us without warning. Either way, we sometimes have to deal with stuff that we’d prefer not to have to deal with. And it’s much easier to do that if we’re prepared for it, rather than burying our heads in the sand and hoping it’ll never happen. From a business continuity point of view that means planning and preparing, training, rehearsing and testing, to ensure that when we do have to deal with stuff, we have the capability to do so effectively.

Whatever I did, my birthday was going to happen, like it or not, and in the end I just had to deal with it. And I’m pleased to report that I’m over it now. In fact, I came up with a fantastic idea to help with the healing process. Genius, if I say so myself. It even inspired the title of this blog. Sunday was my team’s first cricket match of the season and I thought a really good way to exorcise my demons would be to go out and score a quick fifty, thus proving (particularly to my sons) that I’m not past it after all. Life in the old dog yet, and all that. And guess what. Nah, I scored two!

Perhaps it’s time for the pipe and slippers after all.

Andy is the author of three books ‘Practical Business Continuity Management‘, ‘Risk Management Simplified‘ and ‘Risk Management Made Easy‘, as well as his popular blogs and ‘Tips of the Month’, all of which aim to demystify the subjects of business continuity and risk management and make them more accessible to people who live in the real world.

2 responses to “A nifty fifty?”