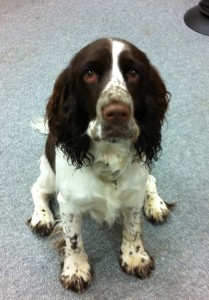 For those of you who aren’t familiar with Barney, he’s the fifth member of the Oz household – a two-and-a-bit-year-old Field Spaniel (not a Springer!). And for those of you who’ve read about him previously and have been missing him, he’s back. Not that he ever really went away. He just hasn’t appeared much lately because he’s generally been pretty well behaved (for a spaniel). But he’s recently been up to his old tricks again.

You may remember me writing in a previous blog (‘A spectacular disaster‘) about Barney eating my spec’s and the fun and games I had as a result. Well, as it turns out it wasn’t a one-off and it seems he’s acquired a bit of a penchant for the activity.

I have to say I’ve been particularly careful about where I leave my spec’s since the previous episode, prevention being better than cure and all that – particularly as he did a similar thing to a pair of Mrs Oz’s reading glasses shortly afterwards. Thankfully, that was a pair of Pound Shop specials so, apart from the inconvenience, they were easily and cheaply replaced. In any case, Mrs Oz has several pairs, stashed in various strategic locations, so that she stands a chance of actually finding one when she wants to read something. I, on the other hand, can generally remember where I left mine. My own memory lapses include where I left my car or house keys, people’s names, facts and figures, dental appointments, what I’ve gone upstairs/downstairs/into a particular room for and what I did yesterday but not, for some reason, where I put my spec’s when I’m not wearing them – probably because that’s almost always in the same place. Which is a good thing, seeing as I possess but a single pair.

And, incidentally, I’ve never put my mobile ‘phone in the fridge. I just thought I’d mention that.

Anyway, on this occasion I obviously had a lapse of concentration, or common sense, or both, and the system broke down. I left my spec’s within Barney’s reach and the temptation was obviously too much for him. I spotted him before he actually devoured them but, sadly, not before he’d seriously maimed them.

“Never mind”, I thought. Notwithstanding the almost certain frustrating conversation with a call centre operative in some far-flung location (who would doubtless be very pleasant and ask how I was and what plans I had for the weekend and whether they could help me in any other way today, whilst singularly failing to grasp what on earth I was on about Barney-and-mangled-spec’s-wise) I could always claim on the insurance again. But that’s where I was wrong. Because I hadn’t read the small print. I’m pretty sure I asked Mrs Oz to read it but presumably she couldn’t find her glasses. The small print, that is, which said that, whilst dog-related destruction was a valid reason for a claim, the insurance that I took out when I bought my spec’s actually only lasted a year. And that year ran from the time I bought the original pair, not the date of the replacement. Bugger!

So I ended up forking out another two hundred and something quid, just because of a teeny-weeny little mistake that anyone could have made, actually. And I was spec’s-less again for well over a week because the frames I wanted weren’t in stock (which, incidentally, is pretty much the same thing I get whenever I try to buy anything, from anywhere, ever – in fact don’t get me started on shopping for clothes!). But that’s OK, because I only need my spec’s for seeing, it’s not like they’re important or anything.

I suppose you’re wondering what words of business continuity wisdom I have for you on this occasion. Well, this time my observations are more about risk management – or, in this case, the lack of it. I was only too aware of the risk, although I thought it might have diminished given that Barney’s now almost a grown-up – after all, he’s two-and-a-bit now, which is about as grown-up as a spaniel is ever likely to be. And, in any case, I’d implemented appropriate risk mitigation measures, which worked perfectly well – until the day they didn’t because I didn’t follow the process. And in any case, I had another layer of defence in my insurance policy – except I hadn’t understood that properly and had made a hopelessly invalid assumption.

All of which I see regularly in lots of organisations (without the spec’s or the spaniel, obviously). They compromise their resilience by not following processes designed to protect them; they don’t monitor their risks and the associated mitigation measures to see if anything’s changed; and they make similarly ill-judged assumptions about any number of things, not least what their insurance covers – and, just as importantly, what it doesn’t.

Now, in fairness, my little incident, whilst inconvenient, thankfully wasn’t that serious, when all’s said and done. But I really should have known better. And it’s scant consolation to know that I’m not alone in this regard.