I started to write this blog some time ago, but I didn’t get around to posting it, or finishing it for that matter, because it was overtaken by my blog about some other watery exploits. Which, as it happens, also scuppered the use of my intended title (see “Water, water everywhere“). But I’ve just bumped into it again, so I thought I’d dust it down and finish it off. It was quite timely, really, for reasons that I’ll explain in a moment. Anyway, here we go…

A while ago my therapist told me that I need to drink more. To be honest, this came as something of a surprise as I thought I’d been doing pretty well in the drinking more stakes. Then she told me that she meant more water. I feel that, at this juncture, I should explain that the therapist in question is a sports massage therapist and not some sort of shrink. I’m not quite at that point, I’m pleased to say, although I suspect there are one or two amongst my nearest and dearest who suspect it’s not all that far off.

Anyway, back to the water thing. “How much more?”, I asked her, to which she asked how much I was currently drinking. I pointed out that I prefer to take my water in the form of tea or coffee (see “A nice cup of tea“) – carefully omitting to tell her that my favourite intake method is frozen into cubes and surrounded by gin and tonic – to which she said disapprovingly “so that’ll be none then”. She then proceeded to tell me that I should be aiming for two litres a day!

Incidentally, this same therapist thinks it’s acceptable practice to use her elbows to get really deep into my poor innocent muscles because “it would make my thumbs ache if I just used them”. In fact I’m starting to think I should consider becoming a politician seeing as I’ve now met one of the qualifying criteria – that of paying to have pain inflicted on me by a woman in a uniform. I just need to work out how to fiddle my expenses properly and practice never giving a straight answer to a question and I’m pretty much there.

But I digress. Not one to resist a challenge, I decided to give it a go. And for a while I did pretty well. I took Madame de Sade’s advice and dutifully drank my way through bottle after bottle of the wretched stuff. And, so that she wouldn’t feel left out, I press-ganged Mrs Oz into doing the same. In fairness, she’s pretty good at it anyway, her daily water intake already massively exceeding mine (which, apparently, was none). 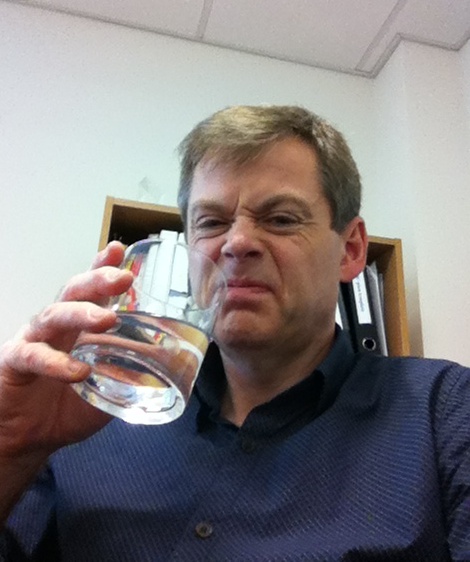 The upshot was that I gave it a good go for a few weeks, but then I unintentionally stumbled onto the slippery slope and lapsed into my previous water-free existence – apart from the six or seven cups of tea and coffee a day, which I still contend must count for something, whatever the evil woman with the pointy elbows says.

But just recently I started thinking that I should have another go, which coincided, within a few days at least, with coming across my unfinished blog. So here we are.

And so to the business continuity bit – I suppose I ought to include one, seeing as you’re probably expecting one to be buried in here somewhere.

Firstly, the implementation of a full-blown business continuity management programme from a standing start can seem a bit scary and difficult. So rather than setting unrealistic expectations, it’s better to set sensible, achievable targets and build towards our ultimate goal.

Secondly, despite starting with good intentions, it can be all too easy to drift into bad habits and not carry out the regular, ongoing activities essential to keeping things on track – such as periodic reviews and updates – particularly if we see these as onerous or outside of our normal activities.

So here I am in the office with my unfeasibly large bottle of water, trying desperately to get somewhere near my two litre target for today and being pretty sure that I’m going to fail miserably. And, worse still, knowing I’m going to spend more time going to and from the little boys’ room than sitting at my desk. Apparently it’s doing me good, but you could have fooled me. What I really want is a nice cup of tea.

Related articles : “How do you eat an elephant?” ; “A moving target”

STOP PRESS : A big thank you to everyone who voted for me in CIR business continuity awards.  We have to wait now ’til 30th May before we find out, so fingers crossed. Rest assured you’ll be among the first to know. Andy