One flew over the chicken’s nest

I started writing this blog a few weeks ago, when the level of Coronavirus-related selfishness and stupidity was nearing epic proportions. It turned into a fairly substantial rant, even by my standards, on such topics as the ridiculous level of panic buying, the scumbag profiteers selling hand sanitiser, toilet rolls and other ill-gotten gains at exorbitant prices, certain so-called leaders demonstrating their total lack of a grip on reality, thinly-veiled (in some cases not even thinly-veiled) sales pitches masquerading as offers of help, and the morons to whom social distancing translated as “let’s all go to the pub”, or cram together like sardines on a crowded beach or in a park, or have a barbecue or karaoke party at home, but with twenty or thirty of our friends and relatives.

After writing several scorn-filled paragraphs, it struck me that there was more than enough anger and frustration around without me adding to it. So, on reflection and, having listened to the sage advice of my mindfulness app, which talked me soothingly through a couple of sessions of deep breathing, focusing on my toes and thinking happy thoughts, I decided to take a slightly lighter and less rage-fuelled direction and tell you instead about my own panic-buying activities. So, while some people, having stripped the shops of toilet rolls, flour and pasta, turned their panic-buying attention to eggs, the residents of Chez Oz took a slightly different tack and panic-bought some chickens.

As a consummate contingency planning professional, like many others of my ilk who inhabit a slightly pessimistic and doom-laden world where the end is pretty-much always potentially nigh, my family already had a small emergency cache of canned and dried food and other important items, which I encourage us to maintain, just in case. And yes, that includes a couple of packs of toilet rolls, although not twenty or fifty or two hundred as some people clearly felt they needed to have on hand (….and relax). An important point here is that I didn’t rush out and panic-buy these items after the event but bought them a while ago, over a relatively long period, when the world was less troubled and they were readily available. In other words, I did my panic-buying calmly and rationally, a bit at a time and well in advance.

I should, perhaps, explain that we’d been meaning to get some hens for quite some time. As some of you will know, we’ve kept a few for a number of years but haven’t had any for a while now. Not since the second tragedy in the menagerie (which went unreported blog-wise, unlike the first – see ‘Murder most fowl’), when we lost the lot in one fell swoop. The dwindling availability of eggs in the shops and the impending end of the world as we know it just sort of gave us a little nudge to get them sooner rather than later. So Mrs Oz tracked down a local(ish) purveyor of hens and dashed off to buy some before too many other people had the same idea and cleared the shelves – or, I suppose, more accurately, the perches. 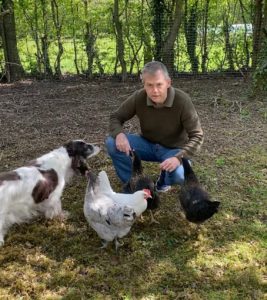 The trouble was, we then had to do a few little maintenance jobs that we’d previously put off doing on the grounds that they could wait until we actually needed to do them. And now we did actually, and rather urgently, need to do them. So we spent the weekend fixing the dilapidated chicken coop, hacking down and pulling up overgrown grass and weeds, pruning trees and hedging, reinforcing the section of fencing that the fox had previously found a way through and upgrading the electric fence system to prevent future infiltration by those with murderous intent. The latter activity necessitated the panic-buying of a new electric fence energiser (for the uninitiated that’s the bit of kit that creates the electrical pulse), the old one having given up the ghost, and a new battery. I also had to invest in a new drill, followed, a couple of weeks later, by a new battery charger as, when I came to use them I discovered that the old ones had both stopped working. So our quest for our own egg supply ended up costing me over five hundred quid.

The end result, however, was a tidy, secure enclosure and coop that we were confident no fox – at least one without supernatural powers, which, in fairness, we don’t see many of round our way – could possibly break into.

Unfortunately, we hadn’t reckoned on any of the hens harbouring thoughts of escape, so when we wandered up the garden at lunchtime recently, it came as something of a shock that one of them was missing. There was no evidence of fox infiltration (supernatural or otherwise) – no signs of digging, an absence of scattered feathers or amputated body parts that had been the give-away on the last occasion, and the remaining chucks seemed perfectly content, calmly going about the business of scratching around for the stuff that chucks scratch around for.

After much searching and head-scratching we concluded that she must, somehow, have got over the fence, perhaps via a series of hops up into one of the fruit trees, followed by what must have been a death-defying leap to freedom. Either that or she’d constructed a glider out of the old bits of coop that I hadn’t yet removed from the area. 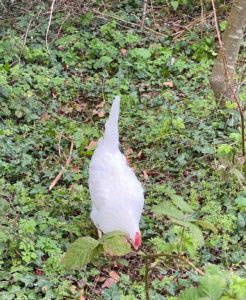 We searched the garden, but drew a blank, so we checked the field behind and spotted her in the undergrowth on the edge of the wood (see ‘The wood from the trees‘). We spent the next two hours trying to catch her, a large proportion of which I spent hacking through the tangle of brambles and briars that had taken over that particular part of my little woodland paradise – another maintenance job that we hadn’t quite got around to. In the absence of a machete or a supply of napalm, I manfully secateured my way through, stabbed and slashed by thorns at every turn, but every time I got anywhere near she dodged my advances and headed into ever-deeper jungle.

At one point, my phone rang but, as I was a tad occupied with other matters and there isn’t an “I can’t speak now as I’m pursuing a chicken through dense woodland” option, I ignored it and carried on with the job at hand. When I called my client back later, I thought it best not to mention the reason for not answering, on the grounds that I’d quite like to continue doing business with them in the future. I’m guessing the proverbial cat might be out of the proverbial bag now, in which case I can only hope for a modicum of understanding.

Anyway, we eventually managed, somehow, to shepherd the errant bird back into the garden – despite the best efforts of Barney (see ‘It’s about time (2)‘), who ably demonstrated, as if proof were needed, that not only is he not a Springer Spaniel (see ‘Not what it seems‘) but he’s also not sheepdog material – where the game continued for another twenty minutes or so. Finally, exhausted, torn to ribbons and about a millimetre from the end of my tether, I admitted defeat and returned, bloodied and battered, to my desk, extracting thorns from my scalp as I went and muttering that “she can *#%&@ stay out all *#%&@ night and the fox is *#%&@ welcome to her!”

I eventually calmed down and we had another go. To cut an equally long story considerably shorter, we finally managed to trap her and return her to the previously-considered maximum security facility, immediately after which we clipped her wings, along with those of her fellow inmates. Any poultry keeper worth their salt will confirm that this is how you stop chickens from climbing trees. Or you can lock them in a big smelly shed and never let them out, but probably best not to get me started on that topic. To be on the safe side, though, next week we’re planning to slash and burn the orchard, raise the fence by several metres and install observation towers and searchlights.

As you’ll know, unless you’re a new reader (in which case, welcome, and I apologise profusely if you were expecting some kind of intellectual insight or ‘thought leadership’ here, but I hope you’ll come back anyway) at this point I usually include some kind of tenuous link to one or more business continuity-related issues. So here it is…

Given the current situation, you may think it a tad indelicate of me (though not, I feel, as indelicate as some of the aforementioned veil-deficient, cynical plugs for often totally irrelevant products or services) to talk about the importance of identifying and plugging holes in strategies and plans before the event. But I’m going to stick my neck out and do so anyway. Because, having spoken with a number of people, it’s clear to me that many organisations had to make herculean efforts to get their business continuity strategies and plans to work effectively, as they hadn’t yet plugged some of the gaps that they knew were there and/or had made incorrect assumptions that hadn’t been validated. That said, those efforts, particularly the heroics of several IT departments, did, in most cases, enable more widespread home working than had been planned for to happen, at least to some degree.

So I think it’s really important that we don’t neglect our post-incident reviews, as it’s crucial to capture the lessons learned – which I’m pretty sure we will all have – and any follow-up actions, to ensure things work better next time. Unfortunately, there’s almost certain to be a next time, whether it’s a recurrence of COVID-19, something similar, or something else entirely. 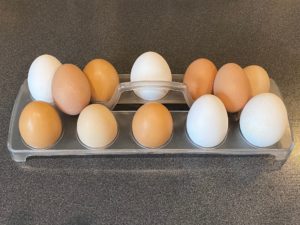 As I write, just over five weeks after we bought them, all six chickens are, I’m pleased to report, still alive, still in custody and all are finally laying, albeit a couple of them somewhat sporadically. Presumably, one of the slackers is still suffering from the stress of being chased through brambles by a cursing madman armed with a pair of secateurs. Either that or she’s too busy plotting her next escape attempt to worry about the business of egg production. I haven’t kept count but I reckon we’ve had a grand total of thirty-something eggs so far, which, by my reckoning comes in at somewhere between ten and fifteen pounds per egg. And, to cap it all, eggs still seem to be freely available in the shops!

Chickens and eggs aside, I sincerely hope you’re all coping with the difficult and challenging situation that we find ourselves in and that you and yours are staying safe and well.

2 responses to “One flew over the chicken’s nest”