I can’t believe it’s already more than a month since the Easter weekend, the subject of this blog. As so often happens, I started writing it shortly after the event, but then other priorities conspired to prevent, or at least delay, its completion. Still, here it is at last, better late than never. 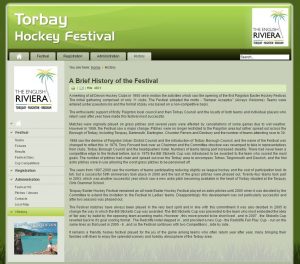 The Osbornes spent a very enjoyable weekend in Devon – Paignton, to be precise – at a hockey festival. My sons and I were invited to play for a team called the Oddfellows just over five years ago and an Osborne contingent has been going ever since.

Our plan this year was to leave early on the Friday morning, in order to miss the bank holiday traffic and ensure we were there in good time for the first match.

Our agreed time of departure was, and I quote, “ideally 06:45 but no later than 7 o’clock”, to which I’d just like to state for the record, everyone had agreed.

Things didn’t start terribly well. Mrs Oz and I, being grown-ups, had thought things through and packed the night before. Not so our offspring, whose night-before packing amounted to getting the suitcases out of the loft (which, incidentally, I did) and absolutely nothing else. So we had ‘a bit of a chat’ about it and I was assured that we’d be ready to leave at the agreed time.

On Friday morning, whilst I was doing useful and productive stuff, everyone else spent their time showering and preening themselves, the end result of which was that my shower, when I finally got it, was freezing. This prompted a few choice words, which, whilst totally justified in my opinion, seemed to upset Mrs Oz even more than the ice-cold shower upset me. As you might imagine, everyone was now in just the right mood to spend three hours plus together in a confined space. There was some other stuff, the details of which I won’t bore you with, that confirmed that young people have absolutely no concept of time (as if I didn’t know that already), and we finally hit the road at 7:25.

Because there were five of us (four Oz’s plus our lodger – see ‘Snow bother‘), and a mountain of luggage – casual daytime clobber, suits and posh frocks for the evenings and a shed-load of hockey kit, including a goalkeeper’s kit bag, which, for the uninitiated is about the size of a small village – we had to take two cars. So we took mine and number two son’s. Which was fine – at least at this point.

To cut a long story short, we arrived in Paignton without serious mishap, in time for our first game. Which we promptly lost.

I won’t trouble you with the details of the hockey, other than to say we played six matches in four days (of which we won 2, drew 2 and lost 2) and that I ended up playing far more than I’d intended, as a) I’m too old and creaky nowadays to put my body through that level of punishment, b) I was still recovering from a serious case of man-flu that hit me pretty much the second I got home from my trip to America (See ‘Viva Las Vegas‘ parts 1, 2, 3 and 4) and c) surprise, surprise, I was carrying an injury, a recurrence of the calf strain that returns every now and then to remind me that I’m not as young as I used to be (see ‘Fit for nothing‘).

Despite the on-pitch trials and tribulations, a cracking weekend was had by all. But as is always the case, it was over far too quickly and we hit the road on Monday afternoon, along with about three million other people, for a slow and somewhat frustrating journey home.

Not, however, as frustrating as last year’s journey home. It was just me and number two son on that occasion. We were the best part of an hour into our journey, and making good time, when we realised that our suitcases were still at the hotel. We’d left them in the little room next to reception when we checked out before going to play the last game and both of us had assumed that the other one had put them in the car before we left. So our anticipated four-hour drive turned into a six-hour one as we had to go back for them. Our ‘team-mates’ who were still at the hotel were suitably sympathetic and rather thoughtfully moved our cases into the bar so they could oversee their collection.

Returning to this year. We were about twenty minutes from home and I was driving my son’s car. Having stopped at a junction, I attempted to select first gear, only to find that the gearstick didn’t want to oblige. I tried a little harder and there was a clunk, followed by said gearstick taking on a slightly less conventional attitude, insofar as I could now rotate it through 360 degrees but couldn’t select any of the gears with it. As luck would have it, it turned out that the car was stuck in second gear rather than neutral and we managed to limp slowly home. The next day we changed our plans for the morning and limped some more, to a local garage, where the problem was diagnosed as a broken linkage and my wallet was lightened to the tune of two hundred and thirty quid. Oh well, at least it wasn’t a broken gearbox. And at least it didn’t happen while we were on the motorway, which would have been a tad more interesting.

From a business continuity point of view, four things spring to mind :

1) Time pressures and other priorities often divert us from our business continuity activities, even though we know they’re important. The results include out of date plans, incorrect contact information or strategies and solutions that are untested or, worse, no longer fit for purpose. None of which are particularly desirable, especially when they become apparent when we’re trying to activate our plans for real.

2) They say that time flies when you’re having fun, but it also flies when you’re up against it – like when you’re responding to or managing a crisis or major incident. So anything we can do to reduce the time it takes to contact key personnel, make key decisions and take key actions is likely to be beneficial.

3) If you’ve been reading my blogs and/or Tips of the Month for a while, or have spoken to me for more than about three minutes on the subject of business continuity, you’ll know my views on assumption. Well, I rest my case (no pun intended) – last year’s luggage episode only served to further support my contention that assumption is the mother of all foul-ups.

4) Murphy’s law is alive and well and no-one is immune to it – especially me, it would seem. So things go wrong, stuff breaks and people do stupid things. ‘Twas ever thus. So the “it’ll never happen to us” approach is really just asking for trouble. If you’re in that camp, I wish you luck.

Notwithstanding a few inconveniences and irritations, we managed to survive our sixth Easter hockey festival relatively unscathed and are looking forward to the next one. You never know, I might even write a blog about it – probably sometime in May, if I get around to it.