Going off the rails

I started writing this blog absolutely ages ago, as a continuation of the story in ‘Time off in loo’. I’ve just stumbled across it languishing forgotten and forlorn in my drafts folder, so I thought I should do the decent thing and put it out of its misery.

I mention this because a) whilst it’s taken me the best part of eleven months to finish the blog, I don’t want you to think it’s taken me that long to finish my little DIY project and b) in the unlikely event that a certain supplier of bathroom-related products reads this I don’t want them to think that time has, in any way, healed any wounds whatsoever.

‘Time off in loo’, outlined the trials and tribulations of fitting a downstairs cloakroom and I thought I’d pretty much said all there was to say on that score. When I posted that blog, there were a few finishing touches to be done, but nothing worthy of note and certainly not worthy of a blog. Or so I thought.

One of those finishing touches was the installation of a towel rail. Simple, you’d have thought. As did I. Not so. 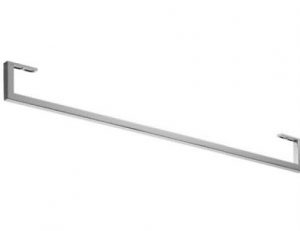 The towel rail in question is not a complicated thing. Picture a metal bar just over a metre long that’s had the last few centimetres at each end bent up at ninety degrees and you’re pretty much there. The two short bits attach to the underside of the shelf (or ‘console’, according to the poncy brochure) that the hand basin sits on, via a couple of brackets that screw into their ends.

The first challenge was to procure said towel rail. The manufacturers don’t sell direct to the public so we had to go through one of their agents. Unfortunately, the agent in question had spectacularly disappointed me and Mrs Oz with their unique brand of ‘customer service’ when we bought the ‘console’ and some other bits and pieces from them. That’s another story, involving an inordinate amount of personal anguish that I’ve just about managed to put behind me, so, if it’s all the same with you, I won’t re-open that particular wound here. Against my better judgement, however, we tried them again.

We spent what seemed like days explaining what we meant by ‘towel rail’. I thought “a metal bar that you screw underneath the ‘console’ and hang towels on” was fairly descriptive but the lady assigned to ‘help’ us just couldn’t distinguish between that and the heated radiator-like variety that she was clearly more familiar with. We eventually achieved some kind of meeting of minds after I drew her a picture and the towel rail was duly ordered. It took a while to arrive, but that was OK as I had a bathroom to install before I could fit it. But arrive it did, accompanied by the wrong brackets. It seems there are two types – one for hanging the rail underneath a ‘console’ and one for screwing it to the front. Despite my detailed description and impressively realistic artwork, the wrong ones had been ordered.

Because of the length of time that had passed since placing the order – that and a burning desire never to set foot in the shop again if I could possibly help it – we contacted the manufacturers direct, explaining the situation, offering to send the offending brackets back to them and asking if they’d be kind enough to send us a couple of the correct brackets in return. The response from their ‘customer service’ representative was quite rude. It wasn’t quite “bugger off” but it was pretty close, the gist being “your contract is with the agent not us so we’re not interested and you’ll have to talk to them”.

Now I don’t know about you but I didn’t consider that to be top notch customer service. OK, I understand the “your contract is with the retailer” thing but a) there are ways of saying that and b) given that they probably have bucket-loads of brackets and we’d offered to send the wrong ones back at our own expense, it really wouldn’t have killed them to pop a couple in the post. In which case I’d have subsequently extolled their virtues and probably would have bought other stuff from them in the future, neither of which I now have any intention of doing.

The big issue to me was their attitude. Whilst the retailer was just incompetent, the manufacturer was downright rude and obnoxious. Which in my book is deserving of names being named. But that would just be petty and unbecoming of me, so I’ll content myself with saying that the manufacturer in question (whose name starts with a D and ends with a T, incidentally, just in case you were curious) for the sake of an envelope, a stamp and some common courtesy, has lost a customer. Permanently. Shame, really, as some of their kit’s quite nice. If a bit over-priced.

So we grudgingly went back to the agent and explained our little problem. They too were disgusted at the attitude of the supplier (whose name also includes a U, an R, an A, a V and an I – I tell you this purely to ensure I don’t accidentally tar any innocent purveyors of bathroom fittings with the wrong brush) and promised to try and sort things out. I’m not entirely sure how sending us an e-mail telling us our own address and ‘phone number helped, but I’m sure they knew what they were doing.

In the meantime, my quest for some suitable brackets continued. Now, these aren’t exactly bog standard brackets, for reasons I won’t trouble you with, as fascinating as a discussion on bracket thickness and countersinking depth might be to some. So finding a suitable alternative proved harder than I’d anticipated. But I finally got hold of some that looked like they’d do the job.

The issue now was screws. Again, I won’t inflict the minutiae on you, as I suspect, if you’re still with me, you’re rapidly losing the will to carry on. Suffice to say that standard screws were just too, well, standard for these non-standard brackets. Refusing to pay the extortionate price of £4.99 for a measly ten screws at the local DIY store (who, for now, will remain nameless, although I may well, at some point return to their policy of removing all of their checkout operators in favour of self-service scanners, a large percentage of

which aren’t working at any given time – they seem to like the colour orange, by the way), I opted for a company that sells lots of screws. I bought a box of a hundred for £2.99. Unfortunately they didn’t quite work, so I went back the next day and bought a hundred of another type, which did the job admirably. I used four.

Incidentally, I don’t want you to get the impression that I’m tight. I just don’t like being ripped off. For instance, I’m heartily fed up with having to pay an utterly ridiculous amount of money for a bucketful of lukewarm, third-rate coffee from a pseudo-Italian or American chain, on the grounds that between them they have a monopoly on coffee supply throughout the UK motorway network and the majority of our high streets. Firstly because the quality is so poor and secondly because, having done a barista course a while ago (I have a certificate and everything) I know how much a shot of coffee actually costs. Unlike them I also know how to make a coffee with hot milk. Which, incidentally, I like to call ‘normal’, not ‘extra hot’.

Having got that off my chest, I suppose I should at least make a token effort to relate the above nonsense to business continuity management? Two things spring to mind.

Firstly, when things go wrong, which they do from time to time, the way we  handle them and, just as importantly (if not more so in some cases), the way we communicate with our stakeholders, can have a huge bearing on their perception of us and, therefore, on our reputation. Some organisations get this and ensure their spokespeople – which, incidentally, includes front-line customer-facing staff as well as the board-level media spokespeople – but sadly there are plenty of others (and history is littered with their smouldering remains) who spectacularly miss the point.

Secondly, I have a bit of an issue with quantity over quality when it comes to business continuity plans as well as coffee. It’s summed up by the following quote, differing versions of which are (often spuriously) attributed to various public figures, including Benjamin Franklin, Winston Churchill, Mark Twain and Cicero. This one’s apparently from Blaise Pascal, although I suspect he might have said it in French…

“I have made this longer than usual because I have not had time to make it shorter”.

I see lots of business continuity plans and some of them are absolute monsters. Largely because very little thought or effort has been put into their production.

Now I can write a lengthy tome with the best of them. Take this blog, for instance, which was supposed to be around 500-600 words, whereas it’s up to 1541 so far (and, believe it or not, I’ve edited and shortened it several times already). With a little more effort I’m sure I could distill it further but I don’t have time today. So you’ll have to take it as it is. In which case some of you probably won’t have got this far. Which is pretty much the point really.

I’m off now to peruse my drafts folder for more unfinished business in the form of yet-to-be-completed blogs. My business with the two organisations that played a starring role in this blog is, I regret to say, well and truly finished.