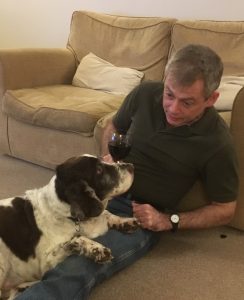 During a recent, admittedly somewhat one-sided, conversation with Barney (see ‘20/20 hindsight‘, ‘Not what it seems‘, ‘Horses for courses‘ and ‘Paws for thought‘, amongst other previous blogs), after a couple of glasses of wine, I have to confess, it struck me that he and I are actually the same age* – assuming you buy into the generally-accepted dog-years to human-years ratio. I’ll leave you to work it out for yourself but, suffice to say, Barney and I have both reached late-ish middle age at the same time. Which explains a lot,  at least if certain members of my family are to be believed. Because it’s been suggested, somewhat unfairly in my opinion, that we share some common late-ish middle age-related traits.

These traits (allegedly) include, in no particular order :

Frankly, I think I’m getting a bit of a bad press here and, having discussed it at length with Barney (after a couple more glasses of wine, admittedly, and way past what some others might consider to be our respective bedtimes), he’s assured me that he feels the same. Where Barney and I differ is that I like to think that, for me, age has brought (aside from the grumpiness), at least a modicum of wisdom and that I’ve learned from my experiences over the years, whereas, in his case, every day has, with the odd exception, pretty much been Groundhog Day.

So, where are we going with this, you may be wondering (as, indeed, was I when I arrived at this point!). Well, it’s like this…

Firstly, at the risk of getting all Einsteinian – which, to my delight, my dictionary tells me is an actual word – time is relative. One example of this is mentioned above, insofar as it’s commonly thought that one human year is equal to seven dog years (whether Barney sees it the same way is another question – I’ll ask him next time we have one of our little chats). Another, which is slightly more relevant from a business continuity point of view, is that it’s common for IT people to have a very different view to that of the business users as to what constitutes a recovery time objective, which is, in my experience, a significant cause of misunderstanding and fundamentally flawed strategies. My advice here, radical as it may sound, is to get the IT and business people to actually talk to each other about it, thus avoiding misunderstandings and incorrect assumptions.

Secondly, there are a lot of people in the business continuity world whose claim to fame is that they have ten or twenty or more years’ experience. But, as a very experienced beekeeper once told me, there’s a world of difference between someone with twenty years’ experience and someone with one year’s experience twenty times over. So, if you’re considering getting someone to help you with your business continuity program, I’d suggest you look for someone with real depth of experience, rather than someone who’s just repeated the same old formulaic stuff a few times; a product of the ‘Groundhog Year’, if you will. 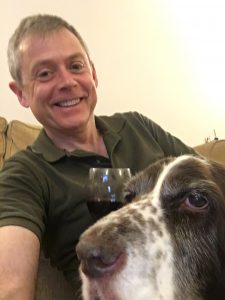 Let me know if you’ve managed to work out my and Barney’s respective ages, referred to in the opening paragraph. I do hope, however, you didn’t spend too much time trying to do so without first having read the footnote below!

*At least we were when I started writing this blog. In typical Oz fashion, I started it a while ago, but it’s taken some time to finish it, so it’s only fair that I should mention that Barney and I have both had birthdays since then.