From blog to book

On Wednesday I wrote a book.

Now, before I get picked up on a technicality by someone in the know,  I have to admit that it was actually a few Wednesdays ago, but I’ve only just got round to posting this blog so I hope you’ll forgive a little bit of poetic licence.

That’s the first porky* out of the way. The second one is that I didn’t actually write a whole book in a day. That would be ridiculous. It generally takes me at least a day or two longer than that. What I actually did was finish off a book that I’ve been writing, on and off, for quite some time. And that finishing off involved the addition of an introduction, an ‘And finally’ section and one or two other small bits and pieces.

To be honest, the rest of the book was a bit of a doddle really.  It largely consisted of a copy and paste job – albeit a fairly substantial one – on a load of existing material, in the form of the blogs I’ve written to date. Plus the odd bit of tidying up, or editing, as we in literary circles like to call it, and several rounds of proof reading by Mrs Oz, proof reader extraordinaire.

“Why?” I hear you ask. Which is a reasonable question. Well the answer is quite simple – because some people suggested that I should. And because I then said I would. And, it has to be said, because I didn’t think it would be that onerous a task. I really should know better though. My previous books, ‘Practical Business Continuity Management‘ and ‘Risk Management Simplified‘ came about as a result of me thinking I could just recycle some of the stuff I’d written previously – my Tips of the Month, materials from my training courses and such-like. And, whilst the theory seemed good, I found there was just a teeny bit more to it than that.

Which is interesting. Because quite a few people think it’s possible to produce a business continuity plan via the noble art of recycling. And a sizeable amount of copying and pasting of existing material – usually in the form of someone else’s business continuity plan (at least my copy and paste job involved my own material!). And they think that’ll do the job.

But, aside from the possible copyright and intellectual property-related issues, simply copying and pasting a whole load of stuff and expecting to end up with something that will actually work when it’s needed is an object lesson in self-delusion. Because, whilst the copier and paster might end up with something that, at first sight, looks the part, the proof of the pudding, as they say, is in the eating. And the proof of the business continuity pudding (or plan, as it’s more usually called) is in the capability that underpins it. And no amount of copying, pasting, re-formatting and prettying up is going to address that small matter. 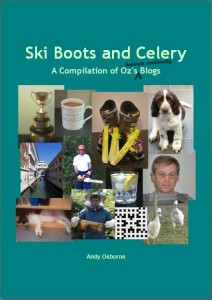 Back to my new book. After all, I’d be daft to pass up the opportunity for some shameless self-promotion. And if I can’t shamelessly promote my own stuff on my own blog site where can I?

The book is called ‘Ski Boots and Celery’, after one of my favourite blogs, and it’s available as a downloadable e-book here. I’d be eternally grateful if you could find it within yourself to support a struggling author – with a wife, two teenagers, a spaniel and several chickens to feed – by buying it. Obviously I’d quite like it if you then read it rather than just putting it on your bookshelf next to your unread copied and pasted business continuity plan!

PS I’m offering a free copy of ‘Ski Boots and Celery’ to any of my blog readers who are willing to read it and write a short review. If you’re interested either post a reply or e-mail me at aosborne@acumen-bcp.co.uk

* for those not familiar with the term “porky” (like most people outside the UK, I suspect) it’s Cockney rhyming slang : porky = pork pie = lie. Obvious really!

Related articles : ‘Easy peasy‘; ‘A BC capability vs. a BC plan’; ‘Perfuming the pig!‘