A bird in the hand

Last year I had ‘one of those’ train journeys. I suppose it’s only to be expected when you’re travelling on a third world rail system. Like the one we have in the UK, for instance. Many of you will, I’m sure, have had similar journeys – the ones where the train stops in the middle of nowhere and sits there for hours, with passengers (I prefer the word ‘customers’ but the train operators don’t seem to have made this mental leap yet) given absolutely no information about what the problem is or how long things are expected to last. It turned out to be a broken-down goods train in our way and two-and-a-half hours respectively.

The result was that I missed my appointment in London and had a wasted journey. As long-standing (or, perhaps, ‘long-suffering’) readers of my blog will know, I’m not one to complain – unless it’s warranted, obviously. So I sent a stroppy email to First Great Western, the train operator. Many, many, many weeks later, long after I’d given up any hope of a reply, I received a letter from them, the gist of which was “sorry for taking ages to reply but you’re just not important to us”, followed by “tough, not our fault so we’re not paying you any compensation”. The latter part struck me as a bit odd, because included with the letter were a couple of rail travel vouchers, which looked for all the world like compensation to me.

The vouchers were valid for a year. After they’d sat on my desk for eleven months and two weeks, I thought I ought to make use of them before they expired. So Mrs Oz and I plumped for a day-trip to Hereford, because a) we can get a train there from Evesham, our nearest station, b) we’ve never been to Hereford, c) it would be quite interesting to see the medieval Mappa Mundi that’s in Hereford cathedral and d) two off-peak, cattle-class return fares came to almost exactly the value of the vouchers.

I should have known things weren’t going to go well when a rather irritated lady in the station waiting room told us she was trying to get to Worcester Foregate Street (one of the stations on the way to Hereford) but two trains had been cancelled so far this morning. Her complaint was almost drowned out by the overly loud young lady (I use that term loosely, by the way) who obviously felt that the whole waiting room was interested in her ninety-decibel discourse on whether putting lots of milk in a cup of tea that had been stewing for ten minutes, or made with two tea bags in one cup, would make it weaker. Dur! I subtly suggested to Mrs Oz that we watched carefully to see which carriage she and her friend/carer got into and chose one as far away as possible. Which we did, and the world and I were as one again. For a while, at least.

Hereford is a little over fifty miles from Evesham and there are seven stations in between. We made it as far as Worcester Shrub Hill, the second stop, a mere nineteen miles and, on a normal day, nineteen minutes by train from Evesham, where we were told that our train was terminating. It had, apparently, been cancelled because it was running late – the subtext to which was, I suspect, “and we get fined for late running trains but not for cancelled ones”. The only other information we were given was that we should go to the information office on platform one for more information.

So we disembarked and were almost swept off our feet by a tsunami of passengers stampeding towards the information office. Gentleman that I am, I resisted the urge to elbow the rude old lady who pushed in front of us out of the way. As it turned out, this would have proved fruitless, as while we were in mid-stampede we were told to get back on the train we’d just got off because it would now, after all, be carrying on to Worcester Foregate Street, where we were to change to the next Hereford-bound train.

We dutifully got back on the train and sat down, only to be told five minutes later to get off again as the train was, in fact, still cancelled and still wasn’t going anywhere after all. The excuse this time was that they didn’t have enough staff – although three people in First Great Western uniforms appeared in our carriage to tell us this.

Several of the passengers were, understandably, by now quite irate. The lady in the seat behind us was really getting her knickers in a twist, because when we first got off the train she and her family had cunningly decided to take a taxi to Worcester Foregate Street, which, if they’d continued with their plan, would have got them there in time for the next Hereford train. That opportunity had now evaporated, so her knicker-twisting was, I felt, quite justified. I’m pleased to report that I remained remarkably – and, in fairness, unusually – calm, rational and untwisted in the knicker department, given the provocation (honestly, you can ask Mrs Oz). We decided, very calmly and rationally, that, rather than mess around any longer, we would bin the Hereford trip on the grounds that if and when we finally got there it wouldn’t be long before we had to turn around and attempt to get home again. So we stayed in Worcester, strolled into town and had a coffee, accompanied by a massive slice of cake, which effectively scuppered our plans for lunch. 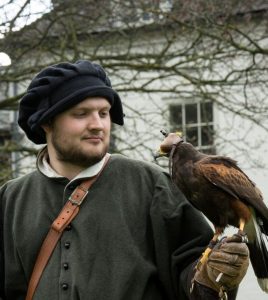 We had a bit of time to kill before our train back home, so we had a stroll around Worcester, which took us past the cathedral. In the grounds we happened upon a small tent, in front of which were two chaps in strange costumes – it transpired that they were wearing the garb of Tudor falconers – and half a dozen birds of prey, including an absolutely humungous owl. A small crowd had gathered, comprising a few adults and about twenty children, all listening intently to one of the strangely-clad men, who was telling them about the birds’ diet of bits of raw chicken and day-old chicks.

So we stayed and listened for a while. Very interesting it was too. As well as the attire of the period, we learned about how Tudor falconers were held in high esteem, even by royalty, their training methods and a whole bunch of arcane falconry terminology. We also learned that the display was part of a school project on the Tudors that the children were doing, and we’d apparently gatecrashed it.

Before we could melt subtly into the background, the chap who’d been doing all the talking asked for three volunteers, which, to the obvious disappointment of the children, had to be adults. “You madam, you madam and you sir”, he said, pointing at two ladies standing behind the children and me. So, not only had we intruded on a school gig, but now I was going to be part of the falconry display. Oh well, in for a penny, in for a pound. 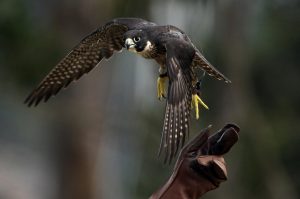 He gave us each a gauntlet, arranged us in a triangle, about twenty meters apart on the grassy area next to the tent and handed us pieces of raw, un-plucked chicken. His assistant then released his hawk, which swooped low over the field and up onto falconry assistant number one’s gauntleted hand, where it paused to eat the piece of feathery chicken before moving on to me and then to assistant number three. The process was repeated a couple of times and the bird returned to its handler who fed it some more chicken and popped its hood on.

After a brief conversation about how many day-old chicks a bird like ‘ours’ might consume in a day, I thanked the falconer and returned to Mrs Oz, who, looking a little flushed, told me that, while I was merrily performing my impromptu lead male role in the falconry display, she had been grilled on our respective roles at the school and, on discovering that we didn’t actually have any, what we were doing there. Discretion being the better part of valour, we beat a hasty retreat, thereby leaving a starring role in a falconry display for a front row seat at the drug-dealing performance down by the river.

Our ‘free’ trip ended up costing us almost as much as the tickets’ value in a day’s doggie hotel fees for Barney. And we got to add the Mappa Mundi to our ever-lengthening list of famous artefacts that we’ve tried, but failed, to see. It was, however, better than working.

Two things about our day out struck me, from a business continuity point of view.

1. As I’ve mentioned in a couple of previous blogs, the best laid plans often go awry (see ‘The skiing bug‘ and ‘The best laid plans‘). So we need to ensure sufficient flexibility, both in the plans and the people tasked with putting them into operation, to ensure they’re able to cope with the Murphy’s Law factor.

2. Communication is key. In an abnormal situation people want to know what’s going on, what’s expected of them and what they can expect. In both of the above train-related situations the passengers got none of those things and, unsurprisingly, several got agitated and anxious (and stroppy) as a result.

With regard to slightly more serious situations than sitting on a stationary train feeling a bit miffed, I’d go as far as to say that, in my experience, communication is the key issue for a crisis or incident management team. “But what about the people issues?” I hear you cry, my response to which is that dealing with the people issues arising from a crisis is almost entirely to do with communication.

Which implies that we need to put a bit of effort into our crisis communication strategies and plans. Perhaps a teeny bit more than merely including a bullet point in the plan that says something like “communicate with key stakeholders as appropriate”, which is something I’ve seen far too often.

That evening number one son asked how our ‘day out’ had gone. After we’d finished telling him he asked, with a somewhat exasperated look on his face, “Can’t you two go anywhere without something (expletive deleted) weird happening to you?”. He does, I fear, have a point.

Related article : ‘A bag of spanners‘; ‘The big issue‘

I’m looking for volunteers to review the manuscript and give their thoughts on layout, etc. If you’d like to do so, you’ll be handsomely rewarded with a free copy when it’s published – not that you’ll need one because you’ll already have read it!

Drop me a line (aosborne@acumen-bcp.co.uk) to let me know if you’re interested.